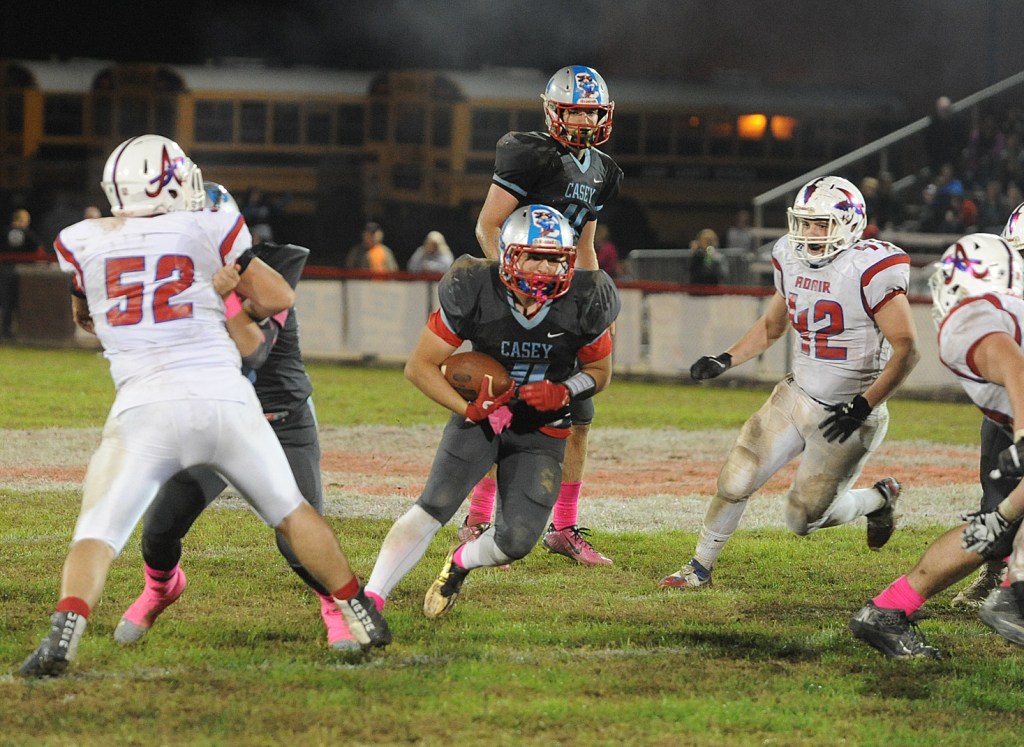 Mike Marsee/For The Advocate-Messenger Casey County running back Dalton Summers makes his way through a hole on his way at the start of a 35-yard touchdown run in the third quarter.

LIBERTY — Casey County accomplished so much during the regular season, but this is not the time to look back.

The Rebels set their sights squarely on the possibilities ahead of them Friday night after they completed their schedule with a 36-26 victory over Adair County that they said better prepared them for the postseason.

Host Casey, ranked No. 8 in Class 3A, overcame a two-touchdown deficit to get its eighth win, equaling the most in school history in a single season. But moments after the game ended, coach Steve Stonebraker reminded his players of all the things they can still do.

From setting that wins record to winning a playoff game for only the second time in school history to going deeper into the postseason than the Rebels have ever gone before, there is much they can achieve in the coming weeks.

“Every week now there’s something else to add to their legacy. They have a lot to play for, so they should be motivated,” Stonebraker said. “They’ve done a good job all year working hard in practice and having good attitudes and being focused on Friday nights, and that’s what it’s going to continue to take, one week at a time, in the playoffs.”

It’s all about the playoffs now, and Stonebraker said Friday’s game will go a long way toward getting Casey (8-1) ready.

“It’s good to get that psyche going into the playoffs where you know you can pull out close games, you know you can make comebacks when you’re down, because playoff football is going to be like that,” he said.

The Rebels did some of their best work on defense in the second half, shutting out Adair (7-3) and holding the Indians to 48 yards after halftime after they had racked up 26 points and 224 yards in the second period.

“I’m really proud of our defense and the way they pursued to the football in the second half,” Stonebraker said. “We had a lot of energy, and the guys were intense about finishing plays, and that made the difference in the second half.”

Casey defensive end Austin Campbell said the players were a little too high-strung in the first half.

“We had to calm ourselves down in the second half,” Campbell said. “The first half we were way too up, and we got everything going everywhere in our heads, and we just had to tighten up.”

“We had to knuckle down, we had to focus on our own jobs and just pick up the intensity,” linebacker Gary Propes added.

Adair mounted only one serious scoring threat in the second half, which came after Casey had taken a 10-point lead on Preston Tucker’s 51-yard touchdown run with 7:48 remaining.

The Indians’ Jordan Lasley returned a kickoff 45 yards to the Casey 27-yard line, and they got all the way to the 7 before the Rebels’ Collin Allen stopped Adair’s Lonnie Grant for no gain on fourth-and-1.

“We were definitely fired up,” Campbell said. “That was definitely a big stop.”

Adair never got the ball back, as Casey ran off the final 5:00 by running for 74 yards and three first downs.

“The other thing that’s great to see is when we get into the four-minute drill — this is the second game we’ve had where it’s a close game at the end — and we’re able to move the ball and run out that clock,” Stonebraker said. “That makes a huge difference.”

Dalton Summers rushed for a game-high 88 yards for Casey, and he scored the go-ahead touchdown on a 35-yard run late in the third quarter.

Five different players scored touchdowns for Casey, including quarterback Breece Hayes, who scored on a 5-yard run in the closing seconds of the first half to pull the Rebels within 26-21 after Adair had scored four times in 5 1/2 minutes.

Shymez Brabson caught three touchdown passes totaling 84 yards in the second quarter. Two of them were on slant plays, and Stonebraker said a halftime adjustment took that play away in the second half.

Casey scored on its first possession, as Alex Mendez scored on a 2-yard run right after Hayes connected with Tucker for a 43-yard pass play, and the Rebels took a 14-6 lead midway through the second quarter on Hayes’ 34-yard touchdown pass to Collin Miller.

Hayes was 14 for 25 190 yards, and Miller caught seven passes for 57 yards. Hayes has 2,130 passing yards for the season, the first Casey quarterback to ever pass for more than 2,000 yards in a season.

“Our offensive line did a good job of controlling the line of scrimmage the entire game,” Stonebraker said.

Casey has been in control for much of this season, and the Rebels are assured of finishing with the best record in the school’s 42 years of football.

“It’s been amazing,” Propes said. “We didn’t think it was going to happen at the beginning of the season, but we just gave it our best.”

Now the Rebels begin to prepare for a rematch with Powell County (4-6) this Friday in the first round of the Class 3A playoffs. They defeated the Pirates 37-0 in their season opener Aug. 19.

Propes said this game showed the Rebels that they need to sharpen their focus this week.

“It shows us that we need to work better and focus more in practice,” he said.