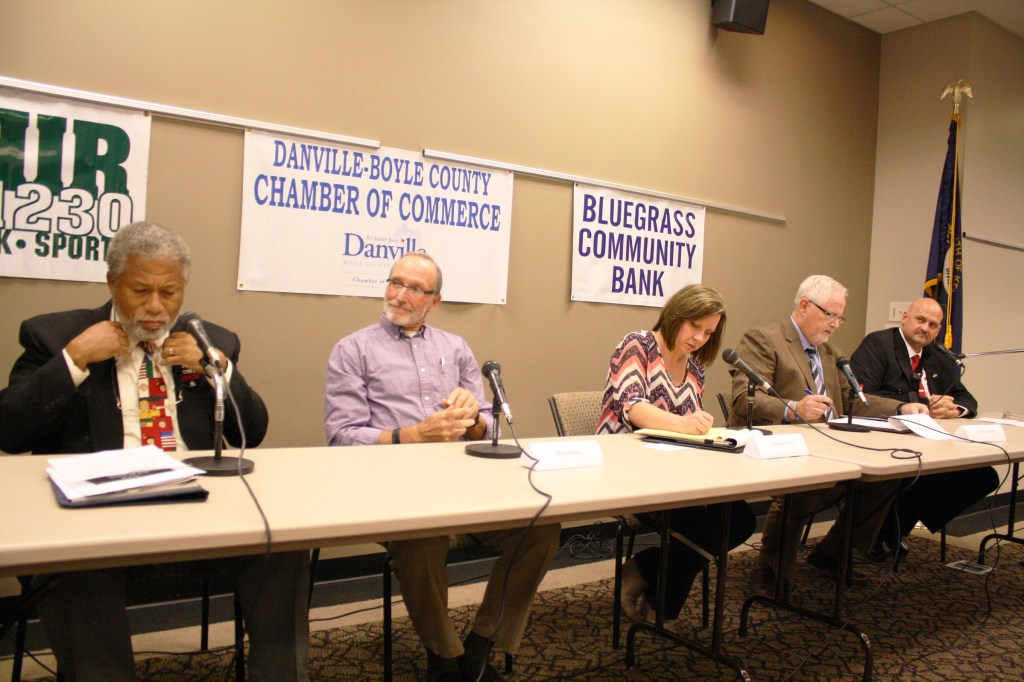 The four current members of the city commission were in agreement on many of the community issues discussed at the Danville City Commission forum on Thursday. The lone challenger in the race, James Monroe differed in his opinions on several issues, particularly Weisiger Park.

Asked whether the recent renovations to Weisiger Park were worth the cost, the four incumbent candidates were optimistic.

“I have fought many battles and it has come together a lot better than imagined,” Terry said.

She said she would have liked to have seen things done differently, but the city was able to save $100,000 on the project. The commission made changes that saved money on the project, she said.

“I am happy with it, and I hope the citizens are too,” Terry said.

“The price tag was over budget,” Serres said. However, he said there were several people who put in a lot of effort to help plan the project.

Serres said the park needs time to mature, but it is getting a lot of utilization.

Commissioner Kevin Caudill said the project took longer than any of the commissioners intended it to take, but it is now something to be proud of.

“It’s nearly a year-round venue for a number of things,” Caudill said.

Monroe said the changes to Weisiger were not worth the cost.

“The main thing I hear from the public, going door-to-door, is about the park and they are not happy,” Monroe said. “There’s a lot of people who feel it was money that could have been better spent elsewhere.”

He said there were other things that he thinks were at a higher priority than fixing up the park.

“Tackling the heroin issue, strengthening the police department — any of those things would have been a much better use of that money,” Monroe said.  “It is more important for (the community) to be safe than it is to have a concrete area as a park.”

“I think it’s something the citizens of Danville should be proud of for a long time,” he said.

The first question of the night revolved around Danville and Boyle County sharing expenses. Nelson asked if the candidates saw equitable sharing of the expenses between the two governments and if they see any other opportunities for them to work together.

Atkins said it’s great to have a relationship with Boyle County, but there are departments that need to be strengthened.

Terry said the city commission has brought stability to the relationship.

“We have reached out to the county and have tried to communicate with them numerous times, and most of the time, that has worked,” she said.

“We are making strides in the area of our partnerships,” Caudill said.

He said some are more equitable than others, but that is something they will need to work on.

“I think communication is better, and that is where it typically starts,” Caudill said.

“It comes down to the fact that we are one community,” Monroe said. “We have to get things done and work together and do what is best for our community.”

When asked about the recent expansion of code enforcement, all of the candidates agreed stronger enforcement is needed.

Monroe and Atkins said there needs to be consistency within the code enforcement.

Terry said tearing down properties is not the answer and the city needs to use creative methods to help improve properties instead.

Nelson asked the candidates if they would support an overhaul of the current alcohol regulations in Danville in order to make them less complex or burdensome for business and events.

Caudill said he would support an overhaul, but it is really needed at the state level.

“I think that’s where we need to start,” he said. “I will be in favor of simplifying it — not sure if we can do that as a city.”

“The main thing we can do is set the rates and show we are using that money for alcohol enforcement,” Monroe said. “I believe we are doing that.”

He said they city could see if the rates could be lowered to help boost sales, but doesn’t see a problem with alcohol sales in Danville, as there sales are quite robust.

Akins said he is in favor of regulations, but would be on board with the commission if they wanted to review them, as well.

“There needs to be a strong enforcement on regulations on the consumption and the sale of alcohol in our community,” he said.

Serres said he would also be willing to look over the regulations and consider change, as there have been problems in the past with the Brass Band Festival and the Kentucky State BBQ Festival. He said regulations should be fair for everyone.

“We do need to be remember that we need to be business-friendly while also enforcing the law,” Terry said.

She said she thinks that is where people are having issues with the regulation.

She said if that can be done in a better way, that will help Danville become more business-friendly.

The candidates were asked about the Economic Development Partnership and what Danville’s role should be with the EDP.

The candidates mentioned how there has been a rough relationship between the EDP and the city, but regardless of that, they support the EDP and their efforts. The problem that arose during the discussion was creating jobs in Danville.

“We are working towards the best thing for the community, and one of the things we need are jobs,” Monroe said.

He said the city needs to work with the EDP and do what they can to help bring the factories and other jobs to Danville.

“Whatever it takes, we need jobs here,” Monroe said.

Terry said this is not the same kind of workforce that was in Danville in the 70s and 80s.

“We can’t rely on factories,” she said. “The millennials are not going to stand on an assembly line to put things together for 20 or 30 years.”

She said the city and and EDP need to think about the companies and jobs that they ask to come to the community.

Caudill said they need to rethink who are recruiting.

Nelson asked about the potential need for a new pool or aquatic center and it was agreed among the candidates that there is some sort of need in the community for such a facility.

“We are taking our kids all across the state for what we don’t have in Boyle County,” Atkins said.

Terry said there is money being lost due to parents taking their children out of the county. She said she thinks Boyle County is behind because there isn’t a pool for everyone to go to.

“If you look around Danville, we have the best in everything except that,” Caudill said.

Serres brought up the Bunny Davis Center and said it’s smart to look at the possibility of either completely renovating the center or moving the pool elsewhere.

Monroe said there needs to be study done to see what the city or county can support.

The candidates were asked if they thought the former BISCO building, now owned by the city, was being used to its full potential and if available space should be leased out.

The candidates said they felt as if the building was being used, but it would be difficult to rent out the empty space.

Monroe said if you start to put other businesses in the building, it could create many other issues. He said there is so much dust and dirt in the empty sections that it would be hard for for others to use the building.

Monroe said he doesn’t see there being a lot of grant money available in the future, so it it is something that can’t be a priority right now.

“We have to fix the problem areas first,” he said.

Nelson asked about the farmers market location and what can be done to make a permanent location.

It was agreed that there needs to be permanent location with outdoor and indoor areas, but space is an issue.

Atkins said it comes down to money. He said there were several places suggested last spring, but they were not acceptable locations.

Terry said she thinks Weisiger Park is a great location and everyone could set up tables instead of selling out of their cars.

The pipeline project has been a hot topic, and it was brought up once again at the forum. All of the candidates said they are against the Kinder Morgan proposal and don’t see any benefits to the community if the energy company is allowed to reverse the flow of the Tennessee Natural Gas Pipeline No. 1 and use it to transport potentially dangerous natural gas liquids.

“I think it’s very simple — they want us to take the risk with no benefits,” Terry said.