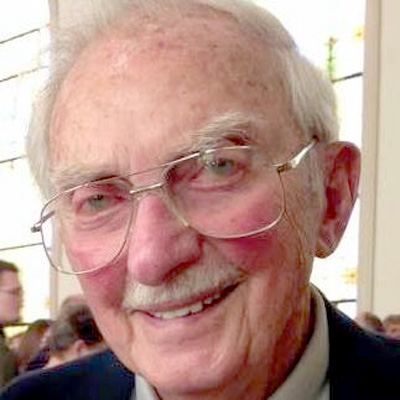 The Rev. Robert Wollenweber passed away peacefully at home Oct. 21, 2016. He was born May 24, 1925, in Detroit, Michigan, the son of Frederick and Helen Wollenweber. Following service in the Marines in WWII, he attended Houghton College (NY), where he was named Alumnus of the Year in 1991, and Gordon Conwell Seminary (Massachusetts). In 1949 he married Wilma Lange. They had three children, Elizabeth, Faith and Mark; seven grandchildren, Benjamin, David, Jonathan, Elinor, Matthew, Nathan and Jack; and two great-grandchildren, Mallie and Nathanael.

Bob pastored churches in Massachusetts, Rhode Island and Illinois. He served in Quito, Ecuador, in radio and TV ministry; was executive director of Chapel of the Air in Wheaton, Illinois; and was area director in Connecticut and Rhode Island for Prison Fellowship.

In 2000, he and Wilma went to Zambia for a short term mission to teach in a Bible College. They retired to Brevard, North Carolina, in 1992 and then moved to St. Andrews Retirement Community in Richmond in 2011.

A memorial service will be held at Richmond First United Methodist Church on Saturday, Nov. 5, at 11 a.m. Memorial gifts may be directed to Richmond FUMC or to ITeams, 411 River Road, Elgin, IL 60123 or Give.iteams.US and marked for Anti-Human Trafficking in honor of Bob Wollenweber.