LOOKING BACK at Kentucky School for the Deaf 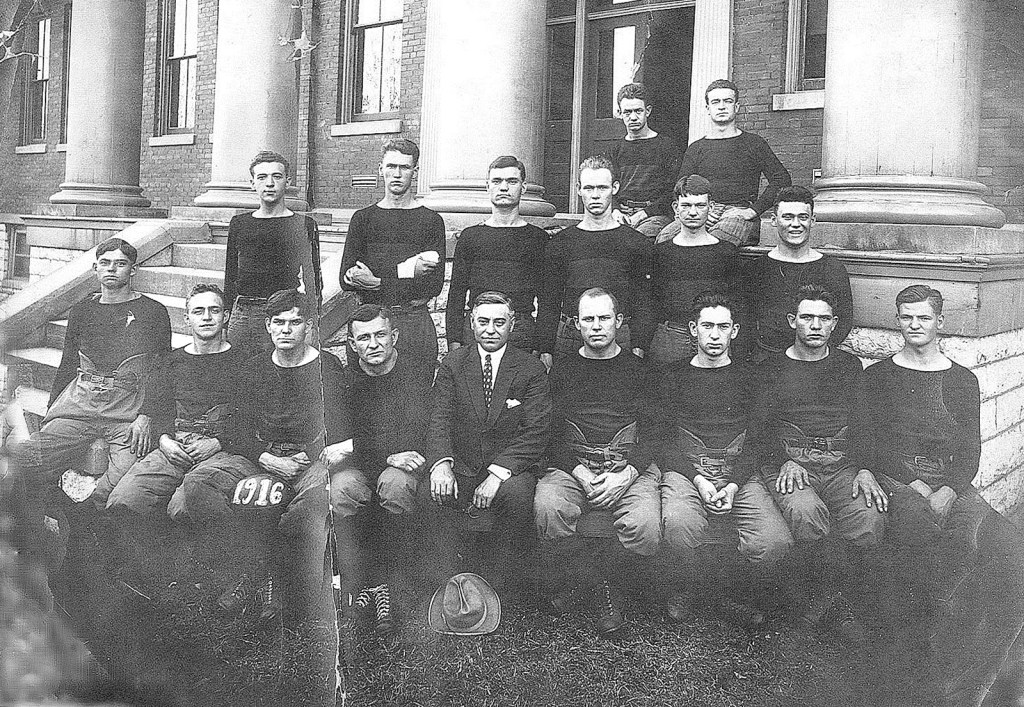 In 1874 Kentucky School for the Deaf began publishing a weekly in-house newspaper, the Kentucky Deaf-Mute, to give the male students an opportunity to learn the printing trade. KSD published the newspaper continuously from 1874 to 2004 with only a name change in 1896 – to the Kentucky Standard. From 1883 until 1942 George M. McClure was the editor of the paper. His relationships with students and wide connections with schools for the deaf throughout the country give a glimpse of the life of students and staff in a residential school for the deaf and show how the community touched the lives of students and staff at the school.

We shall send the first few issues of the Deaf Mute to the parents of the new pupils on trial. We think they will find it worth the price we ask for it – seventy-five cents for the school year – and a means of keeping themselves informed of what goes on at the institution. If any of them wish to subscribe they should send in their names and the money at once as we will shortly make up our list for the school year.

Our Matron’s flowers turned out well this season and it is a pity that the work of tearing up the beautiful beds must soon be begun. But Jack Frost will soon be here and the more tender plants must be under cover against his coming…

We had a splendid garden this year that yielded us lots of nice vegetables and that still supplies us with such as are in season. During the summer the housekeeper’s department worked hard to put up an abundant supply of edibles and a peek into the pantry reveals shelves loaded with jars and cans of toothsome edibles.

The College correspondent of the Deaf-Mute Register indulges in the following bit of exaggerated pleasantry at the expense of one of our boys:

“Messrs. Dudley of Ky., and Sessoms of Ga., are the last arrivals. The former made a stop-over, or rather, a hop­over, at Danville. Ky.; while the latter was detained on account of sickness. The B. & O Limited does not stop at Danville, but the attraction of his Alma Mater, or [perhaps a young lady] proved too strong for Mr. Dudley, so off he jumped from the train. After breaking down a telegraph pole and sailing through a half dozen wire fences he eventually landed on terra firma, “just a little shaken up” as he puts it. An outer application of arnica and an inner application of “Kentucky tea” put him on his feet again and, after a few days’ rest at the Institution, he pursued his journey.” (Dudley was the son of Dr. David Dudley, a former Kentucky Institution superintendent who had become the superintendent of the Colorado School. Dudley was traveling to college by train from Colorado.)

Here is another account from the New York Journal: “Recent arrivals Dudley, ’96, from Kentucky and Sessoms, ’96, from Georgia…An interesting story is told about Dudley’s trip northward. While nearing Danville, Ky., he inquired if his train would stop at Danville, but was informed that it would not. Being desirous to pay a visit to his alma mater (perhaps he had a sweetheart down there), he determined to jump off, and he did. The train at that time was going at the rate of forty miles an hour. After two or three fine somersaults, he landed on his feet, none the worse for his daring feat…”

Last Saturday the Printers and Shoemakers (older boys in the vocational programs) crossed bats at the new park which had just been made near Mrs. Lyle’s house (the south side of Jacobs Street). The Printers took first at bat, deciding to win the game with ease. The Shoemakers boasted all week, saying they would shut us out but our base hits were so numerous and two home runs by Brewsaugh, who made his on the errors by Whirlers Matthews and Young, and Jack Wright knocked the ball about a square out in right field and made a circuit of bases before the ball could be found. Pitcher Wallace showed up in great form and … allowed the Shoemakers only six safe hits. The score by inning was very close until the fourth inning, when the Printers found Meadows’ curves and knocked the ball all over the field for fifteen runs. The game ended in the sixth inning with the Printers winning, 25-7.

Robert Argo has a goat and every day may be seen tussling with this Ishmaelite harnessed to a cart. Robert would not exchange his goat and cart for a coach-and-four. A race track is being made in the park in front of the shop building. We are not sure as to whether it is to use in training Robert Argo’s goat, the Superintendent’s Texas pony, or for the use of the Supervisor and the boys who own bicycles.

Mary Ethridge suffered very badly with tooth-ache for several days last week, and in consequence her face looked like a full moon.

The Colored Institution buildings are being painted and penciled. The work is done by the boys. The carpenter shop has turned out some very handsome bedsteads, made of ash wood.

October 29— We have now 162 pupils in actual attendance. Of this number 104 were here last year, 3 are old pupils returned after an absence of one or more years, and 53 are new pupils. A few more are expected in a few days and when we get them all in, we will have close to 170.

The Centre College gymnasium has been completed, an instructor who is an expert athlete has arrived and taken charge and it is expected that the young men of Danville will hereafter take more interest in athletic sports than formerly. To see this beautiful and splendidly equipped building makes us feel just a little bit envious when we remember that several of the Institutions [for the deaf] are provided with such luxuries, but maybe our turn will come by and by.

Our football team opens the season with a game against the Centre College eleven, Saturday. Centre has been in training at Camp Daniel Boone, on the Kentucky River since the first of the month and will have a big advantage, but Coach Barron thinks our boys will show up pretty well. Our team will be light but fast. The boys have been practicing hard since school opened.

Post-game Report; Our football team opened the season in a game with the Centre College team, Saturday. Our line is light this year and was unable to hold their heavier opponents so the collegians won 27 to 0. Our boys put up a strong, gritty game and Centre had to work for every one of her touchdowns. One touchdown was made in each of the four periods, from which three goals were kicked. After a few minutes of play, Centre found the weak spot in the line and began to hammer it. The forward pass was also used effectively and helped to swell the score. Centre is much stronger this season than for several years past. 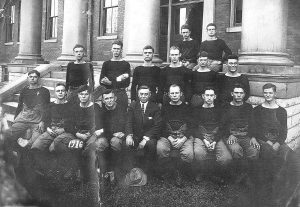 The Centre players were Giants and our boys “Runts.”

Our football team went to Somerset last Friday to trim the mountaineers, and came home trimmed. The boys appear to have been a match for ten at the Somerset players but there was one ubiquitous Scot who was too much for them; he could outrun a scared jack rabbit and was more elusive than a greased pig. He always had the ball and sprinted down the sidelines repeatedly for scores. When our boys, making a collective effort, thought they had him safely “nailed” they woke up to find him sitting on the ball behind their goal posts. The score was 42 to 6 in favor of Somerset.

A Week Later: The Somerset High School football team defeated our boys recently 42 to 6 which looked pretty bad, but the mountaineers played Frankfort High School the other day and rolled up a score of 103 points to nothing for their opponents. Our boys are feeling better since they heard the news.

Our football team met their old rivals, Stanford, last Friday, and what they did to them was a plenty. They took a soul-satisfying revenge for many a past defeat, rolling up 56 points against them while the visitors made only 7 points against our boys. The game was played on our grounds and was witnessed by nearly all our household who rooted lustily for K.S.D. Cecil Brown was the star of the game. He made a 40 yard dash through the line of the Stanford team.

Our football boys are practicing hard this week on the signals and trick plays. Our team is light but fast. The players average 144 pounds in weight.

For Sale: Cecil Brown wants to sell his law books. He says he hopes the purchaser will study them better than he. Ask him how much the price is.

Every afternoon the broom brigade composed of little boys, is out in the front yard sweeping up the leaves which are later gathered up and carted away. Mr. Barron is not too proud to handle a broom with them, and the youngsters work their heads off trying to show him what they can do.

The pupils have been much interested in politics lately and many of the little ones who had never thought to ask before have written home to find out how father and mother line up politically. One little girl who wrote home received a reply saying, “Father and mother, all the children, the horse, cow, dog, cat, and everything else on the place is Republican.”