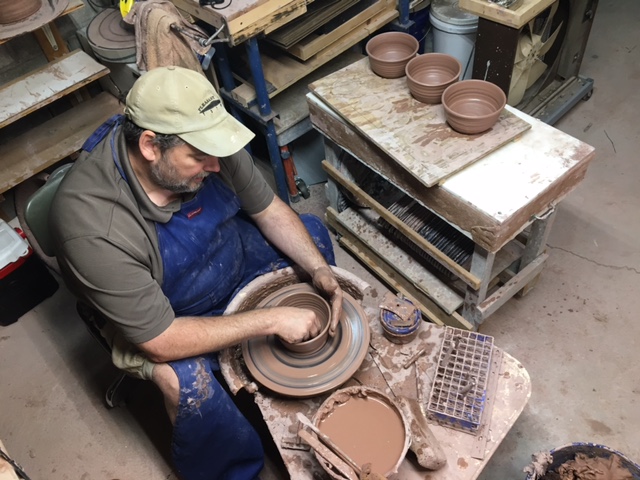 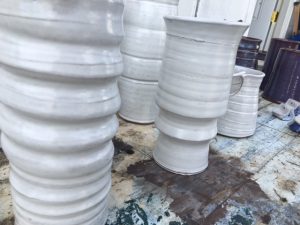 His first time participating in the ARTTOUR Open Studios event, Paul Muth will be opening his home pottery studio to the public — also for the first time.

Just down Logan Avenue, Muth is readying his studio located behind his home. There are blue and white finished pieces situated on a table, pieces ready to be painted lined up on shelves and those still drying carefully placed in a humidity-controlled area. A table full of soft clay cut in blocks sits beside his wheel. 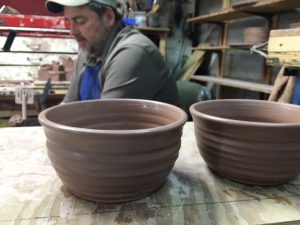 Muth became interested in pottery as a studio art major at Centre College. He grew up on a Centennial Farm — he’s the eighth generation, with his family owning it since the 1850s — raising cattle in the very corner of Warren, Butler and Logan counties. The name Sugar Grove Pottery & Eclectica as a shout out to his roots; Sugar Grove Road goes through his family’s farm.

Honeypots, soup mugs, cereal bowls, watercan pitchers, plates and flower vases line the walls of his studio.  Some are white, some are blue, some are “tobacco spit brown” as he calls them. “This is Albany,”  explaining the Albany  slip clay came from a mine in New York which was closed after a subdivision was built over it. 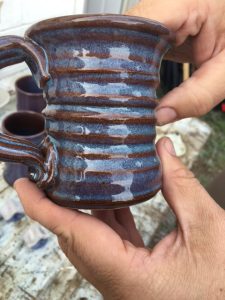 Muth was juried into the Kentucky Craft Marketing program in 1993. “They’ve been very good to me.” Sometimes the hardest part of making art is the business aspect of selling it, he says.  “But they work hard to mentor adult artists and are excellent at it.”

Artist John Dixon, this year’s ARTTOUR organizer, approached Muth about participating —  he said why not. Muth’s job was recently eliminated with Ephraim McDowell Health — he was children’s projects coordinator — so, he thought, I have the time, let’s give this thing a go. 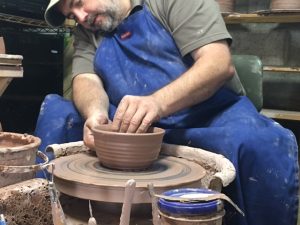 “I’ve done a lot of gallery hops … I helped organize the  original one here years ago,” he says, but this will be different. “Seeing an artist’s home workspace environment, it’s just interesting.” If he had to pick his favorite part of creating pottery pieces, 1000 percent, he says, it’s the throwing. As for glazes and designs, he’s prone to cleaner aesthetics.

“I like the simple glazes, colors that highlight the shapes of the pieces, their simplicity. The glazes are beautiful and can intensify the shapes of pieces, but there’s a puzzle to it. The chemistry part — it’s horrifying, he says. 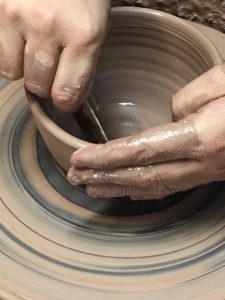 “I set up the parameters of the glaze, but every firing is different. You put it in there, and it happens as it happens. It does what it wants to do. But I want all of my work to be almost finished when it comes off the wheel. I like the way they look off of the wheel,” he says, placing the deep cereal bowls he just masterfully churned out on the work table beside of him.  Muth makes it look really easy.

Some of his newer pieces are ones he seems to be most drawn toward — a white finish. “I just think they’re more classic, simple but elegant.” He also uses different variations of blue, some with crystals which gather in the indentions of his pieces, giving them almost an iridescent hue.

“This blue surprised me. I’ve been working through the glaze chemistry, it can be difficult. The crystals gather in the cracks and ridges, I call it ‘floating blue.’” 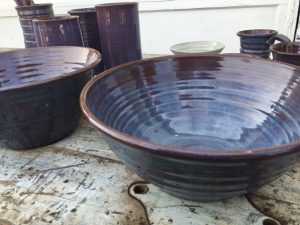 A running joke with Muth and friends is his love of wheels. Everything in his studio sits atop them — shelves, huge work tables, even his “two baby kilns,” all on wheels.

“They’re little baby ones, but they’re good for that I need them for.” So far, he’s not had any crazy, out-of-the-norm orders. He’s made some pet bowls, has the makings to get into beadwork later if he decides to …

“Nervous, about people coming here for the ARTTOUR? No, not really. I’m kind of extroverted. I like the format of opening occasionally to have people see my workspace.”

Muth plans an additional open house event at Sugar Grove before Christmas, and will be a part of future Farmers Markets and the Gallery Hop event in November.