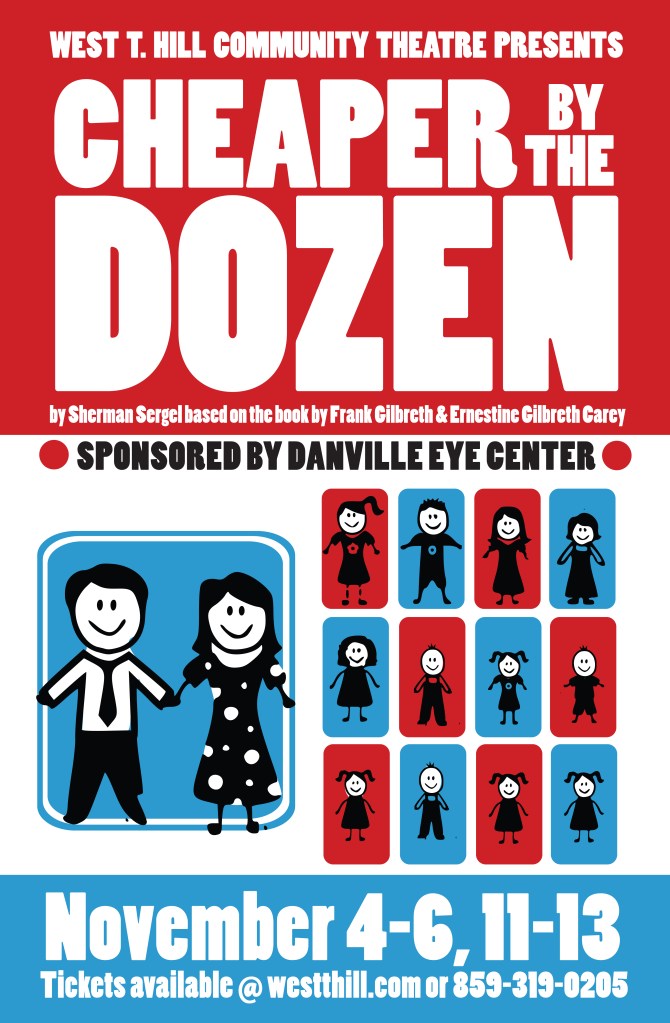 Karen Logue says this is NOT the Steve Martin movie.

“Cheaper by the Dozen” will go up Friday at West T. Hill Community Theatre, and the managing director says it sticks to the adaptation by Christopher Sergel, from the book written by Frank and Ernestine Gilbert.

“It’s a heart-warming classic brought alive on our stage,” Logue says. The story is about a 1920s dad who attempts to run his home and family, with 12 children, a lovely wife and a mangy dog by applying his theories of industrial efficiency. His award-winning theories aren’t so popular with his teenage daughters, who are trying their hardest to grow up like all of their other friends, Logue says.

She says the stage play may be “old fashioned,” but it has timely issues — issues that transcend the decades.

“It’s squeaky clean and delightful.  There is humor, pathos and lots of noise and confusion, not much different than households today,” Logue says. “Instead of computers and video games, these kids are trying to learn to dance to the new jazz music coming from their Victrolas.  Learning French and German is a priority along with getting the best grades in school.”

“We have our youngest cast member ever in this show — Jona Voss is just 4 years old and this is stage debut,” Logue says. She says it may be a challenge to keep him focused, but he is a joy to watch. “And he learned his lines before anyone else! It will be fun to see how he respond to a live audience.”

Logue says the piece is humorous and entertaining, and she hopes some folks who have read the book — especially younger people — come to see it.

“Seeing a stage play like this based on a book should encourage them to explore literature and realize the comparisons from generation to generation. It will be fun for them to see that ‘growing up’ is never really all that different.”

Bringing the show alive, like all others, requires considerable help. “We’ve had excellent help, which is the fuel for community theater productions. I’m blessed to have Alice Berka as my right hand one again, helping me with stage management, direction and costumes,” Logue says.

Jan Sheffield is associate director, and Logue says the “beautiful and functional Victorian set” is designed and constructed by Jeff Cooper.