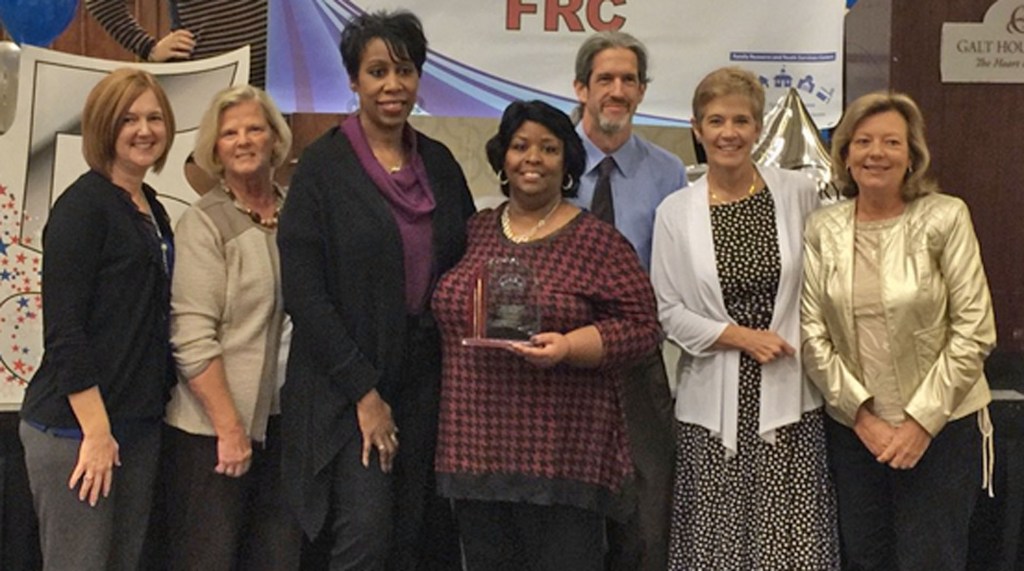 The staff of the Families First Family Resource and Youth Service Center in the Danville Schools recently earned an award for teaching parents how to better care for their children.

“I was very shocked and surprised — but excited. We have so many resource centers across the state, so I just never dreamed … I was shocked — good shocked,” Houston said.

The nurturing parent classes are taught two to three times a year by Houston, who has now been joined by Alethea Price, agent at the Boyle County Extension Office, to teach the 13-week classes.

Houston gets a grant through Prevent Child Abuse KY to provide the classes. A lot of the families, she said, have lost custody of their children and have been ordered to take a parenting class. In the past five or six years, they’ve had 50-60 families come through the classes. About 75 percent are reunited with their children, she said.

The weekly program includes a meal for the families. Parents are encouraged to bring their children to the event. Facilitators work with the adults in one room and other staff members work with the children.

For example, Houston said, “if it’s on group or family rules, I teach the adults and the children learn from other staff.” For the last 20 minutes, those parents who bring their children will be reunited with them to work on the what they learned together.

In 2010, they reworked how they operate the program, Houston said.

“To me, this means we’re doing it right. We’re doing exactly what we need to be doing to serve families and children and hopefully providing strategies that will decrease child abuse and child maltreatment in our homes. It’s definitely a big issue,” she said. “Kentucky is one of the highest states for child abuse.”

Houston was officially recognized last week at a conference for the state’s more than 800 family resource centers, but said she had found out earlier when district and school officials made the announcement before students at the morning assembly.

“Dr. Look was there and he was talking to the kids. He was like, ‘Yes it’s picture day. When you get up there to take your picture, instead of saying ‘Cheese,’ say, ‘Mrs. Houston,’’ and I thought, ‘Oh boy, what have I done now?’”

Then he made the announcement.

Houston said it was definitely an award for the whole team, not just her.

There are three liaisons at each of the elementary schools: Janie Sanders, Rachel Hicks and Mary Wells. Without their dedication, Houston said, the center would not be what it is.

The Families First Center was nominated by various members of the district, Houston said.

“It was very exciting to hear what other people had to say,” she said.

If it weren’t for support districtwide, this award wouldn’t have happened either, she said.

“The beauty of the job in this district is that there’s so much support. Dr. Look is very supportive of what we do. Having the support from the central office, principals and teachers — it makes a difference. Everybody supports what we’re doing.”

Family resource centers were launched as part of the 1991 Kentucky Education Reform Act and are the only part of that legislation that remain, Houston said.

“A lot of folks have told me over the years that many believed the (family resource and youth service centers) would be the first thing to go and that it would not last. It’s the last thing left from that era,” she said. “Hopefully, despite the budget cuts we take every single year, we’ll still be around.”

It’s definitely not an easy job, Houston said, and some days the work doesn’t end when they leave the center.

“Our families and our children need us. Our purpose for being here is to remove barriers that interfere with a child’s successful education. that doesn’t stop. We need to always have these family resource and youth service centers to decrease some of these barriers for our children and our families,” she said. “By barriers, I mean things such as food, clothing, helping with a utility bill, connecting them with resources such as food stamps, or domestic violence (support), housing. It just goes on and on. Those issues aren’t going away anytime soon so knowing that there’s somebody in the schools that can help these folks — it’s a passion of mine.”

Houston said the job is something she is passionate about whether or not she’s at work.

“If you’re very passionate about the job, you don’t just lock the door and go home at night and not be concerned about these children,” she said. “You go home and you toss and turn because you’re wondering if that child got that food, if the electricity got turned on, and, are those children warm. You worry about those kinds of things with these children. I call them my babies, I want to see them the next morning to know that they were okay last night.”