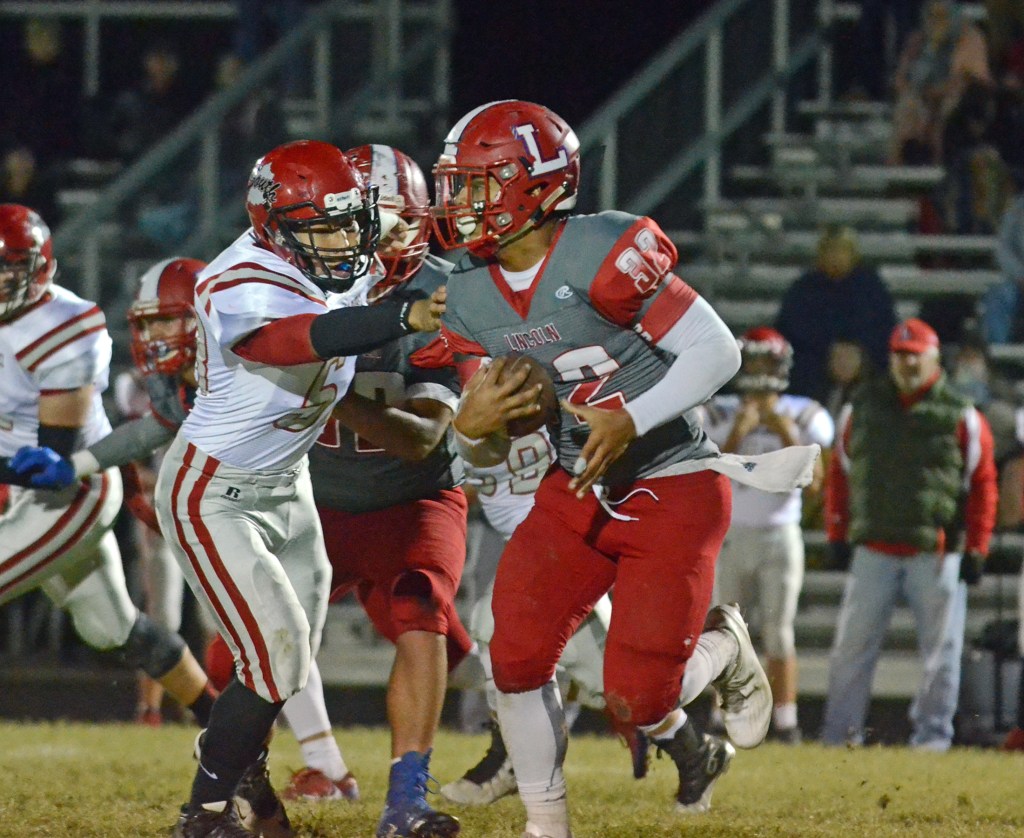 Nancy Leedy/nancy@theinteriorjournal.com Tra Carey of Lincoln County went over 1,000 yards for the season with 142 yards and two touchdowns on 34 carries Friday night against South Laurel, but it wouldn't be enough to push the Patriots past the Cardinals, who took the district game 42-35.

Just based upon record, seeding and district finish, Thursday’s first round of the Class 5A football playoffs should be a difficult task for Lincoln County. The Patriots, who enter with a 1-9 record, travel to 8-2 Whitley County.

But as the Pats found out last year, they don’t play games in standings or on paper. They traveled to Harlan County last year as underdogs and came away with the win.

Coach Travis Leffew is looking forward to a similar performance this year.

“Our players understand the difficult schedule we play each year to prepare us for the playoffs,” Leffew said. “Last year’s regular season competition allowed us to be ready for the playoffs and gave us a win on the road against a good Harlan County team.”

Granted, Lincoln went 0-5 in those games and was outscored 214-98, but there is something to be said for getting better by playing better teams. Overall, though, the Pats lost five of their games by seven points or fewer.

“Our player’s have been focused and energetic each week of the season thus far, they do a great job of learning from the prior week’s game and moving on to the next week,” Leffew said. “Our practice thus far have been up tempo with high energy and focus. Our players understand that we are entering the third part of the season (playoffs) and all teams in our eyes are 0-0.”

The Colonels pile up nearly 336 yards per game while scoring 33.1 points on average. Quarterback Dylan WIlson has completed 110-of-181 passes (60.8 percent) for 1,609 yards and 23 touchdowns against six interceptions. Dawson Swain and Cameron Rose have combined to catch 57 passes for 951 yards and a dozen TDs.

“We have to focus on what we do offensively and defensively,” Leffew said. “We have been our biggest enemy this season with turnovers and giving up big plays.”

When they’ve gotten out of their own way, the Pats have moved the ball on the ground behind running back Tra Carey and quarterback Tanner McAninch. Carey has 1,105 yards and 11 scores while McAninch has 839 and 10.

McAninch is one of four players to attempt a pass this year, throwing for 738 yards and seven scores. However, Leffew said it’s no secret what the Pats want to do.

“We are a clock control team as everyone in the state knows, our focus is moving the ball down the field while using the clock up,” he said. “Turnovers have killed us all season long, so we have to make sure we secure the ball at all times and run down hill.”

The game was moved to 7:30 p.m. Thursday to accommodate Whitley’s appearance in the volleyball state tournament. While it’s the first time all season Lincoln won’t play on a Friday, Leffew doesn’t see it being much of an issue.

“I don’t feel that playing on a Thursday will affect our preparation,” he said. “We have been able to practice the same amount of days by coming in this past weekend. This time of the year your players know/understand what their assignments are and look forward to game day.”

And not only will the date be different, but so will the drive. The furthest Lincoln has traveled this year has been a 45-minute drive to Pulaski County; Thursday’s game will be double the time.

But as Leffew pointed out, the 90-minute trip to Whitley pales in comparison to the two-plus hours it took to travel to last year’s playoff game in Harlan. And we know how that one turned out.

“We have some different things planned for the trip down to Whitley County,” Leffew said. “Our guys will be focused on the task in front of us, I don’t think the hour-and-half ride will affect our players.”