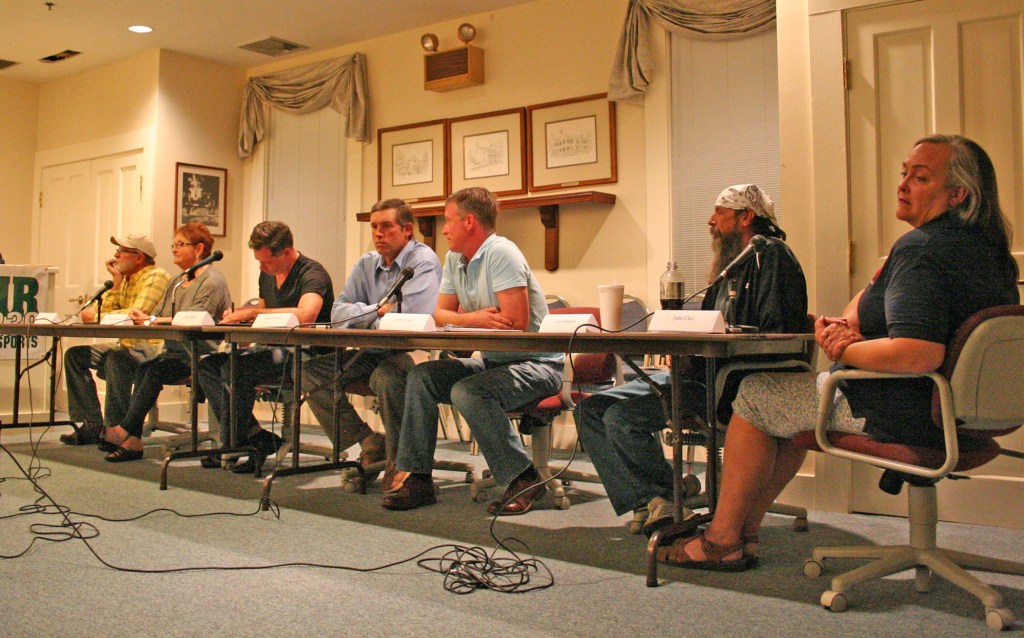 Seven of the eight candidates for Perryville City Council attended a public forum Tuesday night, sharing with community members their ideas for the city’s future growth.

Moderator John Nelson asked candidates eight questions, ranging from the Danville-Boyle County Economic Development Partnership and the city’s relationship with it to police protection to the city’s historic properties.

The city’s recent alcohol vote was a big topic. Nelson questioned the candidates about what tax rate would be appropriate for alcohol sales.

Houck was up first and said the city was expecting to be able to place a percentage tax on alcohol sales, but learned recently that this wouldn’t currently be allowed.

“We are not considered a certified city, so really all we have access to at this point is just the fees on the licensing,” he said. “… I do think it needs to be a conversation with our state government, because I think that was an oversight on their part.”

“Do I think that we need to charge the absolute eight percent?” Houck asked, referring to the maximum percentage tax that a city can apply to alcohol sales. “No, because I do think we need to be somewhat competitive with the communities that are around us, but right now it’s not something that’s on our plate.”

The other candidates agreed the rate needed to be lower than the maximum. For Simpson, that translated to six percent, while Clay said five percent and Bailey, Reynolds and Caldwell didn’t name a percentage. Webb said the competitiveness also depended on next year’s budget, because the tax dollars could play a major role in the budget.

Nelson asked the candidates what they thought “could be done to improve the level of tourism and attract more businesses to Perryville.”

The number one thing, Clay said, would be to get a restaurant — which is already in the works — “so that we can serve some of the international clientele that we already have.”

“I’m walking the dog this summer this morning and run into a guy from Switzerland just cruising the streets. I gave him a nickel tour of Merchant’s Row and sent him on his way. I’ve met people from Japan and Australia who have come here,” Clay said. “We might be not on a major highway, but we’re a major tourist attraction and they always want to know, ‘Where do we go to eat? How can we spend our money in Perryville?’ Doing more tourist-related businesses would be ideal and having a restaurant would be number one on that list, I think.”

That sentiment was echoed by Bailey, who also said it would be nice to have more places for people to stay.

“Perryville’s got a lot to offer that’s hard to see in one day. If you really wanted to tour it and look at all the historic value in it, you really need to spend more time. With the bed and breakfasts and the restaurants, it would give people more opportunity,” he said.

Not only would a restaurant benefit tourists, it would benefit locals, Reynolds said, adding that so few of the locals ever act like tourists, taking in the local sites.

Webb said that he counted at least six structures owned by the city that were vacant and could be renovated and turned into retail spots.

“That also entails Perryville deciding its story, what kind of story it wants to tell, what kind of merchants it would like to have. I think the other thing that would help tourism is that we need to work on our street scape,” Webb said, describing the Merchant’s Row area as being in “disarray.”

“I think we need to do more to it to get people to come,” he said.

Caldwell said that Danville’s tourism has increased greatly since that city enacted alcohol sales and he thinks there could be a similar impact in Perryville. He also mentioned street-scaping.

“Something needs to be done on Merchant’s Row … We have to have the community’s involvement in calling their representatives and ruffling the right feathers or we’re on the back burner,” he said.

Houck, who runs two restaurants and has said he plans to open a third one in Perryville, serves on the Danville-Boyle County Convention and Visitor’s Bureau board.

The last question of the night asked candidates to consider what they thought the biggest issue facing the city was.

Bailey, who started off the answers, said he felt that drugs was a big issue.

“I think, as a community, we need to work with local churches to try to provide some type of alternative for the kids, something for the kids to do,” he said.

Reynolds said she thought there were a few things, but the safety of citizens was number one. Addressing that means ensuring first responders have everything they need to care for those in need, she said. As a nurse, Reynolds said it was important to get them the equipment and support they needed to get people help quickly.

The budget is the biggest issue, according Webb, who said generating income will enable the city to combat the drug problems and get equipment needed for first responders, among other things. He said that having the money would also help the city fix the properties it owns, bringing more revenue from tourism.

Caldwell said that community involvement is a big issue for the city.

He said the “biggest issues we have could all be solved by what I’ve harped on all night: community involvement. If everybody works together, we can do just about anything.”

Houck agreed with that, but said he thought communication was the biggest issue facing Perryville, from city hall all through town. He questioned if the city should have a website or be involved on social media.

“It’s a lack of communication between the clerk and the city, the city and those of us who live here — there are things that go on and we don’t always have easy access to the information we need to make good decisions … We don’t communicate well with the tourists that come into our town,” Houck said.

For Tim Simpson, doing more work on a historical ordinance is a big issue for the city. He also echoed Caldwell and Houck’s concerns about community involvement and communication.

Clay said the budget was one of the big priorities.

Candidates also answered questions about the restoration of historical properties; the relationship between the city and Main Street Perryville, which has been tense at times; the relationship between the city and the economic development partnership; and what would happen if the battlefield were to become a national park. The complete forum, along with the other two candidate forums hosted by the Danville-Boyle County Chamber of Commerce, can be heard on www.hometownlive.net, under podcasts/replays.