Casey faces first-week rematch in round one of playoffs 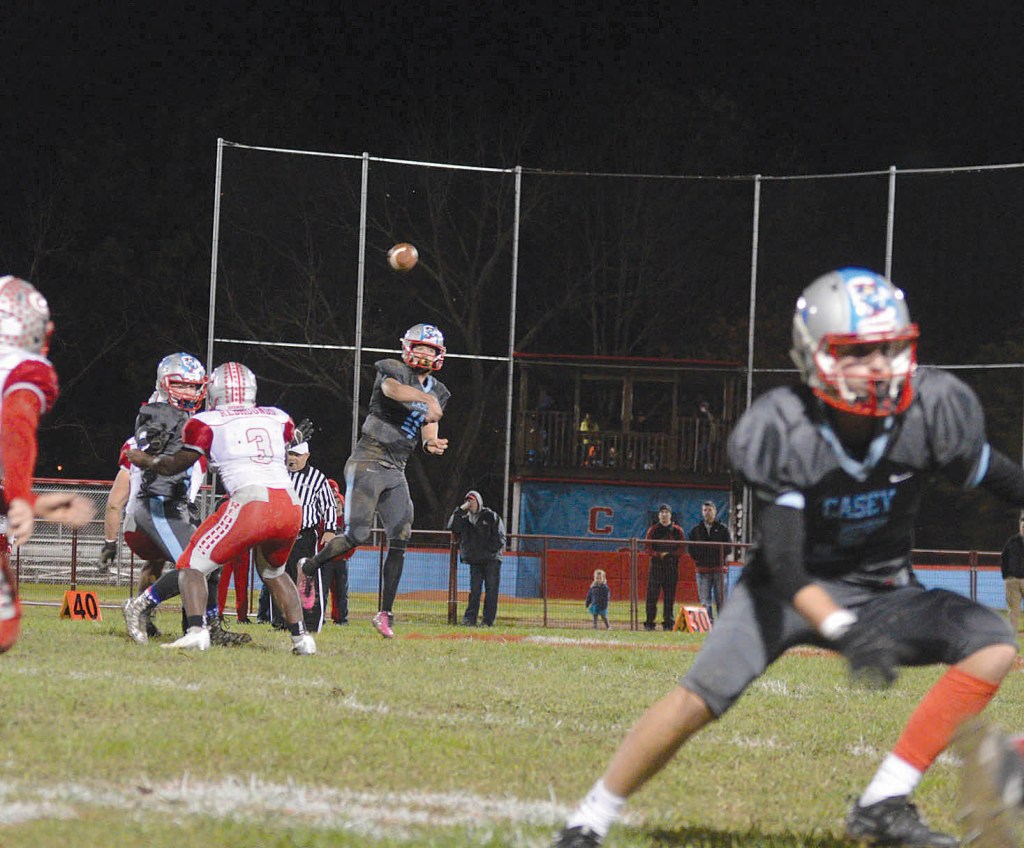 Jeremy Schneider/jeremy.schneider@amnews.com Casey County quarterback Breece Hayes has thrown for over 2,000 yards this season, the first player in Casey history to pass that milestone.

Powell County was the first team this season to face a rejuvenated Casey County squad under coach Steve Stonebraker.

The Rebels cleaned up, winning 37-0 on the road to kickstart the best start to a season in program history.

But that shutout win means nothing to Stonebraker and his team now.

“I tell my guys all the time the scoreboard will start at zero to zero,” Stonebraker said. “We have to go earn this victory just like we did all the others. We don’t get any points at the start of this game just because we beat them back in August.”

Since that game, Casey has enjoyed one of the best seasons in school history, and a win on Friday would be the first nine-win season ever for the Rebels.

Stonebraker said both sides of the ball have improved from that game in August.

“We have improved a great deal since that first game,” he said. “Our competitive energy and effort has improved since then. At the same time, we were a terrible perimeter blocking team on offense. We aren’t where we need to be, but we are much better now.

“The main thing that has improved since the first of the season is our defense. We are doing a much better job in keeping our gap integrity and in taking proper pursuit angles to the ball. Our down guys are much more effective against double teams and combo blocks. We still need to improve finishing better with our tackling, but I have loved the physicality of our defense against the run since our Bell County game.”

Bell County was another turning point for Casey: It was the sixth win of the season, and its first win over Bell.

The team has responded after every win in a positive way, and that positivity has continued through a loss two weeks ago against Corbin.

“Our guys have been excited all season long and have had good attitudes in practices,” Stonebraker said. “Our team camaraderie has developed and a lot of that comes easier with success. The thing we have to be focused on right now is the team in front of us. We can’t be overly concerned with what may be down the road because in the playoffs, if you slip up, then the road has come to an end for you.”

The game plan doesn’t change for the Rebels this week: They’ll have to execute to advance.

“The bottom line is we have to focus to execute,” Stonebraker said. “High school football comes down to blocking, ball security, pursuit, tackling and your specialists not making individual mistakes that can lead to an opponent’s score. Those are the key five areas every Friday night and it won’t be any different this week.”

Having the game at home is an added bonus, and Stonebraker said his team needs that community support again on Friday.

“We certainly hope our crowd will be strong this week and our fans will be there for our players.  They have worked very hard to get to this point and we have had great support from the community all year.  We just want the opportunity to keep this thing going as long as we can.”