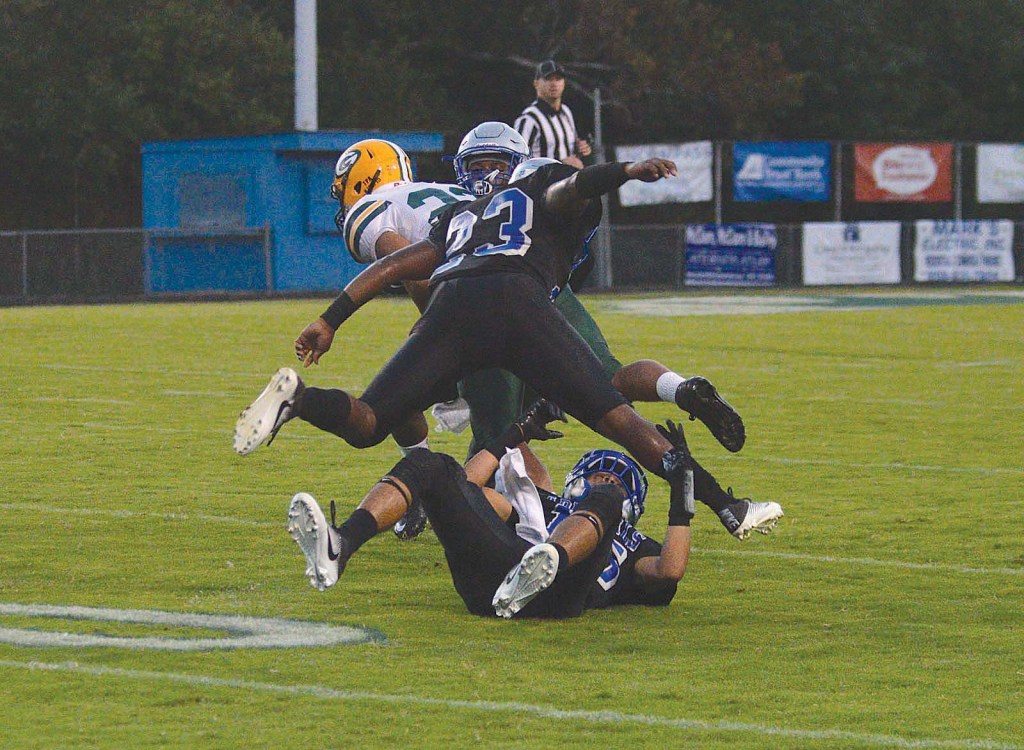 When an offense is among the state leaders in points per game and passing yards, it’s easy for the defense to get forgotten. But the Danville football team has earned notice on both sides of the ball.

The Admirals (8-2) enter the postseason having given up less than 1,000 rushing yards all season — 976 yards to be exact. They’re also second in the area with 129.3 passing yards per game and lead the area in scoring defense (15.9 points per game).

But even with all those gaudy defensive numbers, Ads coach Clay Clevenger isn’t satisfied with his defense just yet. That should be a scary notion for Danville’s playoff opponent this week, Allen Central, and the other teams in the Class 3A postseason.

To his point, in their two losses, the Ads have allowed Lexington Christian and Corbin to rush for 417 yards.

After a win over Somerset this season, during which the defense allowed 75 rushing yards and 146 total, quarterback Zach Dampier said the offense gets energy from great defensive plays. For Clevenger, that’s exactly how it should be.

“As a coach, especially the head coach, you always want your guys dialed in defensively,” he said. “There’s the old adage, if teams can’t score, they can’t win. Offense can  come and go throughout the course of a season, throughout a game, but defense is more about effort, about want-to. If you have guys playing with both of those things, it will carry over.

“There have been times this year where our offense has stalled a little bit and it’s affected our defense. I’d really rather that be the opposite, having our offense feed off our defense.”

After the Ads graduated loads of talent from last year’s record-setting unit, there were some questions who would fill in the holes. They’ve found their replacements more than capable of upholding the tradition.

Another area of concern was the running game; Danville had to replace a 1,000-yard rusher and its entire offensive line. While there’s no doubt the Ads will go as far as Dampier and the talented receiving corp can take them, running back Donlevy Harris has been a pleasant surprise, rushing for 983 yards and 15 touchdowns. His yards rank third in the area and his rushing TDs are second.

With the calendar flipping into November, the threat of bad weather increases by the week, putting more emphasis on defense and a running attack.

“We really haven’t had it this year, but in playoff football, the further you go, the worse the conditions can become. Playing solid defense and running the football becomes that much more important,” Clevenger said. “Those are the things I feel we’ve gotten better at as the season has gone along.”

Allen Central comes into Friday’s matchup with an 8-2 record, outscoring opponents 37-18 on average. The Rebels have more than three times as many rushing yards as passing out of their pistol option offense. Quarterback Dylan Caudill leads the team with 687 yards and 11 TDs, with fullback Cameron Evans adding 651 yards and six scores. Halfback Jesse Brown and tailback Steven Howard each have six rushing TDs as well.

Caudill has thrown for 618 yards and nine TDs while completing 47-of-67 attempts. Brown has hauled in 18 of those tosses for 339 yards and five scores.

“We’ve got to make sure we’re on our toes, playing fast.” Clevenger said.

Howard leads the squad with 74 tackles from his linebacker spot, and defensive end Josh King adds 66.

“They’re not going to do anything we haven’t seen. The biggest thing is us being able to spread out the ball and throw the football around is something they probably haven’t seen much,” Clevenger said.

The Rebels will have nearly a three-hour trek from eastern Kentucky to Admiral Stadium.While Clevenger said he wants to take advantage of whatever that may present, he’s not making too big of a deal out of it.

“I don’t want to talk about it being too much of an advantage because if we win, next week we’re on the road,” he said. “It is what it is on that. It’s going to be a little longer bus ride for them, and obviously we want to use that to our advantage. Those are things you can’t control. We can control how we come out and play.”