Donald King Norvell, 84, passed away Tuesday, Nov. 1, 2016. He was born in Perryville, Kentucky, Oct. 23, 1932, to the late Alford “Alfie” and Mary Providence Webb Norvell and was the husband of 64 years to Betty Lee Rogers Norvell.

Donald was employed at Jack Kain Ford for 34 years where he served as Parts Manager. He was an avid outdoorsman and clay target shooting enthusiast. He was a member of the Casey County Sportsman Club for 20 years. He loved UK Basketball and dogs. 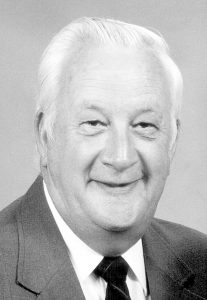 He was predeceased by brothers Warren Lee, William Winder and Kenneth Prewitt Norvell.

The funeral service will be 1 p.m. Friday, Nov. 4, 2016, at Perryville Christian Church with Rev. Joe Hood and Tommy Weddle officiating. Burial will follow in Hillcrest Cemetery. Visitation will be from 11 a.m. to 1 p.m. prior to the service at the church. Wilder Funeral Home Perryville is entrusted with the arrangements.