Drilling for the worst Hospital staff, responders practice what to do in ‘active shooter’ situation 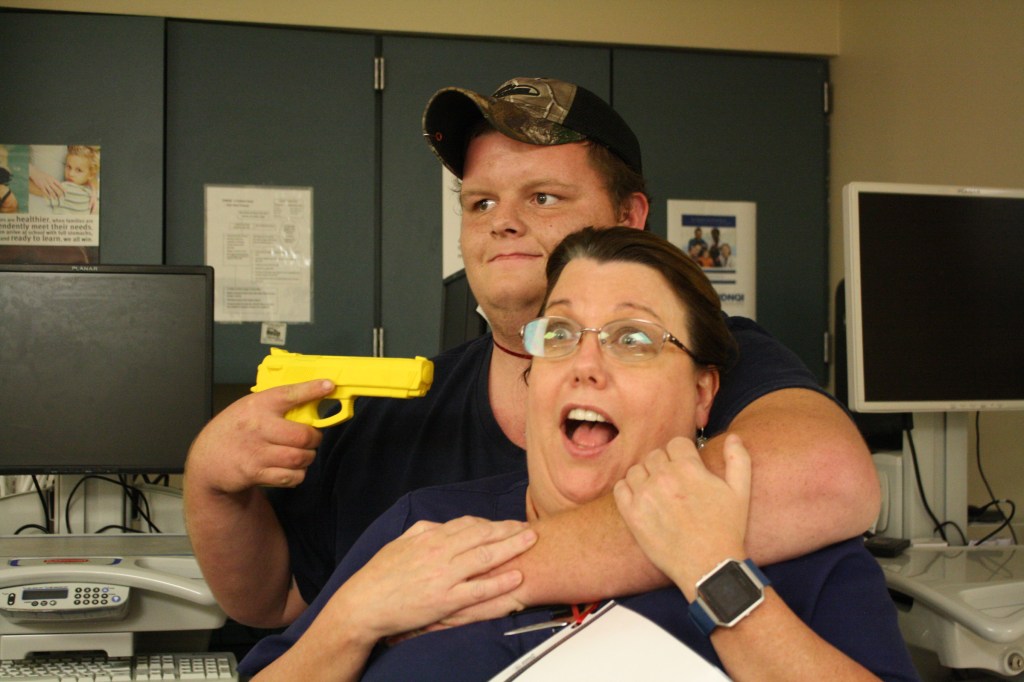 The drill took place at 7 p.m. The scenario was that an active shooter entered the transitional care unit on the fourth floor, shooting 20 people and holding a nurse hostage.

After the shooter shot the victims, law enforcement officers with the Boyle County Sheriff’s Office entered the floor and eliminated the shooter. Officers then walked around the floor and checked for survivors and other possible shooters.

Once the area was searched, there was an “all clear” announcement made, which then put the hospital in “Code D.” This allowed responders to take the shooting victims to the emergency room where they received the proper treatment.

During the drill, 11 security guards from Boyle County Explorers were stationed at five of the hospital entrances to keep people from coming in and out. Boyle County EMS was present to assist with the victims.

Three staff nurses and 17 EMT students from Boyle County EMS played the victims, who wore signs describing their injuries, which helped the nurses know how to treat them once they were taken to the emergency room.

“With everything going on in the world — there have been active shootings in hospitals … we want to be prepared for anything and everything that comes through the door,” Clarkson said. “We have patients to care for, but we have to care for ourselves, too.”

Boyle County Emergency Management Director Mike Wilder said there is a real possibility that an active shooter situation could occur in the hospital.

Besides the hospital wanting to prepare themselves for a possible situation, they are required to have two different drills every year, and one of them this year is the active shooter drill.

Clarkson said the drill tests the facility and security to see if they are prepared if this were to happen.

She said she has been planning the drill for months and came up with an active shooter policy. Once the policy was set, the security guards went around to every floor and spoke with everyone about the policy, she said.

Everyone at the hospital has been educated and was aware of what was going to be happening during the drill, Clarkson said. During the drill, the main goals were making sure all the appropriate processes are in place and that the staff know what they should be doing, she said.

Clarkson and Wilder both said it was stressed several times to the patients and staff that this was only a drill to help keep everyone calm and prevent panic.

The test did not just prepare and test hospital and the staff; it also tested the abilities of first responders, Wilder said.

Voters have plenty of options for Burgin City Council