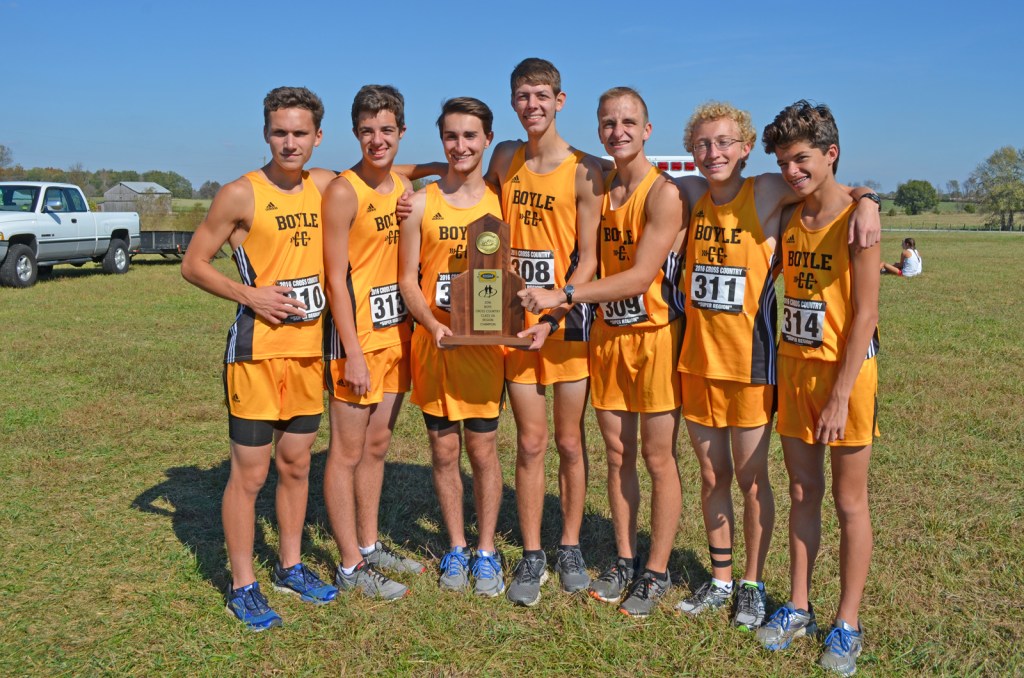 Boyle County boys won the region cross country meet last weekend at Wayne County and will look to make their mark at state on Saturday.

“The guys team was very focused at Regions as we thought it would be close,” coach Donna Anderson said. “We knew we had a shot at winning so therefore all the guys were invested and excited. The team is confident in their ability to collectively put together a solid race and I’m expecting some personal best times with cooler temperatures. We try not to be too serious this week so the pressure and anxiety is kept to a minimum.”

The Rebels had four runners finish in the top 10 at region, with Malik Allahham leading the way. He finished second with a 17:33 time. Those times have Boyle ranked No. 6 in 2A entering the state meet.

But Anderson said the work for her team isn’t done. She wants them to prepare to improve on last season’s state performance, where times were at a record low for Boyle County cross country.

“I have tried to steer the team to looking past regions to doing well at the state level. That requires getting psyched and refocused to push yourself again,” she said. “Last year at state we had the fastest team average time in the history of Boyle County cross country. They took pride in that accomplishment and it shows how much the sport is growing and getting faster. It was exciting to see so much yellow up there in the top 10 at regions.”

And the Rebels are peaking at the right time, Anderson said.

“Will LaFavers has dropped nearly a minute from last year and first year Jackson Cox has been dropping time getting solidly under 18 minutes which has been huge for us,” she said. “He had a successful track season qualifying for state in the mile, and he has transitioned to the 5K distance well. Jack and Seth Stomberger and Trey Gilliland are all first time cross-country runners for Boyle and it has been exciting to see them keep improving throughout the season as they learn how to race and deal with the pain of racing a 5K. Taylor Whitsell made his move at Regions with a season PR his Senior year which came at the perfect time.”

The girls team is ranked ninth in 2A and qualified for state after placing third at the region meet. Ally Anderson placed third overall at region, which was two spots lower than she expected to finish. But she’s still eyeing a top 10 finish at state, coach Anderson said.

“Ally’s freshman season last year was fantastic. So it does take a mental adjustment to keep things in perspective and know that hard work and consistent training in the long run do pay off,” coach Anderson said. “Running does build over the years. She is still growing and is fairly close to her best time from last year. She has seen other girls have difficult races and understands that that can happen on any given day. So you can’t dwell on it for too long.

“As the field of runners change, with girls graduating and new girls coming in, a top 10 finish at state is great on any given year.  I am certainly proud of how hard Ally has worked over the summer and fall and it has been a fun year to be part of the entire Boyle cross-country team.”

Anderson said the girls team, while extremely young, has given her all the effort she could ask for this season. She’ll ask for one more great race on Saturday.

“I did have high expectations for the girls this year knowing the new talent we were getting with Emma Jackson, Naia Hutchins, and Addison Hensley and we didn’t have anyone graduate,” coach Anderson said. “I knew we would be young but knew they had some talent. I’m very pleased with the team’s work effort, commitment, and times they have been able to run this year.”

Casey County also had both teams qualify for state in class 2A, and Mercer County girls qualified at the region meet. Burgin boys qualified in 1A, and Danville’s Claire Strysick qualified as an individual. The state meets start Saturday morning at the Kentucky Horse Park.