Defense lifts Titans into second round 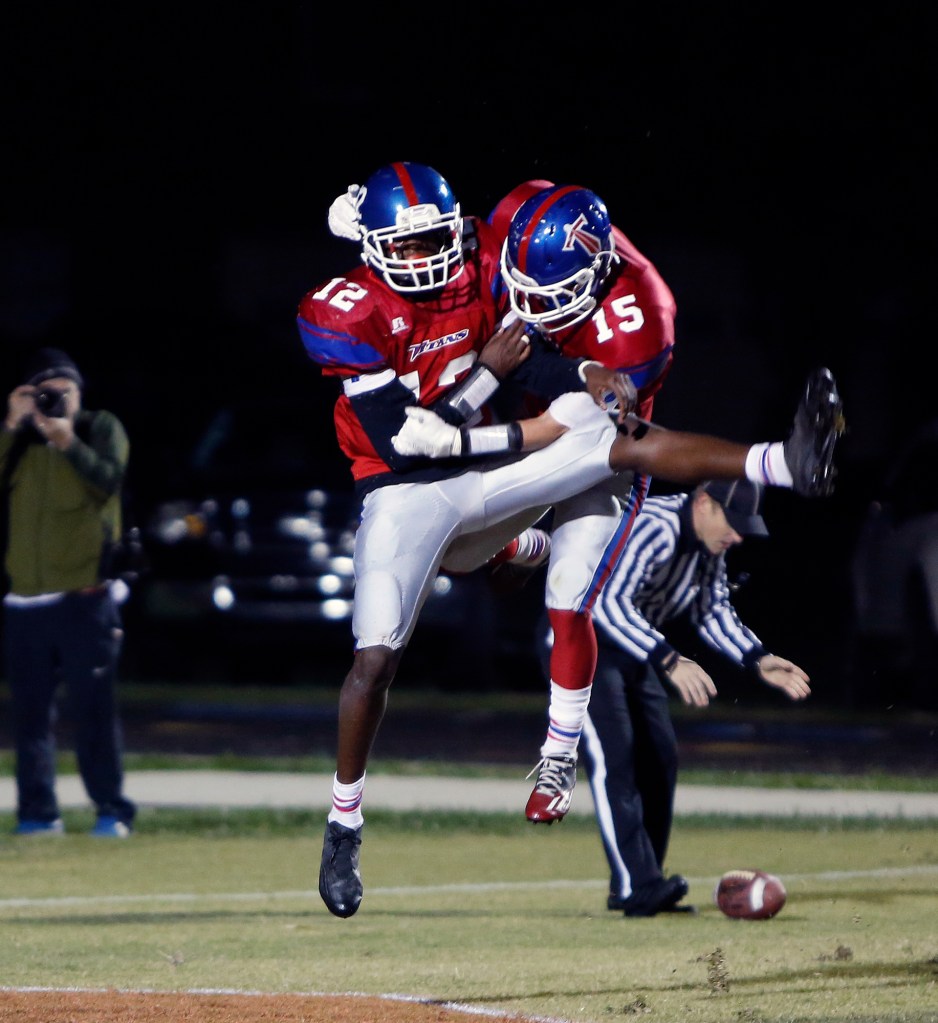 Mike Marsee/For The Advocate-Messenger Mercer County safety Trevon Faulkner, top, collides with teammate Robby McClain after Faulkner intercepted a pass during the first quarter. It was the first of three interceptions for Faulkner.

HARRODSBURG — Trevon Faulkner caught twice as many passes as he was supposed to Friday night.

The Mercer County junior, who has been playing for just over half a season, made some of the biggest plays in the Titans’ 21-3 victory over Knox Central in the first round of the Class 4A playoffs.

He hauled in three passes thrown by Mercer’s quarterback and three from Knox’s quarterbacks to help the Titans eliminate the team that eliminated them from the postseason a year ago.

“I’m just trying to come out here and make plays for my team,” he said. “I’m trying to get that state championship; that’s why I came out here to play.”

Faulkner, a star player on the Mercer boys basketball team, joined the football Titans five games into this season and has become one of the top playmakers for a team that will take a four-game winning streak into its second-round game at No. 4 Rockcastle County this Friday.

He caught two of Gunnar Gillis’ three touchdown passes and had three interceptions in Mercer territory to help the Titans (7-4) nearly post their second straight shutout.

The Mercer defense took up the slack on a night when things weren’t going so well on the other side of the ball by taking advantage of a struggling Knox offense.

The Panthers (4-6-1), who have been plagued by injuries in recent weeks, were held without a touchdown for the third consecutive game. They reached the red zone only once in 11 possessions and turned the ball over five times as they ended their season with a fourth consecutive defeat.

“Our defense did a great job. Our offense and our special teams did some things to really get us in a mess, but our defense played extremely well,” Mercer coach David Buchanan said.

Faulkner played a key role in that, and Buchanan said he has been a welcome addition to the team, comparing him with Harry Lewis, who played for Buchanan at Mason County from 1997-2000 and later played at Louisville.

“He’s a great football player,” the Mercer coach said. “He’s the best free safety I’ve had going back to Harry Lewis, and if you ask me who’s better … don’t make me pick. The other thing is he’s a super young man. When he came out for football … I wasn’t sure how to handle it, but it’s worked well because of Trevon’s character. He’s made it go because of how he’s handled himself.”

Another key figure in Mercer’s defensive success was linebacker Tyus Short, whom Knox coach Scott Russell said was a handful for his team.

“We couldn’t block him, and we tried several different kids,” Russell said. “They’ve got some nice athletes. They’ve got a chance to go a little ways.”

Knox managed only 159 yards on offense, and the Panthers made it past Mercer’s 30-yard line only twice.

Short also said the Titans were motivated by their second-round loss to Knox last season.

“We never forgot it. It was great to get revenge on them this year,” he said.

Mercer forced two turnovers in the first 7 1/2 minutes, as Faulkner picked off a pass to stop Knox’s opening drive and Tanner Robins recovered a fumbled punt return after the Titans’ first series stalled.

The Titans took over at the Knox 24-yard line after the fumble recovery and scored four plays later from the 21 when Faulkner made a leaping catch in the back of the end zone.

The Panthers’ deepest incursion saw them move the ball from their own 20-yard line to the Mercer 11 with 10 running plays — Donavan Arthur ran for 50 of his 100 yards on that drive — but they were pushed back to the 14 before Nick Martin kicked a 32-yard field goal for what would be their only points of the night.

Mercer took a 14-3 lead less than a minute later when Gillis threw a 36-yard touchdown pass to Faulkner to cap a lightning-fast drive in which the Titans’ quarterback went 4 for 4 for 68 yards. He finished 10 for 18 for 205 yards.

Knox’s Michael Reed returned the ensuing kickoff 33 yards to the Mercer 29, but Mercer’s Aaron Johnson intercepted a pass in the end zone to keep the Panthers from scoring before halftime, and they never got past the Titans’ 30-yard line again.

Any hopes Knox held of a comeback were dealt a blow midway through the third quarter when quarterback Jaxon Stewart left the game after reinjuring his right ankle. The Panthers’ backup was out with an injury, so they were forced to use third-string QB Adam Renfro at a time when they had to start throwing the ball more. They netted only 35 yards on offense in their four possessions over the final 15 minutes.

“We wanted to make them do things they weren’t used to doing, and that’s throw the ball, and you saw what happened,” Faulkner said.

Renfro was intercepted by Faulkner on his first series, and Mercer scored three plays later when Gillis threw a sideline pass to Robins, who raced to the end zone for a 96-yard touchdown.

Robins caught four passes for 128 yards, and Faulkner and Johnson had three receptions each.

Mercer’s offense was averaging 348 yards per game, but the Titans were held to 220 and had only 15 rushing yards in this game.

“We played good enough defense to win, and our passing game made plays, but our running game and our special teams have got to get ironed out,” Buchanan said.

Still, Buchanan said the Titans have been playing their best football of the season in recent weeks, and he hopes that continues when they go to Rockcastle (10-1), which defeated West Jessamine 54-7 on Friday.

“To beat these next guys, we’re going to have to,” he said.