Rebels ready for Moore: Boyle dominant in first round, Central next 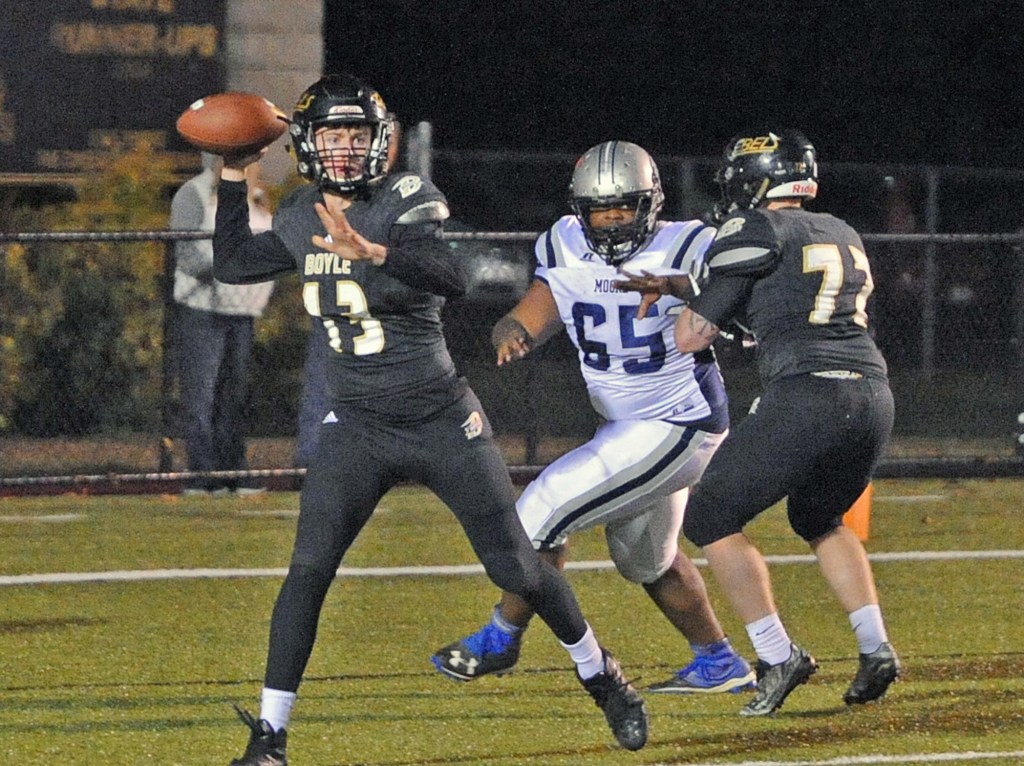 The Rebels came out and played like they practiced.

Coach Chuck Smith said he liked the way his team prepared for its first-round playoff game, and that showed in a 59-12 drubbing of Moore on Friday at Rebel Stadium.

Boyle scored on its second play from scrimmage on a 61-yard screen pass from Sam Tiller to Landen Bartleson, and the Rebels didn’t look back.

“We’re pretty excited about this one,” Smith said. “I think they guys played hard, I thought they prepared well and I think they played well. They did a nice job. Of course, it’s going to keep getting tougher and tougher because the better teams win.”

Boyle’s second drive was capped by an eight yard run by Tanner Crawford, his first of the game. He finished with six carries for 68 yards and two touchdowns.

Tiller’s second touchdown of the night came on a short throw to Reese Smith, who took the ball up the sideline and took a hit as he dove to pass the pylon and score.

Smith got his team-high seventh interception of the season just two plays later, and Boyle capitalized once again. Tiller threw to Reiley Colwick, who juked a defender and cruised into the end zone from 23 yards out.

After one quarter, Boyle led Moore 28-0.

Moore had its best spell of the game during a six-minute stretch in the second quarter. Tahj Gelin scored from one yard out after a drive that was extend by two late hit penalties on the Boyle defense.

Boyle’s next drive ended when Tiller was sacked from behind and fumbled. Moore quarterback Rae Von Vaden hit Justin Weaver for a five-yard touchdown to cut the Boyle lead to 28-12.

The Rebels’ offense settled down on the next drive, and Gunner Ashburn scored his first of two scores on a 15-yard rumble just before halftime.

“I think they were a pretty good team, they were 7-3 coming in and they do some things good,” coach Smith said. “They hurt us with the things that they do good, which is kind of expected. But I was really proud of the way our offense responded when they scored, and I was pretty proud of the way the defense, after they settled down, started covering those guys, especially in the second half.”

Bartleson went 41 yards for a score later in the third quarter to give Boyle a 49-12 lead entering the final frame. Bartleson finished with eight runs for 93 yards and a score on the ground and three catches for 85 yards and a touchdown.

In all, Boyle’s ABC backfield of Ashburn, Bartleson and Crawford finished with 33 total touches for 331 yards and six touchdowns.

Crawford scored from 46 yards out to open the fourth quarter and Nik Ruby hit a 33-yard field goal to finish the scoring.

Now, Boyle travels to Louisville to face Central. The Yellow Jackets hosted the Rebels in the second round last season and won 27-14.

“It’s just going to be a good game,” coach Smith said. “We’ve got to go there, they’re a very good football team. But I’m going to say all 16 of us are pretty good. We’ll have to check them out on tape and see what they’ve got, but you know they have a championship tradition as well as we do.”