Safety and Justice: female inmates on the rise 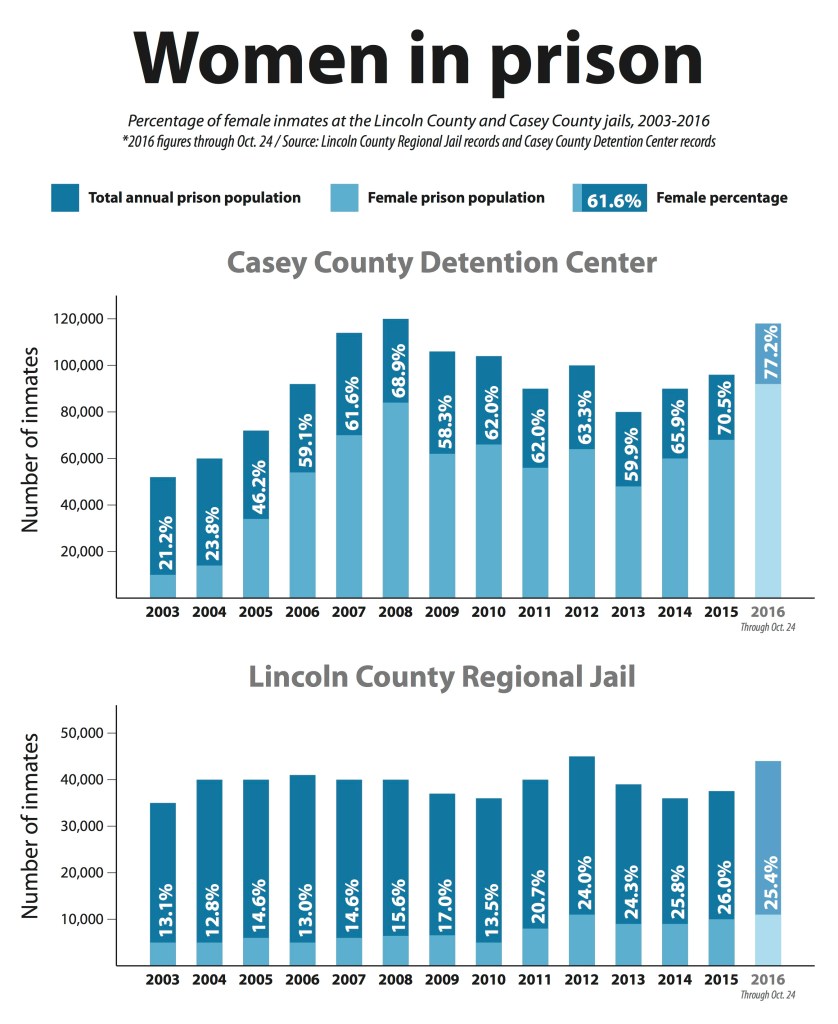 The Safety and Justice Challenge is an initiative to reduce over-incarceration by changing the way America thinks about and uses jails. The initiative—an initial five-year, $75 million investment by the John D. and Catherine T. MacArthur Foundation—features a competition to help jurisdictions across the country create fairer, more effective local justice systems.

The number of female inmates in jails, locally and nationally, have been on the rise over the last several decades.

“The numbers have really increased from 14 years ago when I started,” Boyle County Jailer Barry Harmon said. “We ran about 25 women a day then, now we range from 65 to 80.”

According to The Safety and Justice Challenge, over the last four decades there has been a dramatic increase in the number of people in jail in the United States.

Over the last 13 years, Lincoln County and Casey County jails have seen an increase in female inmates.

Over the last 13 years, Lincoln County has seen an increase of 6,643 female inmates.

Miller said their numbers have been pretty steady over the last couple of months, and right now, their daily count is around 200 women.

Why is there such a drastic increase in the number of female inmates?

According to the latest national date collected by The Safety and Justice Challenge, it says that “32 percent of female inmates are there for property offenses, 21 percent for public order offenses and 29 percent are drug related.”

“By the early 2000s, 50 percent of women in jails were in custody on public order or drug charges,” according to The Safety and Justice Challenge. “Today, arrest rates for women remain highest for ‘other-except-traffic’ offenses … substance use, such as drug possession and driving while under the influence …”

Harmon said the use of drugs is the cause of the rising numbers of female inmates in Boyle County.

“I think a lot of it is where the drug problem is getting worse across the country,” said Miller. “A lot of them are drug related.”

Miller said they see a lot of repeat offenders come in and out of the jail, and House Bill 463 has also caused the increase and bringing back the repeat offenders. The bill was signed into law March 2011by Gov. Steve Beshear, reducing penalties for some drug crimes and offering offenders treatment for addiction.

Among a sample of nearly 500 female inmates across several regions of the United States, The Safety and Justice Challenge said 82 percent of them had experienced drug/alcohol abuse or dependence. Other research has shown that, at the time of the offense, females were more likely to have been using drugs than men.

According to Harmon and Miller, the only way to help decrease the rising numbers is to have drug treatment and rehab available for the inmates.

“The jails need to look at more programs for rehab,” Miller said.

Miller said Casey County has a substance abuse program in their detention center for women only, which started in September of this year.

“We try to do our best,” Miller said. “As of right now, I don’t see any indication that they will go down.”