In 1874 Kentucky School for the Deaf began publishing a weekly in-house newspaper, the Kentucky Deaf-Mute, to give the male students an opportunity to learn the printing trade. KSD published the newspaper continuously from 1874 to 2004 with only a name change in 1896 – to the Kentucky Standard. From 1883 until 1942 George M. McClure was the editor of the paper. His relationships with students and wide connections with schools for the deaf throughout the country give a glimpse of the life of students and staff in a residential school for the deaf and show how the community touched the lives of students and staff at the school.

The following is a reflection of Danville Boy Scouts troops’ numbers four and five, enrolled October 10, 1916:

The official records at headquarters in New York City show that this is the first instance, with one exception, of the organization of troops among deaf boys. The “exception” did not last long and was soon disbanded. After a year’s work at the Kentucky School for the Deaf we are prepared to say unhesitatingly that the work of the Boy Scouts of America is thoroly [sic] practical and fits admirably the need of our deaf boys.

A week ago we went to the moving picture show after which Misses Stephens and Cary Willis took us to the Street Fair. We enjoyed seeing the Ferris wheel. We planned to see the baby which was born without hands and feet but we did not see her for we had to return as it was time for supper. We saw the high dive by a young woman. The distance was said to be 80 feet. It made us all open our eyes and mouths.

Some of the girls have been vaccinated and don’t want you to touch their sore arms. Claud Wesley received a letter from home stating that his father sold an 800 pound hog. Pretty big hog drat. How much was it worth at the market price today?

The boys enjoy looking at Burchell Smith’s new fashioned hat. It is Burchell’s first time to wear such a sport hat, and the boys stand and admire it open mouthed. Burchell will be getting a silk hat next.

Gladys Risley was frightened almost out of her wits in school Thursday morning when she took a box out of her coat pocket and on opening it found a real live mouse in it. Someone was teasing her.

On the 17th of September the pupils gathered to resume their studies. We have a good system for reassembling our big household and nearly all the 375 pupils expected came in promptly and safely on the opening day. A number of pupils were detained at home for various reasons but most of these have already come back. The school will be crowded this year, and we shall not be able to receive all who apply for admission. Additional dormitory space is an ‘urgent’ need. While no improvements and but few repairs were made during the summer for lack of funds we hope to show in the coming year that there is more to a successful school than fine buildings and showy equipment.

The Colored school begins the Session with an entire new staff of officers with one exception —Mr. J. F. Royster, head teacher. In addition, … Mr. and Mrs. Raymond Chesnut have moved in and will help promote good discipline by keeping an eye on the pupils while out of school. The number of pupils in attendance is in the neighborhood of 24, the same as last year.

THEY HAVE GOOD JOBS

The United States Government has taken over the uncompleted State hospital for the insane just outside Danville on the Shakertown road and is enlarging the plant which is to be used for the care of soldiers suffering from mental disorders. Eighteen new buildings are to be erected, and the contractor has given employment to three of our old boys — Terry Johnson, Carl Woosley, and James Plummer. Johnson and Woosley are carpenters while Plummer is a laborer. All make excellent wages.

FROM THE GIRLS’ SIDE

Broomstick skirts are all the rage among the girls now. Hey! Mr. Editor; Can you remember when leg-o’-mutton sleeves and bustles were the thing? [Yes; they were dreadful. Ed.]

After the long payless days of the vacation, [paychecks were distributed] for the first time this session at the beginning of this month. After that happy event one of our teachers came home from the bank with real money in her purse. She laid the purse down for a moment in a front room while she stepped out; when she returned the purse and its contents were gone. And though the teacher is usually a tender-hearted individual, in this case she hopes…the money will bring the thief all sorts of bad luck, even leading to his, being hanged by the neck (or heel) until he is dead, dead, dead.

Coach Hoffmeyer has moved the date of the big annual Athletic Association entertainment from October 31 to November 15, as the Hallowe’en date was a little too close to the Homecoming celebration. A special effort is to be made to raise a good sum of money at this entertainment for the football team needs new uniforms and other equipment, and as the Association receives no direct financial aid from any source, the coach and the members must themselves raise funds to keep it going.

Just now the Association needs $200 for uniforms and supplies and the coach has put it up to the boys to put their wits to work to raise this sum. Lend your encouragement to the boys — it would be nice to cooperate [donate] a dollar’s worth if you can spare the dollar.

The Hundley & Swain Dairy Company has dissolved and Mr. Jack Swain of our school is now associated with the Swiss Milk Co. of Danville which has taken over most of the engagements of the old firm.

SOME CHANGES IN THE COLORED DEPARTMENT

Our school opened her doors wide to welcome the boys and girls, who enrolled on September 17th. There were twenty-one pupils who attended school last year and three new ones. The three new pupils are Dorothy Shaw of Paducah, Ky., Margaret Martin, of Greenville, Ky., and Walter Johnson of Ashland, Ky. Three pupils, who attended school last year, did not return this year. Their names are Mary Caldwell, Myrtle Young and James Dunson.  One of the girls has just returned, a month late. She lives in Fulton County where cotton, not corn, is the big crop and she was detained at home to help pick the cotton…

A new teacher was appointed to take the place of Mrs. Mary Fosdick, who passed away last May. The new teacher is Mrs. Frances McClung, of Stanford, Kentucky. She teaches the Primary classes in a new schoolroom, which is situated on the first floor near Mr. Royster’s schoolroom. The room which was used by Mrs. Fosdick and her pupils last year as a schoolroom and a chapel is changed to a playroom for the girls and boys. The boys and girls are now using Mr. Royster’s schoolroom during their study hour every evening.

We have a new housekeeper for our .department. Her name is Mrs. Hugh Helm, of Lebanon, Kentucky… She filled the position of Mrs. Emma VanPelt, who died suddenly last June. Mrs. Madison J. Lee is the matron of this department, and also, the matron of the White Department of K.S.D.

The girls have a new supervisor named Miss Clyde Reynolds, of Cave City, Ky. Miss Reynolds replaces Miss Iva Taul, who was married last August. She was a graduate of the Kentucky School for the Deaf in the White department in 1927,

ALONG THE SIDELINES By Chas. A. Thomas

A successful aerial play by the Ohio boys in the homecoming game October 18 accounted for Ohio’s only touchdown against Kentucky. R. Jones, the Ohio back, carried the ball over standing up. Try for the extra point by Stelzer was good.

During most of the last quarter the onlookers at the game thought Kentucky would have to be content with a 7-0 victory for Ohio -but things changed somewhat during the last minute of the play. Kentucky had carried the ball near its goal line when Coach Hoffmeyer sent in Lawrence Harrod, substitute quarterback. L. Harrod sensing only about 30 seconds of time left took to the air. Heaving his first pass to his tall brother, Herman, the throw was good. A second pass from L. Harrod to Ben Williams,who was standing in the scoring zone, was good for Kentucky’s first touchdown. It then appeared that the score would be tied but the try for the extra point failed. A few seconds later the game was over. Score Ohio.7, Ky. 6. 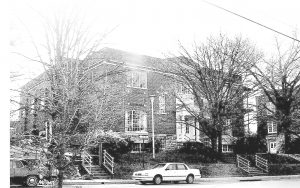 KSD’s First Gymnasium – Completed in 1925 and later named for a KSD Superintendent, Augustus Rogers, Rogers Hall was located on the west side of the campus facing Third Street. A new gymnasium/pool complex replaced Rogers Hall in 1973. For a couple of decades after that the younger boys used Rogers Hall for activities and many Danville and Boyle County boys played their league basketball games there. It was razed on Nov. 23, 2010.