Question: Hi Jerry, I have a large weather vane sitting on the ground in my shady, “hidden garden.” I’m afraid that the wooden base is just rotting and the rooster’s paint is peeling. The base is 22 inches square. The rooster is flat and looks like it is made out of sheet metal. From the top of his tail to where it attached to the cupola, he’s 19.5 inches tall. Do you think this is worth saving or selling? Thanks so much! 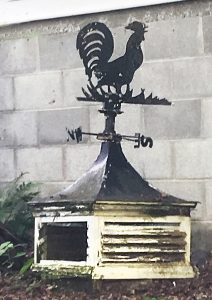 Answer: Of course it’s worth saving. This is a great weather vane. The earliest recorded weather vane honored the Greek god Triton, and adorned the Tower of the Winds in Athens in 48 B.C. The figure, which many believe had been 4 to 8 feet long. It had the head and torso of a man with the tail of a fish.

To early cultures, the winds had divine powers. Just think of it, the winds controlled the rain, it took out and brought in your sailing ships. It cooled you or it blew you away.

The Vikings were very partial to having weather vanes on their homes and ships, in traditional Nordic shapes.

Of course, America is no stranger to weather vanes either. With many early, famous and notable weather vanes running from New England all the way down to Virginia with Mount Vernon and Monticello sporting weather vanes.

Now that some history is aside, your weather vane dates from the 1940s to the mid 1950s — just based upon the style and its construction. I like the styling of your rooster, striding across the land with the grass under his feet.

Do you know why roosters were popular as weather vanes? Roosters have been atop of church steeples since the 9th century, when the Pope declared that every church should show a rooster or a cock on the church steeples. This was to remind people of the prophecy that Jesus made to his disciple Peter, that the cock would crow, after Peter had denounced Him three times.

Sure, your vane isn’t super early or hand made but it has style and with its rust and rot it has a shabby chic appeal.

I couldn’t really tell if your cupola is badly rotten or even if it could be repaired. A cupola is that little house that the weather vane is attached to. Let’s say that it is and we’ll just evaluate the weather vane portion. I’d say that even with some rust, that this vane in a retail store will have a price tag of about $100 on it. Now, if it was all in good condition, including the cupola, its price would be closer to $ 250 in a retail store.

Gee, try pricing them at a fancy schmancy garden center sometime and see what the new junk is selling for. I think that it’s a great piece. Thanks for sharing it with us.