When Danville police responded to the areas of West Erskine Avenue and West Mason Avenue for a report of shots fired, they observed more shots fired and located Parkey in his backyard who was subsequently arrested and charged with alcohol intoxication and several counts of first-degree wanton endangerment and was lodged in the Boyle County  Detention Center.

No mugshot was available for Parkey by press time.

Robin Neil Dunn, 19, of Danville, was arrested Tuesday on charges stemming from an incident involving a shooting at Triangle Mart BP earlier this month.

At approximately 1:30 p.m., detectives from the Danville Police Department followed up on a suspect lead that came from the Patrol Division regarding a first-degree assault attempt that occurred at Triangle Mart BP. The information provided by patrol led detectives to the residence of Robin Dunn, of 655 West Lexington Avenue, Apt. C. 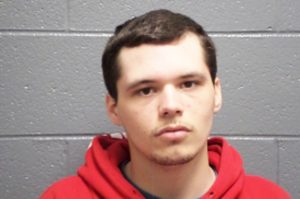 Dunn voluntarily came to the Danville Police Department to speak with investigators. During the interview, Dunn confessed to attempting to shoot both store clerks inside of the business on Nov. 2. Dunn was then arrested and while awaiting processing, he became combative in the interview room, kicking a large hole in the wall and threatening police.