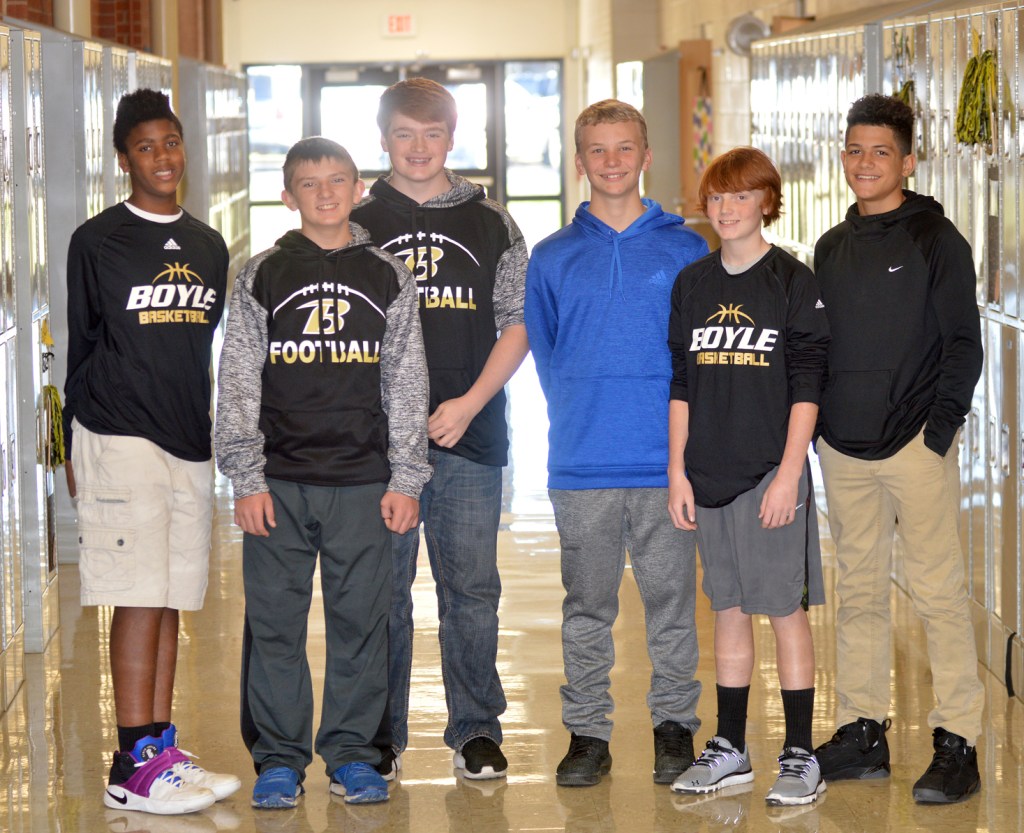 Jeremy Schneider/jeremy.schneider@amnews.com Six football players from Boyle County Middle School were named Kentucky All-Star team that will play in the FBU National Championships. They will play in Atlanta over the first weekend in December with the chance to advance to games in Naples, Florida, later in the month. Boyle team members are, left to right, Tommy Zeismer, J.D. Brown, Zach Mason, Jackson Smith, Cole Sims and Cash Logan.

Ever since he was in third grade, Zach Mason has wanted to play for the Kentucky All-Star football team. Now as a seventh grader at Boyle County Middle School, he’s made the team, and he won’t be alone — six fellow BCMS students were selected to the sixth and seventh grade teams.

The teams are made up of 35 players from around the state. They’ll play at least two games, and as many as three, the first weekend of December in Atlanta.

“We’re supposedly the best 35, 40 kids in the state of Kentucky going against the best of the best,” Mason said.

The players had to come through tryouts — sixth graders tried out at Campbellsville while seventh and eighth grader tryouts were at Bryan Station High School. Practices start this weekend in Louisville and Richmond.

“It was pretty hard but it was fun at the same time,” Brown said of the tryouts.

The registration fee for the players is $275, and that doesn’t cover travel, lodging or food. There is an account set up at Farmer’s National Banks where people can donate money to offset some of these costs; they are asked to reference BCMS Kentucky All-Star Football Team when donating money. People can also contact Laura Mason at 859-583-9350 or Heather Sims at 859-583-1277 to find out how to make their donation tax deductible.

“The kids will have other expenses, from hotels to food and all those things,” BCMS football coach Bill Mason said. “It can be a drain on the pocketbook, and I’d say it’s safe to say nobody has an extra $500 laying around right before Christmas.

“Everything that goes on here at Boyle County, there’s a lot of pride, from the school and the parents and the community. People here support extra curricular activities, and it doesn’t have to be football or basketball.”

While this will be the players’ first experience playing competitive football outside of the state, they have competed in other sports. Logan has played basketball in Florida, Sims and Mason has traveled to Alabama for baseball, and Brown has competed in karate tournaments in Indiana.

According to Mason, players from Lexington, Louisville, Owensboro and Bowling Green, among other cities, will join the Boyle players on the teams. The talent on Team Kentucky coupled with the talent on the teams they will face is something the players will remember.

While Sims and Zeismer spent the fall playing for Perryville and Woodlawn, the seventh graders were key contributors to the BCMS A-team, which features mostly eighth graders and finished 7-4 and second in the Salt River Conference.

“Boyle County has a special thing, and until you go away from Boyle County, you don’t realize how special it is,” Mason said. “Boyle County Youth Football does a great job of teaching fundamental football and being active in the community and getting their name out there. It’s a strong youth league program and the middle school picks up where they left off and we all try to incorporate what the high school is doing.”

And now these players get to bring the experience of playing for Team Kentucky back to Boyle County with them.