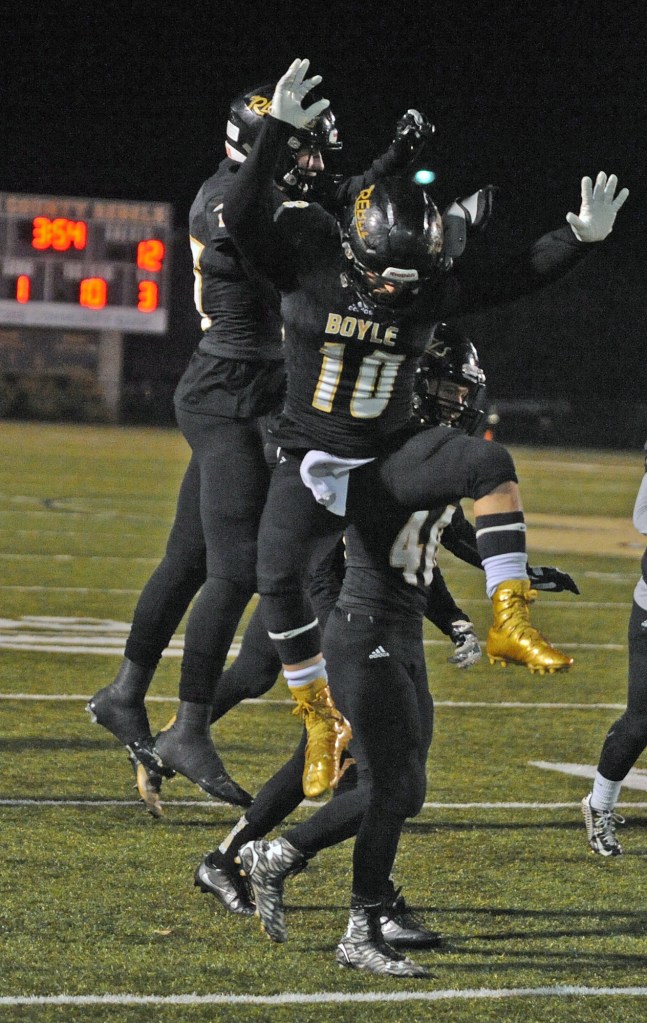 For the second consecutive year, two powerhouse programs will square off in Louisville for the second round of the Class 3A playoffs this weekend.
Boyle County travels to Central for the second straight season for its second-round contest, and like last season, the teams look tight on paper.

Both teams had poor starts to the season by their standards: Boyle started 0-3, Central started 0-4. But each team rebounded in a big way, with Boyle going 7-1 since that start and Central going 6-1.

“Central is a really good football team, they played a really difficult schedule at the beginning of the season, sort of like we did,” Boyle coach Chuck Smith said. “They play fast, they play with a lot of pride, they play hard. They refuse to stay blocked and their playmakers make plays. They’ve got a really nice football team, and it’s going to take a great effort by us to be able to win.”

It might look like a toss up on paper, and polls are mixed as well. Central is ranked No. 6 in the class by the Associated Press, Boyle No. 8. The Louisville Courier-Journal’s Litkenhous Rankings have Boyle at No. 5 in 3A and Central at No. 8. MaxPreps.com ranks Central No. 5 and Boyle No. 6. Dave Cantrall’s rankings in the Lexington Herald-Leader have Boyle at No. 4 and Central at No. 8.

No matter where you look, the teams are close. It was the same last season, and that experience is a reminder for Smith’s team now.

“Our players have just got to play harder than they’ve played all year long,” he said. “I think we’re very capable of doing that. It’s going to be a great challenge for us, and I think our players are up for that challenge.”

In 2015, the two teams had a combined three losses entering the playoffs. Central won 27-14 after five Boyle County interceptions and a blocked punt for a touchdown.

“Any time you play in a big game, turnovers have a lot to do with it,” he said. “You’ve just got to protect the football. What Louisville Central has made a living on is they’re good on offense, but they plan to win on defense and special teams. Last year, we probably played good enough on defense to win, played OK on offense, but we just got dominated on special teams. They returned two punts that led to scores, and they blocked a punt that led to a score. Our special teams have got to play better in this game. We can’t let them have specialty team scores and expect to win this football game.

“Our offense has got to be able to move the football. That’s the bottom line. Hopefully our defense will be ready to play.”