The Centre College choirs will fill the next few weeks with music as they give six concerts under the direction of Johann van Niekerk, assistant professor and director of choral ensembles. College organist and instructor of music Zach Klobnak will accompany the choirs.

On Friday, Centre Singers joins Lexington Philharmonic at the Singletary Center for the Arts in Lexington for a performance of Stephen Paulus’ “To Be Certain of the Dawn.”  Paulus is a much-beloved American choral composer, known for his simple, beautiful settings such as “Pilgrim’s Hymn” and “The Road Home.” 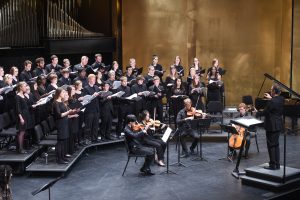 The Centre College Concert Choir and Orchestra Performed in Newlin Hall on April 17, 2016.

Van Niekerk explains “To Be Certain of the Dawn” was written for the 60th commemoration of the liberation of the concentration camps in World War II, and centers on the Holocaust, with multimedia elements included as part of the performance. A discount is available for Centre faculty, staff and students. (Contact van Niekerk for details.)

“It’s certainly been unusual to grapple with such dark subject matter, but also an incredibly rewarding experience to see how the human spirit triumphs, even in the most uncertain times, as the title suggests,” he says.

The other concerts are free and open to the public.

Both choirs — Centre Singers and Concert Choir — will present music celebrating perseverance and memory 7:30 on Nov. 17 at The Presbyterian Church of Danville. The concert will include excerpts of the Paulus oratorio and a variety of other music that further addresses the broad spectrum of human experience and perseverance as expressed in modern re-imaginings of such ancient expressions as those from the Hindu Upanishad and the Ute tribe, medieval chants, baroque, 19th and 20th Century and modern works, including American folk and pop music.

This concert will also include the college choir presenting the regional premiere of popular contemporary American composer Eric Barnum’s “Music in the Night,” a lyrical setting for choir and piano.

“The enthusiasm with which the choir has received these works has really blown me away, whether it be an early music piece or a Wailin’ Jennys drinking song,” says van Niekerk.

Both choirs also will perform at the annual Festival of Lessons and Carols, a service of music and readings, 7 pm. Dec. 2 at The Presbyterian Church of Danville.

“Both of these choirs have worked exceptionally hard and shown great spirit and teamwork,” van Niekerk says of the full November schedule. Indeed, his enthusiasm is obvious as he concludes, “I feel fortunate to be their conductor.”