A blast with brass: Sound the Trumpets features DiMartino and Foster in a special show 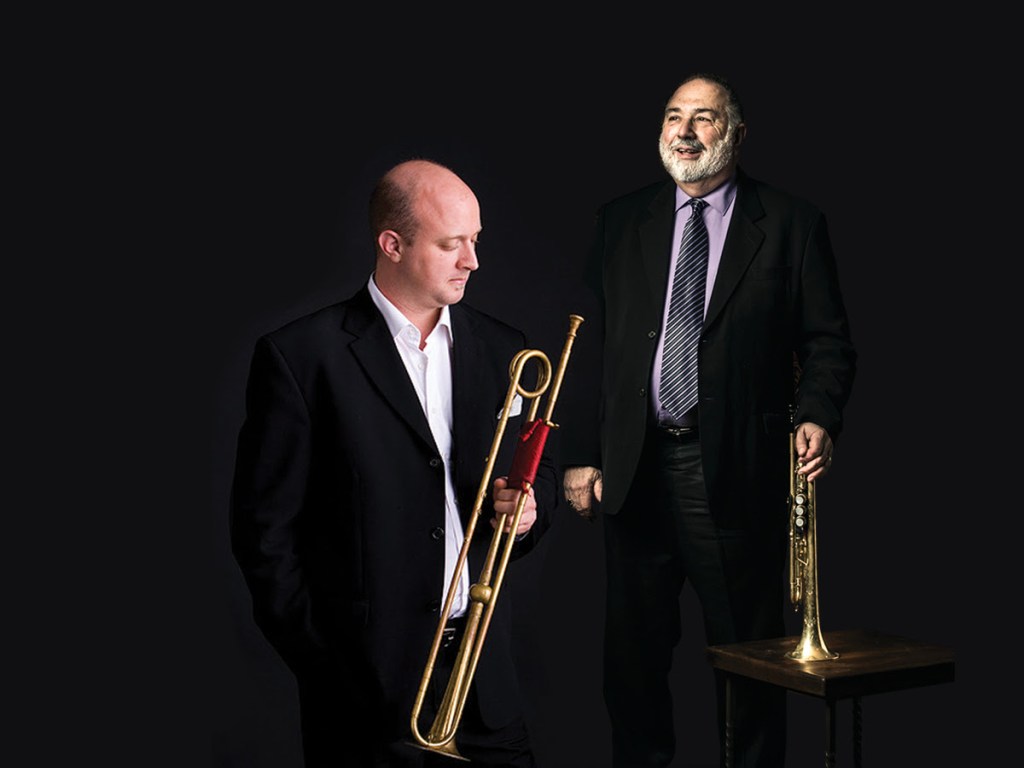 World-renowned trumpeters from two sides of the globe unite when Danville local, Vince DiMartino, joins Australian, John Foster, on the Weisiger Stage Friday, Nov. 18 for Sound the Trumpets! In a fast-paced and often humorous way, these master performers will use relics, ranging from found objects to the most fragile and intricately constructed instruments, to tell the story of one of the world’s most vibrant and recognizable instruments: The Trumpet.

“When you have a superb talent like Vince DiMartino living in your midst, it is important to showcase his talent locally in a way that is unique to the community and to the artist,” said Norton Center executive director Steve Hoffman. “Vince and I sat down and discussed how to present a music concert that would be exciting, fun, musical and meaningful. He wanted to invite John Foster back to the United States and do something other than a simple recital. We ultimately landed on the idea of taking an audience on a journey through time that explores all types of trumpets and trumpet music. The performance will feature music excerpts, a little narrative and a lot of brass. He expects that dozens of trumpets will be on stage that he and Foster will use along their musical journey. We laughed about how fast-paced the performance will be and how fun it will be to play so many different musical styles. We also thought about how incredible a trumpet concert will sound in the intimacy of Weisiger Theatre. This is how we honor a rock star!”

DiMartino is known as one of the most sought after trumpet performers and educators in the world. Since graduating from The Eastman School of Music in 1972, professor DiMartino taught at the University of Kentucky until 1993. At that time, he began a new appointment as Distinguished Artist in residence at Centre College in Danville, Kentucky where he taught trumpet, brass and jazz ensembles, and jazz history. He also served as the Music Chair, coordinator of the Centre College Instrumental Program, and was honored by the title of Matton Professor of Music. He has performed with some of this country’s finest jazz and musical ensembles, including the highly acclaimed Skidmore Jazz Institute, the Army Jazz Band, the United States Marine Band, the Cincinnati Pops, the Lionel Hampton Band, the Chuck Mangione Band, the Clark Terry Band and The Eastman Arranger’s Holiday Orchestra. Locally, he might be best known as one of the co-founders of the Great American Brass Band Festival.

DiMartino has twice served as president and vice president of The International Trumpet Guild as well as a member of its board of directors. He currently serves as chair of the Board of Directors of The National Trumpet Competition in Washington, D.C. In 2004 he was honored as the CASE Professor of the Year for the state of Kentucky and received The Governor’s Lifetime Achievement Award in 2008.

Australian John Foster currently serves as the artistic director of the Australian Baroque Brass and is widely renowned as the foremost authority on historical trumpet and cornetto. A member of the Sydney Symphony from 2001-2013, he has appeared as a soloist at festivals and concert series worldwide, performing with many leading orchestras including the Sydney Symphony,the Australian Chamber Orchestra, the Academy of St. Martin in the Fields, the Adelaide Symphony, Concerto Grosso Heidelburg, the St. Thomas Boys’ Choir of Leipzig (Germany), and the Collegium Musicum Grossmunster (Switzerland), to name a few. Foster also performed J.S.Bach’s Brandenburg Concerto No.2 with Belgium’s leading baroque orchestra, Il Fundamento, in 2011 and was the soloist for the launch of the Kammerorchester Basel’s (Switzerland) 2012 season.

Like DiMartino, Foster is dedicated to music education and has given master classes and lectures throughout the world including at the Juilliard School of Music, Sydney Conservatorium of Music, the Hong Kong Academy of Performing Arts, Northwestern University, and Indiana University, among others. He is the author of two books: The Natural Trumpet and Other Related Instruments” released in 2010, and “The Baroque Trumpet Revival” released just last year and met with critical acclaim.

Vince DiMartino and John Foster will perform as a duo in Weisiger Theater in a concert featuring a variety of instruments from the trumpet family including the conch shell, Shofar, Digeridoo, and English Slide Trumpet and predominately Brass music styles such as the music of the Civil War, New Orleans Jazz, Pops, and Classical.