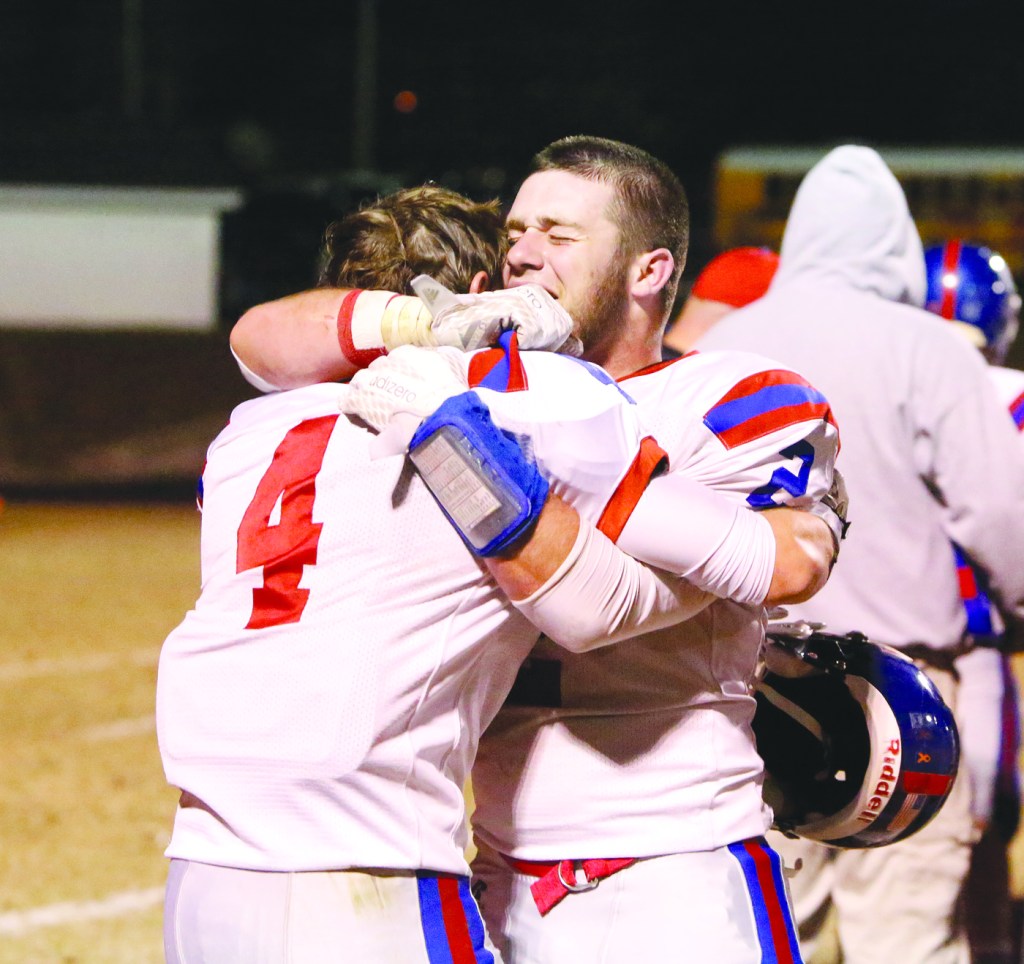 Mercer County is chasing a championship, like every other football team in the playoffs. All the Titans really wanted Friday night, however, was the chance to keep their team together for one more week.

It took everything they had, but the Titans extended their season with a 31-30 overtime victory over Rockcastle County in the second round of the Class 4A playoffs.

Blevins was still wearing tears of joy on his face as he talked about what it means for Mercer to play on.

“I love this team,” Blevins said. “It means the world. I can’t describe it any better than that.”

It means a great deal to Mercer coach David Buchanan as well.

“I want a championship, sure, but the main thing is I just want to get to coach this team one more week. And I tell them that all the time,” Buchanan said. “And I do want to win — I’ve never been a part of a state championship, and I’d love that — but … I want to get to be a football coach one more week, and I think the kids are like that, they want another week to be a football player.”

Mercer (8-4) moved on to the regional finals for the first time since 2013. The Titans will play at Wayne County this Friday for the second time this season.

There were times, however, when it looked as if this might be their last night together. They fell behind by two touchdowns in the first quarter, lost the lead twice in the fourth quarter and faced an all-or-nothing play when Rockcastle (10-2) decided to go for two following its overtime score.

Rockcastle kicker Dalton Rowe had tied the game with a 33-yard field goal with 19 seconds left in regulation, but the Rockets opted not to kick after Payne scored on a 2-yard run in overtime.

With their quarterback and their most prolific running back banged up, they turned again to Payne, who carried the ball on seven of their 19 plays in the fourth quarter and on all three plays of their overtime series.

“I saw them line up, and I knew they were going to try to just run over us in our goal-line (defense). I thought he could get two yards; I didn’t think he could get three,” Buchanan said. “We talked about calling timeout, and I said, ‘Just let it ride.’ I didn’t want to give them a chance to change their mind. Let’s roll the dice here.”

“I worked my whole life for that,” Blevins said. “We knew they were going to run it — that’s all they’d been doing and we were having trouble stopping it — but this time we just stepped up as a team. We worked all year for this.”

Moments earlier, Mercer put the pressure on Rockcastle when Gunnar Gillis threw a 12-yard touchdown pass to Trevon Faulkner, who leaped high above a defender in the end zone to make the catch.

“I know I can just throw it up to him, and he’s going to go get it every time. It’s just great to have somebody like that,” Gillis said.

The Titans ran the ball on the first play of overtime before Buchanan called the play for Faulkner.

“Their defense made that decision for me, because we already had three plays scripted,” Buchanan said. “When they blew that first one up, I said, ‘Skip it, it’s not going.’ So I’m like, ‘OK what are the bullets that I don’t want in my gun when it’s over?’ I’m not going to go home and say, ‘What if we had given Trevon and Gunnar a chance? We’ve got to give them a chance.’ And they did it.”

Gillis got plenty of chances to throw the ball in a game in which Rockcastle had the edge at the line of scrimmage. He had season highs in completions and attempts, going 16 for 32 for 151 yards.

He said the Titans knew they would have trouble running the ball — they tried only 17 times — but they saw an opportunity for success through the air.

“They blitzed, so you can get the short routes on them,” he said.

Tanner Robins had six receptions, Faulkner had four, and Seth Tatum had three for the Titans.

D Smith ran the ball 11 times for 83 yards for Mercer, and his 47-yard kickoff return to the Rockcastle 23-yard line ignited the Titans after the Rockets had taken a 21-17 lead with 6:06 remaining.

Three plays after that return, Tatum caught a 24-yard touchdown pass to put Mercer up 24-21 with 5:03 to play.

Rockcastle drove from its own 44 to the Mercer 15 but was out of timeouts and running out of time. Facing fourth-and-5 and a running clock, the Rockets turned to Rowe, who tied the game on his only field goal of the season.

Mercer trailed 14-0 after one quarter but got back in the game with two second-quarter scores. Gillis threw a 9-yard touchdown pass to Robins to put the Titans on the board, and after Tatum recovered a fumble, Garrett Dean kicked a 25-yard field goal to make it 14-10.

The Titans took their first lead late in the third quarter after Kaelin Drakeford recovered a blocked punt that Rockcastle mishandled, one of three turnovers by the Rockets. Smith opened the drive with a 38-yard run and scored on a 3-yard run to give Mercer a 17-14 edge.

Mercer couldn’t cash in after Tatum intercepted a pass late in the third quarter, and Rockcastle drove 80 yards in 12 plays to regain the lead midway through the fourth.

The Rockets ran the ball on 58 of its 67 offensive plays and outgained Mercer 371 yards to 214. It was 113 yards to 10 in the fourth quarter, when Rockcastle possessed the ball for all but 77 seconds.

“One more week, one week at a time,” Gillis said.

Buchanan said the Titans earned the right to celebrate a memorable win before they refocus.

“They’ll remember it for the rest of their lives,” he said. “It was a great memory, and I want them to be really happy about it. And then Monday it’s got to get back to, ‘This is football, and I’ve got to be better at the end of practice than I was when it started.”