Centre women move on to second round 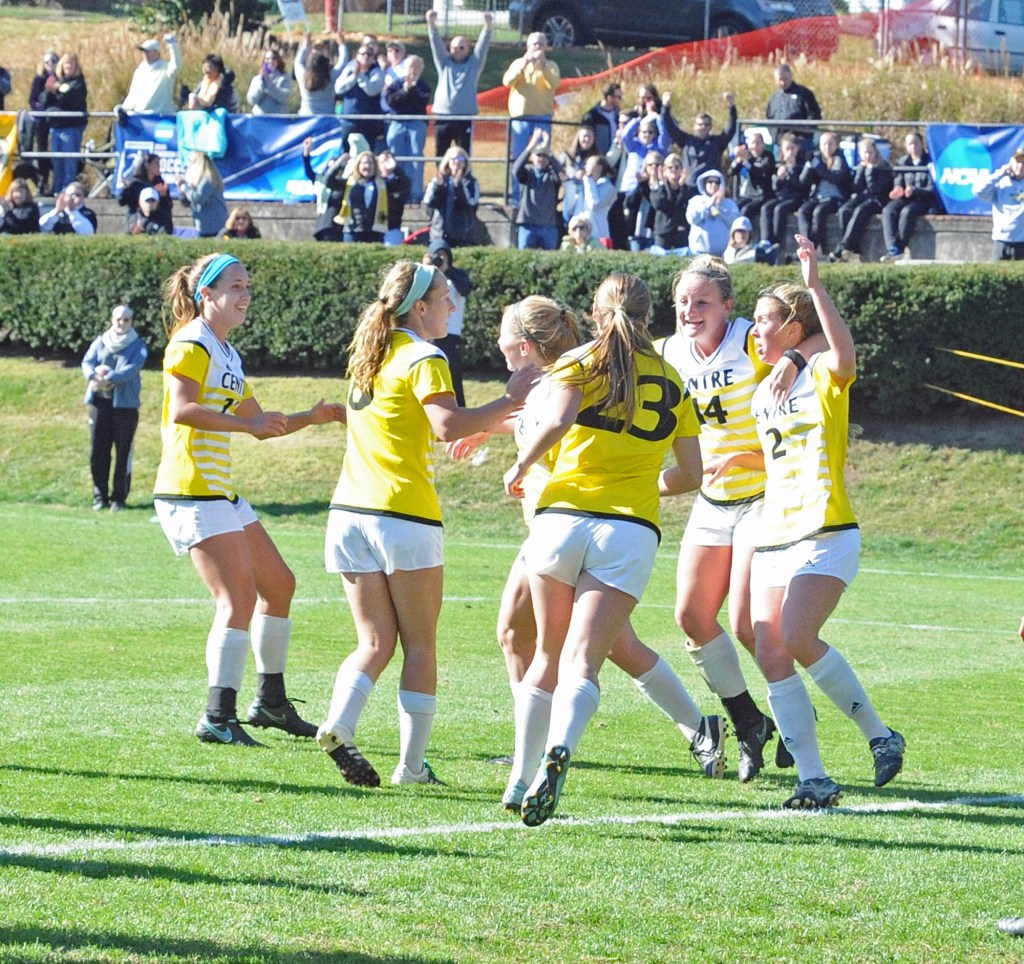 It took some time for Centre College to settle in, but the women’s soccer team came through in a big way in the first round of the NCAA Divisioln III Tournament, beating Piedmont 4-1 behind three second-half goals.

The Colonels beat Piedmont 1-0 earlier in the season, so coach Jay Hoffman knew it would be a challenging game. Playing without All-American and leading scorer Destinie Graves increased the difficulty, but Centre’s depth showed in its dominating display.

“Sometimes when you don’t have a player, other players have to step up and we have to do the little things,” Hoffman said. “I thought the team did a very good job again today of doing the little things, especially in the second half.”

Both teams struggled to get anything going in the first half, although Centre had a majority of the chances. The Colonels struck first on a headed corner from Alana Hughes to Hannah Sirkin. Just 12 seconds later, Cassidy Reich scored for Piedmont to tie the game at 1-1.

“In the first 20 minutes, both teams are trying to sort out the style,” Hoffman said. “They were pressuring us and we had to be better on the ball, our passes had to be sharper and they weren’t as good as I wanted them to be.”

The teams were knotted 1-1 at the break, even though Centre held a 12-2 advantage in shots at halftime.

In the second half, Hoffman’s team burst out of the gate. Shannon Murray headed in a cross from Amber Cowell to give the Colonels a 2-1 lead, and they didn’t look back. Twelve minutes later, Hughes got a goal of her own, blasting a shot into the roof of the net on another Cowell cross.

Throughout the second half, Hoffman was switching his players. With a two-goal lead, nearly all of Centre’s starters were out of the game.

“We made a lot of rotations,” he said. “I wanted to trust our players and give rotations because I looked at today, it’s not just a one game, it’s a two game weekend. If you can get minutes off of your top players, players off of the bench come in and do good work, that should put us in a good situation for having fresh legs tomorrow.”

Hoffman’s trust paid off, and his bench continued to deliver. Keeghan Francis scored in the 81st minute to put the game on ice, 4-1.

“You’ve got to trust your players,” Hoffman said. “Nobody really sees how they do in practice, but you’ve got to understand, we’ve been going with our top group with our next group for weeks, and our next group is very, very talented. If you can’t have confidence in those players, you’re not developing your program. Next year we’re losing more players, you’ve got to expect that these players are itching to come out and do well. In a game like this, you want them to come out and do that.”

Hoffman praised his bench for bringing balance to the game.

“Coming off of the bench, I thought Sarah Waldo did a really good job calming the game down and making passes,” the coach said. “Accuracy wise, she wasn’t trying to hit the home run ball, she was calming things and including everybody. I think everybody really played steady.”

Sirkin, a starting forward, accounted for just one of the Colonels’ goals, but Hoffman said her movement off of the ball opened up the Piedmont defense.

“Hannah Sirkin did a really good job. Second half especially, she did a really good job finding a balance between her and the outside forward,” Hoffman said. “She didn’t crowd her too much, she gave her some room, but when she needed support she was right there to support. I thought she did well.”

The Colonels will break for 24 hours before playing Hardin-Simmons, which beat Washington and Lee 3-0 in the other first-round matchup hosted in Danville.

“I think our strength of schedule and the teams we played throughout the year, and then our conference prepared us for a game like this,” Hoffman said. “Our conference is very, very challenging, we’ve got many teams that should be here. Playing those games really gets you ready for that next level.”