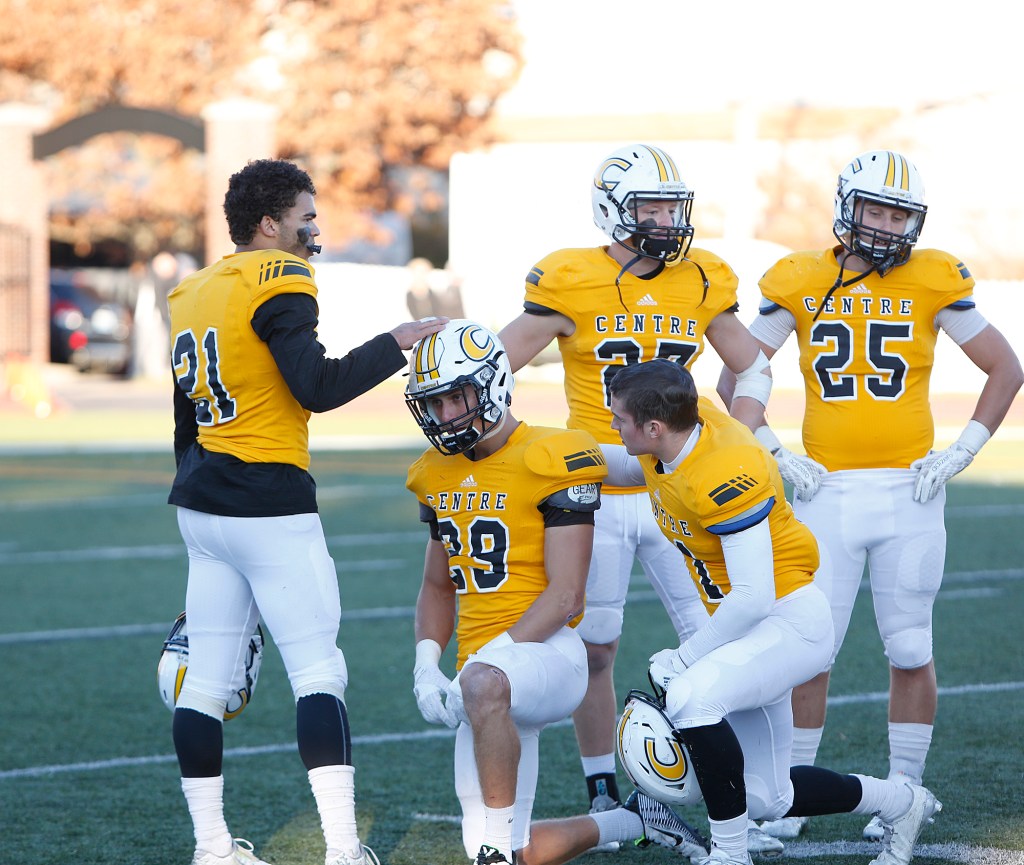 With a conference championship and a postseason berth on the line Saturday, the Colonels poured everything they had into their game against Berry.

Mistakes and missed opportunities took a heavy toll, however, and their season ended with a 21-19 loss at Farris Stadium.

Centre lost the momentum when two turnovers led to what could have been as much as a 21-point swing at the end of the first half. Coach Andy Frye said he was disappointed with the result but proud of the way the Colonels battled.

“There’s nothing to be ashamed of,” Frye said. “Our players, they played hard. Berry was a very good football team, and we fought to the end. But we had our opportunities, and we just never were able to capitalize on them.”

It was the first loss for Centre (8-2, 6-2 Southern Athletic Association) in four games against Berry (9-1, 7-1) since the Georgia school first fielded a team in 2013. The Vikings will share the SAA championship with Washington (Mo.), which gets the league’s automatic berth to the NCAA Division III playoffs because of its win over Berry.

The Colonels were playing for their third trip to the playoffs in six years, but they never fully recovered after Berry scored 14 points in 17 seconds late in the first half to take control of the game.

“I feel for the seniors,” Frye said. “This is what their goal was, and unfortunately we weren’t able to capitalize on it.”

Two of the Colonels’ four turnovers led to those scores, which flipped what could have been a 13-10 or 17-10 Centre lead to a 14-10 halftime deficit.

“That’s hard to believe,” Frye said. “I’ve never seen anything like it.”

Centre led 10-0 when Cal Lewellyn intercepted a tipped pass and returned it 26 yards to the Centre 46-yard line with 1:39 remaining in the first half. The Colonels got as far as the Berry 34 when quarterback Devin Hayes was stripped of the ball by Berry’s Mamadou Soumahoro, who recovered the fumble and pitched it to 270-pound defensive lineman Justin Akin, who in turn took it to the Centre 15.

A pass interference call moved the ball to the 2, and Austin Lowe ran in from there to give the Vikings their first touchdown with 24 seconds left in the first half.

Centre’s Nate Sparks fumbled the ensuing kickoff, and Berry got the ball back at the Colonels’ 11 after a recovery and a 9-yard return by Austin Haight. This time, a pass interference call against Berry pushed the ball back to the 26, but Slade Dale threw to Trey Ciresi in the end zone for the score that put the Vikings up 14-10 with seven seconds left.

Berry scored again on its first series of the second half, driving 77 yards in less than three minutes to go up 21-10 on Tate Adcock’s 19-yard pass to Tristen Cline.

The Colonels answered with a 37-yard field goal by Ben Logsdon, who also kicked a 23-yarder in the second quarter, but they netted only 16 yards on their next two series.

They scored again early in the fourth quarter, when Hayes went 5 for 5 for 57 yards in an 83-yard drive that took just two 2:12 and ended with Colin Burnam’s second 1-yard touchdown run of the game.

The Colonels struggled to run the ball all afternoon, averaging 0.6 yards on their 35 rushing attempts, which included nine quarterback sacks.

His only interception, however, came at an inopportune time after the Centre defense forced a three-and-out following the Colonels’ fourth-quarter score.

Hayes completed five straight passes and seven of nine as the Colonels drove from their own 35 to the Berry 8, but he was intercepted in the end zone by Berry’s Jordan Arnett with 7:46 remaining.

“Devin, I know, understands that he got us here, and he’s got nothing to be ashamed of,” Frye said.

Centre never threatened to score again. The Colonels took over at the Berry 49 on their next series, but two sacks pushed them back 18 yards and they were forced to punt. They got the ball back one last time at their own 22 with just 32 seconds left after a missed field goal attempt, but four straight incompletions finished them off.

Centre lost the battle between the SAA’s highest-scoring offense and its stingiest defense. Centre was averaging 45.2 points per game, and Berry was allowing just 20.3 per game.

The Colonels’ defense did its job, however, holding the Vikings well below their averages of 31.2 points and 421 yards per game.

Centre defenders sacked Berry quarterbacks five times. Defensive end Trey Yeager, a Boyle County graduate, led the way in his final game for the Colonels with two sacks among his eight solo tackles and nine total tackles, both team highs. He also tipped the pass that Lewellyn intercepted late in the first half.

Centre drove 95 yards in 16 plays for its first score, taking advantage of Berry penalties totaling 42 yards to break a scoreless tie less than two minutes into the second quarter.

The Colonels netted 73 yards in 15 plays on their next series, which ended in Logsdon’s first field goal.

Frye said he believes this loss will motivate the returning Colonels as they work toward next season.