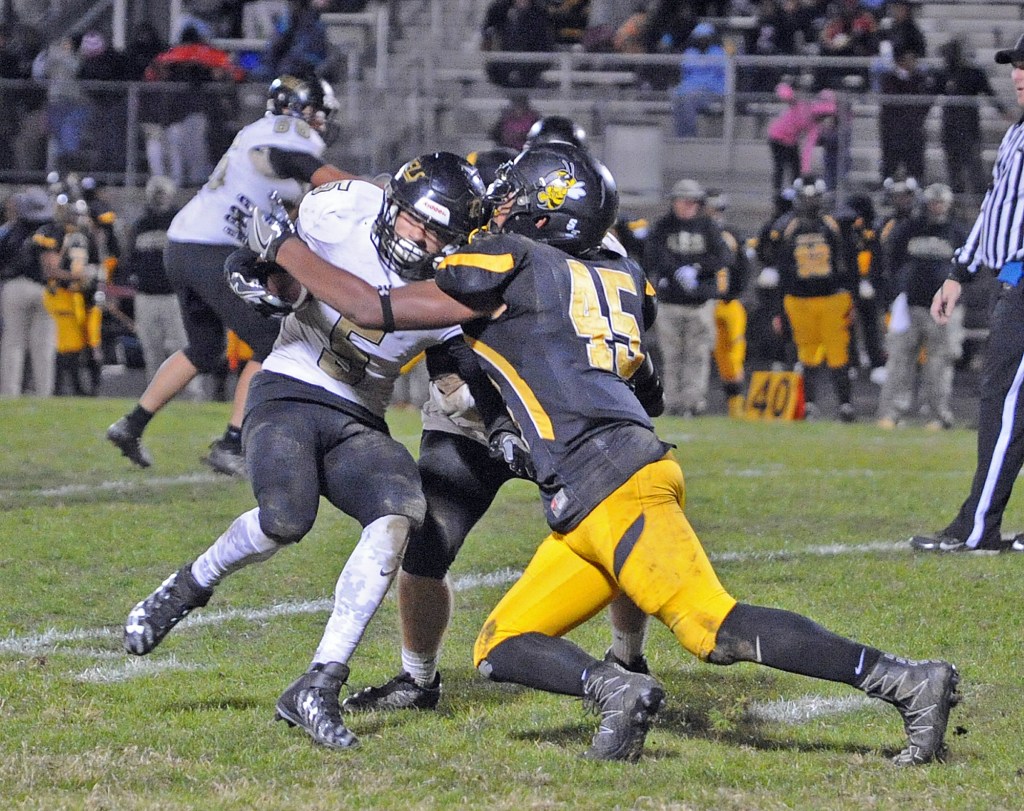 LOUISVILLE — Boyle County’s first play from scrimmage Friday set the tone for what would be a challenging night for the Rebels’ offense in a 37-6 loss to Central in the Class 3A football playoffs.

A high snap couldn’t be controlled by quarterback Sam Tiller and it was picked up and ran into the end zone by Luke Bowman. After eight seconds of game time, Central led 7-0.

Boyle’s next two drives lasted just four plays: A three and out followed by a fumble on the first play of the third drive. Central’s Sebastian Francisco hit a 42-yard field goal to give the Yellow Jackets a 10-0 lead midway through the first quarter.

The Yellow Jackets’ second touchdown came in the second quarter after another Boyle fumble, recovered on the Rebels’ 14 yard line.

“We just started off with that fumble, scoop and score for a touchdown and just got us back and behind so fast and so quick,” Boyle coach Chuck Smith said. “Their other score came fast as well. You can’t do that against a good team and expect to beat them. We got behind so quick, then after that we started losing our confidence, I think.”

Central’s offense started in Boyle territory on four of its first five possessions. Central led 10-0 after one quarter and 17-0 at halftime, even though the Rebels’ offense outgained its opponent 106-85 in the first half.

The Rebels’ defense answered the call, slowing Central’s offense in the first half despite such a short field behind them.

Boyle had a chance to put a score on the board right before halftime. Freshman quarterback Reed Lanter entered the game and hit Reese Smith on a deep pass to put the Rebels into Central territory, but the drive stalled when Boyle couldn’t convert on fourth and one with under 30 seconds to play in the half.

In the second half, Tiller returned at quarterback for Boyle.

“When Sam gets shook, he doesn’t shake it fast enough,” coach Smith said. “We put Reed in there so Sam would have an opportunity to regain his composure. And he did, he came back out and played pretty good.”

Central opened the second half with its longest drive of the game, starting on its own 27 yard line and finishing with Corey Johnson’s second rushing touchdown of the game.

Tiller threw an interception on fourth and long five minutes into the second half, with Central taking over on its own 17. The Boyle defense held strong the rest of the quarter, but Boyle’s offense continued to struggle to make any ground. Entering the fourth quarter, Central led 24-0.

Coach Smith said his team lacked the will to come back after such a poor start to the game.

“I think we go in with the attitude that we feel like we have to play a perfect game to win, and that’s impossible to do,” he said. “Once it starts going wrong, it’s happened a couple times this year, when it starts going wrong we just drop our heads and feel sorry for ourselves instead of fighting back like a true Boyle County football team would.”

Boyle put together a strong drive to start the fourth quarter, but Tiller was intercepted on the goal line. The Yellow Jackets returned the pick for a touchdown, but it was called back due to a block in the back.

Boyle’s defense recovered a fumble with 9:22 left in the game, and the offense finally responded. Tiller threw a 21-yard touchdown pass to Evan Tarter to give the Rebels life. The two-point conversion attempt was incomplete, and Boyle trailed 24-6. Tarter finished the game with two catches for 26 yards and a score. He also had three kick returns for 52 yards.

“I think Evan Tarter did a really good job, he worked his heart out,” coach Smith said.

Any momentum Boyle felt after that drive was squashed on Central’s next drive, when Johnson hit paydirt for the third time via a 56-yard score.

Johnson scored again from three yards out with 3:53 remaining, giving Central a 37-6 victory.

Coach Smith said there were players like Tarter who stood out, but not nearly enough in a tough playoff game.

“I think Reese Smith did a great job, Landen (Bartleson)as well,” the coach said. “That freshman core did a good job. Wilson Kelly stood out on defense. Not enough, is what it is. We’ve got to have a whole team playing like that, and we obviously didn’t. It’s not Boyle County football. I know we’re young, I know we’re inexperienced, I know all that, but tonight wasn’t Boyle County football, and to me, that’s disappointing.”

“It’s great experience. We’ve got a lot of guys coming back, returning starters coming back,” he said. “But what we’ve got to do is come back bigger, stronger, with a nastier attitude and hopefully we’ll be able to do that and right this ship. Boyle County needs to be playing for a state championship. That’s what I think, that’s what I believe and that’s my intention and my goal.”