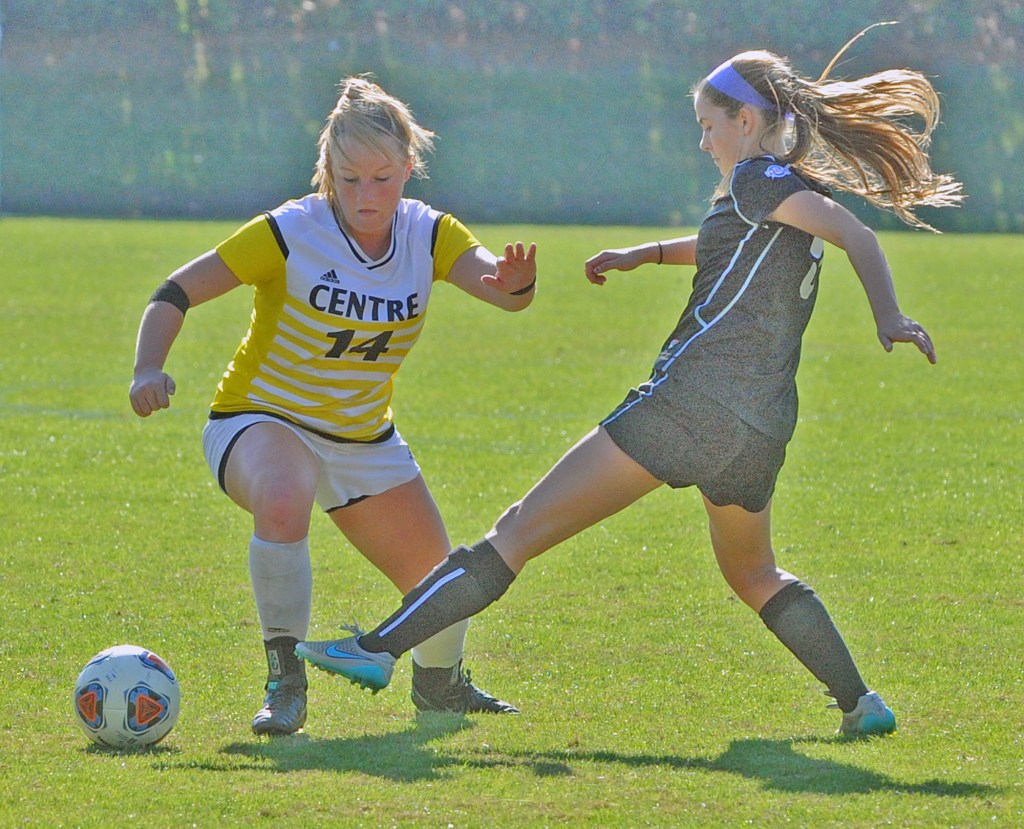 By Matt Overing/matthew.overing@amnews.com Centre midfielder Amy Dean makes her way around a Hardin-Simmons defender during the first half of Sunday's second-round game.

Two top-15 teams battling it out in the second round of the NCAA Division III tournament lived up to the hype.

No. 13 Centre College and No. 9 Hardin-Simmons exchanged 26 shots at goal in the first and second half, but both keepers were up to the task. Two periods of extra time weren’t enough, and Hardin-Simmons squeaked out a victory, winning 4-3 on penalty kicks Sunday at Hillside Field.

Hardin-Simmons jumped out to an early advantage, earning seven corner kicks in the first 45 minutes. Centre had two goal-line clearances and a stellar one-on-one save by Olivia Alford denied the Cowgirls a lead in the first half.

Senior forward and leading scorer Destinie Graves started the first half after missing Saturday’s first-round matchup but struggled to find an opening in the Hardin-Simmons defense.

Things picked up for the Colonels in the second half, with Centre seeing more of the ball and creating more openings in the final third.

Hoffman said he asked his entire team — particularly his center-backs — to play more positive soccer in the second half.

But despite seven shots and four corners in the second half, Centre still couldn’t find the back of the net. The game went into golden-goal overtime with neither team on the score sheet.

“I told them going into PKs and going into overtime, I just pulled them in, let them know how proud I am of this team and this program,” Hoffman said. “Everything we live by is all heart, and that second half was one heck of a half that we put together. I just told them to go out and have fun, try to win it outright.”

The teams combined for five shots in 20 minutes of overtime, but only one shot was on target. The two teams went into penalty kicks. Centre missed two of its first three attempts, and Hardin-Simmons connected on four of five to win.

“Thank you. Those two words aren’t said enough,” Hoffman said. “But what a group, they’re very, very special, and hopefully they realize the impact that they left on this program.”