Looking back: Electricity comes to Boyle County in 1930s 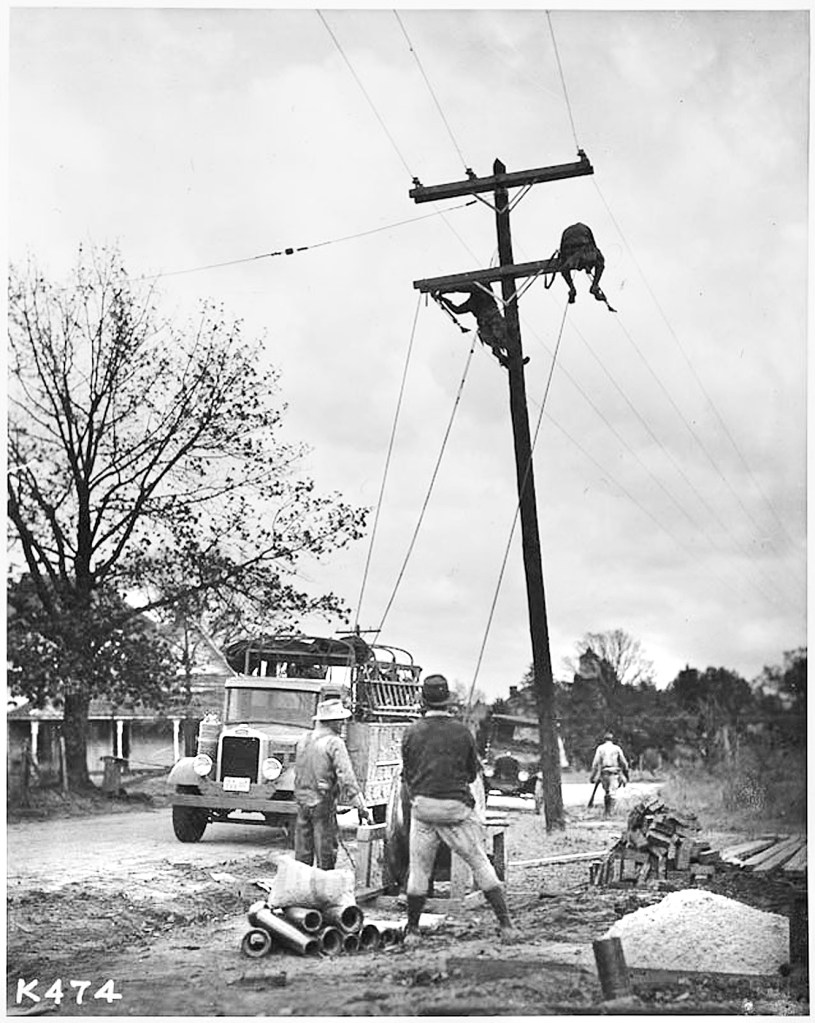 #2 Utility poles are being installed in an undisclosed area of Boyle County.

(Editor’s note: This is the first part of a two-part series of articles about Inter-County Energy. Mike Denis, local historian, provided information for this article taken from research by Jim Jacobus, president of Inter-County Energy in Danville; Richard C. Brown’s history of Danville Boyle County; Forkland community history; and The Kentucky Advocate.)

Farmers in the rural areas of Boyle and surrounding counties did not have electricity until the late 1930s while city folks had electricity, running water and telephones.

Only 3 percent of farms in Kentucky had power compared to 10 percent nationwide because private electric companies did not find it profitable to run lines in rural areas.

However, that changed in 1935 when President Roosevelt issued an executive order setting up the Rural Electrification Administration.

Boyle County Farm Bureau was the leader of the movement for rural electrification in the mid-30s in this area. 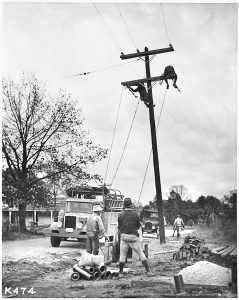 Utility poles are being installed in an undisclosed area of Boyle County.

The local Farm Bureau discussed extending power lines to the farmers in August 1935 and it was a topic of the state Farm Bureau at its state convention in January 1936.

Later that year, Congress passed the Rural Electrification Act to set up a system to lend money to cooperatives to build power lines into the rural areas.

Planning began immediately on how the extension would become a reality.

Farmers were surveyed by the Farm Bureau and meetings were held in Perryville and other communities to discuss an idea of a farmer’s cooperative.

In January 1937, new legislation was proposed in Frankfort that would allow the creation of cooperatives. 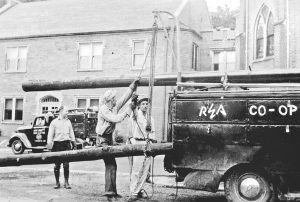 Linemen with REA load a utility poles on a truck to place for electricity in rural Boyle County.

In March, more than 300 people plus representatives from Marion, Casey, Lincoln, Garrard, Washington and Mercer counties attended a meeting in Perryville to talk about the project.

A banner headline in the Kentucky Advocate reported April 3, 1937, that 379 farmers in Boyle County wanted electricity.

An application was made with the REA headquarters in Washington, D.C, and work began.

Areas were mapped out where lines and poles would go; arrangements were made to buy electricity wholesale from existing utility companies.

An application from Garrard and Marion counties arrived in Washington at the same time. The three projects were combined. 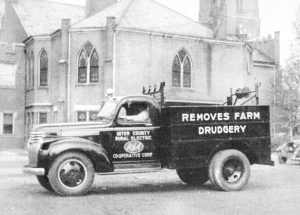 An early Inter-County Rural Electric Cooperative Corp. truck advertises what it does for farmers.

The first office was on the second floor of the Federal Building in Danville, and later moved to 145 North Fourth St., then 467 W. Walnut St. The offices moved again to 420 Main St, and now is located on Hustonville Road in a new facility built in 2005.

Currently, Inter-County has more than 65 employees and 26,000 members.

It started out with eight employees for the first 500 members.