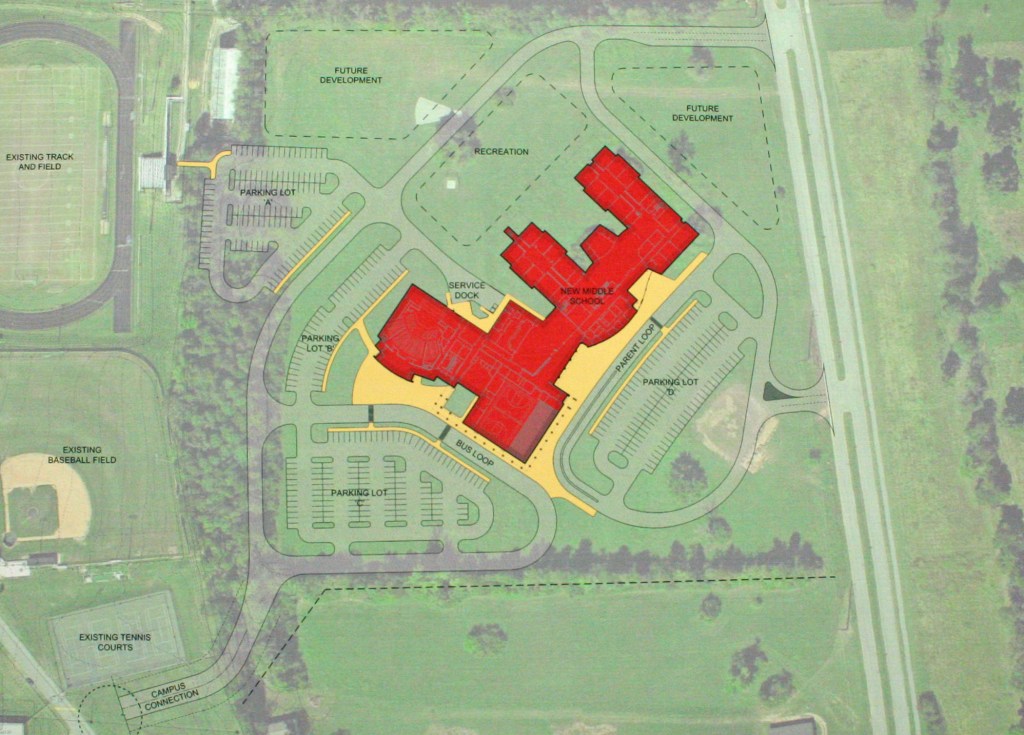 A map of the new Boyle County Middle School, slated to open during winter term of the 2018-2019 school year.

A band room, a media center, collaboration spaces and a performing arts center are just a few of the spaces planned for the new Boyle County Middle School.

But before the plans move forward, the district wants to give teachers and the community another chance to voice their opinions on what should be in the future building, with a community hearing at 7 p.m. Tuesday at the current Boyle County Middle School.

“We want the community to think through it and give us feedback,” Superintendent Mike LaFavers said.

On Monday, LaFavers and others will meet with all of the faculty at the middle school to review and hear more about what they would like to see. Then community opinions will be gathered at the Tuesday hearing. After that, the plans will be presented to the Boyle County Board of Education on Thursday, when board members will decide if it’s time for the architects to move to the “schematic phase.”

“We are not at the schematic phase yet,” LaFavers said. “We have two more steps, important steps: the entire faculty and back to the community.”

If they’re not on the right track, the plan will be worked on more, LaFavers said. It’s already been reviewed by a sea of people.

“There have been a lot who had their voices heard already. Lots of hours — hundreds of hours — put in,” LaFavers said.

Those voices include middle school students, elementary students, some middle school faculty and others. LaFavers and members of the district’s High Impact Team, which have helped work on plans for the building, have visited schools across the country for ideas, including Intrinsic Schools in Chicago, where the idea for collaborative spaces came from.

LaFavers said those spaces, which allow for teachers from various disciplines to bring their classes together, are something schools seem to be shifting toward. There are other spaces built as traditional classrooms, but could become collaborative spaces easily in the future if that’s what the school needs. Also, collaborative spaces could easily become classrooms.

The collaborative spaces are more comfortable than a structured classroom setting, featuring soft chairs and spaces for group work.

So far, the excitement has been mounting across the district, said Chris Holderman, assistant superintendent and director of pupil personnel.

“The community, the staff, the kids — every one has been excited. It’s been really authentic responses,” said.

Currently, the new Boyle County Middle School is still slated to open during winter break of the 2018-19 school year. After that, the district plans to return the current middle school to its original purpose — serving as Woodlawn Elementary School.

Plans for the current Woodlawn Elementary School building have not been determined, although it could become home to the district’s central office.