LANCASTER — The executive director of the Lancaster Grand Theatre says the community should expect a sparkling array of nationally known entertainers to mark its fourth season.

“Our venue, first opened in 1925, provides the ideal setting for headline attractions ranging from popular concerts to Broadway hits,” Debbie Hoskins says. “We’re thrilled to announce our outstanding lineup following our rebirth as Central Kentucky’s home to world-class entertainment in our historical venue.”

Only four years in operation, after being closed for 50 years and undergoing a 4.2 million restoration, the theater is pulling in top performers from around the world. “A theatre presenting programming as we have now scheduled is usually only found in much larger cities. The intimacy of a historical venue like the Lancaster Grand makes it an ideal setting for all performances. It has become a destination for the arts and entertainment in Kentucky.”

And to add to the small-town appeal surrounding this venue, season dinners are served before each performances at 6:15 p.m., with menus posted online. “It’s the complete experience,” Hoskins says. “It’s convenient for patrons to  park at the theatre, have dinner and see the performance.  The Cattlemen’s Association prepares the beef for most performances, and dinners are affordably priced at $25 per person.”

The Lancaster Grand offers varying subscription options.  All performances are available on an Everything Package, which includes a 15 percent discount, or a Select Seven Package, offering a 10 percent discount. There will also be a discount of 10 percent if 10 or more tickets are ordered for special events.  Single tickets may be purchased at any time. Every option allows subscribers complete flexibility when selecting season ticket subscriptions and allows for early seat selections.

Russell Moore and IIIrd Time Out 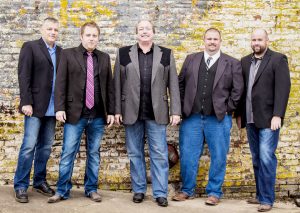 While many bands have come and gone, Russell Moore & IIIrd Tyme Out have endured.  This talented group has managed to climb to the top not just once, but twice – winning a slew of International Bluegrass Musical Association vocal awards along the way.  This included two Male Vocalist of the Year honors in first the mid and then the late 1990’s, plus Moore persevered to capture the Male Vocalist of the Year trophy for three additional years.  A whole new generation of fans has emerged during this period, and the quintet is posed to again deliver their distinctive music with the release of “Timeless Hits From the Past. . . BLUEGRASSED,”  contracted by Cracker Barrel Old Country Store,  along with a new self-produced album, “It’s About Time.”  The group has raised the bar again with these new recordings! Tickets: $15-$30. 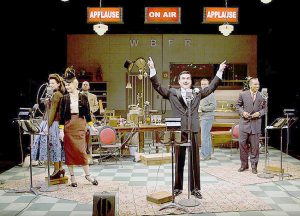 Join the citizens of Bedford Falls in this traditional live radio broadcast style show. This “play within a play” is complete with commercials, jingles, live sound effects, George and Mary Bailey, Mr. Potter and all the characters we have grown to love in this Frank Capra classic tale. Five veteran Broadway actors, supported by a sound-effects man, deliver the lines of all the characters from the movie.  Four are dressed in fashions suggesting that their characters live in the golden age of radio, almost certainly the 1940s.  The fifth appears to be a 21st century guy who has wandered into a dusty, deserted old radio studio and see the others as ghosts.  In short order, though, he is interacting with them.  In fact, he finds himself cast in the role of George Bailey, originally played by Jimmy Stewart. Tickets: $20-$35.

The Lancaster Grand Theatre will exhibit a live nativity scene on its grounds featuring local citizens representing the infant Jesus, Mary and Joseph.  Angels, The Three Wise Men, shepherds and an assortment of live animals will be present at this live nativity scene as described in the Gospels of Luke. Free to the public, and open from 7-9 p.m. on two consecutive weekend evenings.

Grand Festival of Trees Inside Theatre

This joyful example of community creativity will be on display on holiday dates as listed and is open to the public and free of charge.  The Lancaster Grand Theatre will be showcasing up to a dozen carefully crafted and uniquely decorated Christmas trees decked out by individuals, nonprofit organizations and businesses in the Garrard County area.  Prizes will be awarded and a silent auction for the trees and other holiday gifts will be held.  Bring a dollar and vote for your favorite decorated tree. 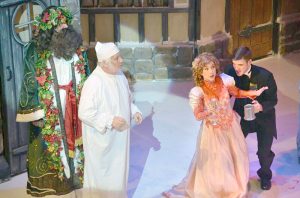 A powerful story of redemption, Charles Dickens’s A Christmas Carol, has enchanted audiences the world over with its simple message of selfless giving. Ebenezer Scrooge, a most unrepentant, miserly fellow, is made to see the light as he survives a merciless battery of revelations by the ghosts of his own Christmases: Past, Present, and Future.

This fully staged musical adaption of Dicken’s work comes direct from the Palace Theatre, selected in 2012 as Outstanding Historic Theatre by the League of Historic American Theatres.  This timeless classic is filled with lush costumes, stunning sets, music, and dance featuring veteran Broadway actors. With beloved traditional carols of the season included, A Christmas Carol is an enchanting way to begin the holiday festivities.  The performance has become an annual tradition at the Lancaster Grand Theatre. Tickets: $30-$50. 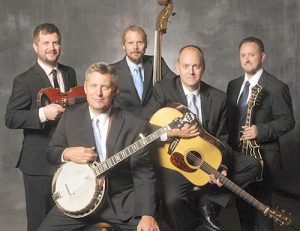 The Gibson Brothers are still at the pinnacle of bluegrass music, bringing their unique northern musical interpretation of bluegrass to audiences from coast to coast and earning praise from critics and fans alike.  As stated by bluegrass legend Del McCoury:  “When I hear the Gibson Brothers, I know it’s them from the first note.  They have that little thing in their voices that no one else has.” Tickets: $15 – $30.

For over two decades, the unforgettable caricature of veteran comedian James Gregory has stood grinning: His shirt untucked, his arms outstretched, a carefree welcome to a down-home, hilarious comedy experience. It’s storytelling at its best. The trademark caricature is the essence of James Gregory’s comedy: rib-tickling reflections on life from the front porch. The James Gregory show turns the clock back to a time when life was simpler —  to a better time, before the death of common sense.  It was a time when people sat on the front porch and actually talked to each other without a cell phone in their ear. Gregory’s success, like his comedy, is the direct result of the values he grew up with. And now, twenty something years later, it is this unique brand of humor that packs the crowds into his sold-out shows. The absence of vulgarity sets James apart and his stories are carefully crafted art. “I have lived long enough to know people, know life,” Gregory reflects. “My comedy is based on my life experiences. It’s real, it’s funny and the audience loves it. That’s why I’m still in business.” And did we mention that he’s generally referred to as the “Funniest Man Alive?”  Tickets:$15-$30.

An Evening with Gallagher, The Jokes on You Comedy Tour with Special Guests Artie Fletcher & Bob Nelson

Sure, he’s the famous watermelon smasher. Yes, he literally invented the television stand-up comedy special.  Absolutely, 14 Showtime specials is a big deal.  And certainly 3,500 live shows to capacity crowds is worth mentioning. But how about that Gallagher is the reason they invented Comedy Central?  Or that before him no one ever had that level of interaction with a live audience?  Or that he was the No. 1 comedian in ticket sales and ratings for almost 15 years? Gallagher has led an extraordinary life, with an even more spectacular career.  His fan base is one of the most loyal thre is, and he rewards them every chance he gets.  Now on his farewell tour, he will do it one last time. Tickets: 25-$45.

The renown Glenn Miller Orchestra was formed in 1938 and became immensely popular, recording such big band chart successes as Moonlight Serenade, Pennsylvania 6-5000, In the Mood, Little Brown Jug, Tuxedo Junction, A String of Pearls, Chattanooga Choo Choo, At Last, (I’ve Got a Gal In) Kalamazoo, and many more.  During the 1940’s, in fact, Glenn Miller achieved more hit records than either Elvis or the Beatles attained in their era.  Hollywood contributed to the band’s popularity and that of its founder with the 1953 release of The Glenn Miller Story on the big screen.

The present Glenn Miller Orchestra was formed in 1956 and has been touring consistently since, playing an average of 300 live dates a year all around the world.  This 18-piece ensemble is coming to the Lancaster Grand Theatre to recreate the golden era of swing.  Join the fun and find yourself snapping and tapping to the classic music of a bygone era in a historic theatre.  “A band ought to have a sound all of its own.  It ought to have a personality” – Glenn Miller.  Tickets: $39-$45.

Shadows of the 60’s, A Tribute To Motown’s Super Groups

This dynamic show pays tribute to the tremendous legacy of The Four Tops, The Temptations, and The Supremes,along with music by Smokey Robinson, Marvin Gaye, Stevie Wonder, Gladys Knight, Martha Reeves, and Junior Walker.  Artists who performed with these Motown greats will perform the hits that span several decades.  Composed of extremely talented and experienced musicians and singers, they flawlessly perform Motown charts covering a forty year period of popular music that, for many of us, formed part of the tapestry of our lives.   And prepare to be “wowed” by stunning choreography and costumes! Tickets: $20-$35

Some Rock Band, Benefit Concert for the Lancaster Grand Theatre

This “History of Rock and Roll” as presented by Some Rock Band offers a musical demonstration of distinct eras in the evolution of rock and roll music.  There will be two sets of sampling songs from the 50’s, 60’s, 70’s and 80’s, featuring songs by Elvis Presley, The Beach Boys, The Beatles, Rolling Stones, Credence Clearwater Revival, Jimi Hendrix, The Eagles, Elton John, Steppenwolf, Prince, Foreigner, Boston, Poison, Queen and AC/DC.This talented group of local musicians –  comprised of Garland Frederick, Tim Scott, and Steve Smith – offers a unique celebration of the music of our time!  Come to enjoy the performance and benefit the Lancaster Grand Theatre. Tickets: $12.

Foreigner is arguably one of the greatest bands in the history of rock music.  The music of this iconic band has been a part of our lives for over thirty years with such hits as I Want to Know What Love Is, Feels Like the First Time, Jukebox Hero, Hot Blooded and Cold as Ice.

Now you can experience the music as never before in this tribute show designed to deliver the experience of a live Foreigner performance so close to the original that you will be amazed!  Lead singer Matt Newton has a stunning ability to emulate the incredible vocals of Lou Gramm.  This is a powerful performance from the very first note of the show all the way to the last note of the final encore! Tickets: $10-$25.

Joe Mullins and The Radio Ramblers

Joe Mullins and the Radio Ramblers always put their distinction stamp on a song, making it at once their own and part of the chain of tradition that lies at the heart of true bluegrass music.  This group has been seen by thousands of fans across the continent, offering performances at a vast array of venues including the National Folk Festival, Bluegrass Underground, Bluegrass Nights at the Ryman, and regular guest appearances on the Grand Ole Opry.

Mullins is a favorite broadcaster in bluegrass, having been on radio in the Midwest  for over thirty years.  He hosts “Front Porch Fellowship,” which is syndicated on air each week in 30 states and Canada,  and sent to nearly 200 radio stations and thousands of internet listeners. Tickets: $15-$30.