Revenge on the menu for region finals 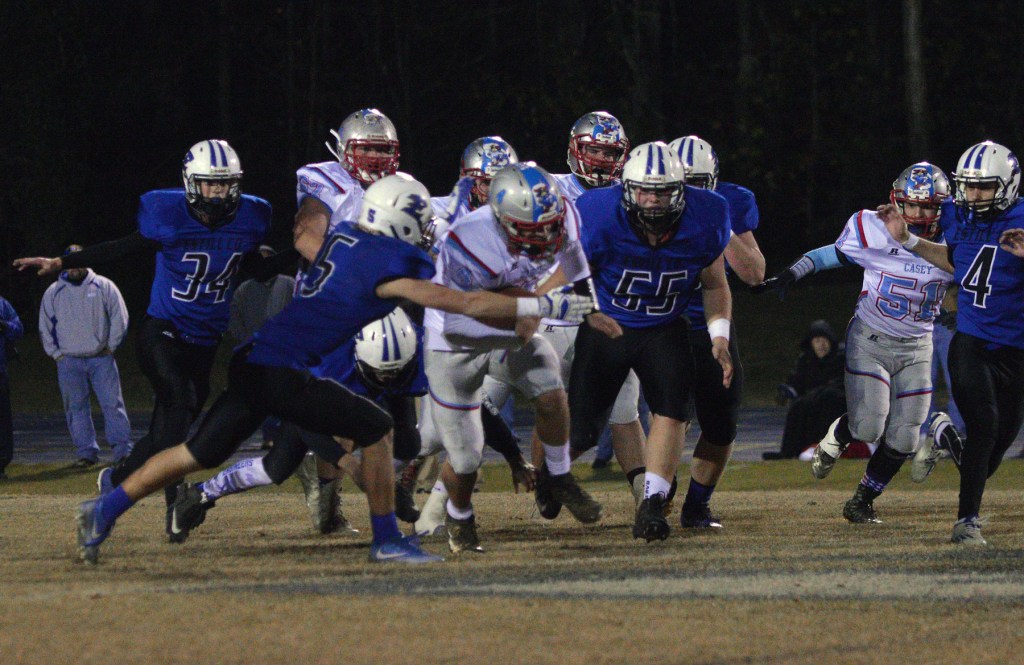 As if playing in this week’s region final weren’t enough, the games bring rematches for all three area teams still alive in the high school football playoffs.

The first time around, the area teams were on the short end of the scoreboard — Casey County lost to Corbin, Danville fell to Lexington Christian, and Mercer County lost to Wayne County.

For the Rebels, coach Steve Stonebraker laid it out to his players immediately after their 35-7 loss to the Redhounds — sure, that loss stung, but get back to work and a rematch was likely in the region finals.

And now here they are. For Casey senior quarterback Breece Hayes, though, a win over Corbin would mean so much more than just any other playoff victory.

“They beat us the first time, we’ll own up to that,” he said Friday after the Rebels beat Estill County 49-21 to advance. “They’re a good team and we feel like they do everything right, they don’t mess up. In order for us to be a powerhouse like we want to be — we want all these kids in the youth leagues under us, we want them to look up and be able to do this — we’ve got to go get this one. That’s the thing we’re chasing.”

For Danville, the game at Lexington Christian is a chance at redemption. In the first meeting, the Admirals led 26-7 before the Eagles rallied for a 42-40 win at Admiral Stadium.

“The first game was a great game, and we have to figure out how to score a couple more points than them. It should be a great game,” Ads coach Clay Clevenger said after beating Leslie County 34-10 last week.

A 47-23 loss at Wayne in Week 4 appears to be the turning point for the Titans — since then, they’ve gone 6-1 and outscored opponents 228-140. Last week, Mercer nailed its most thrilling win of the season, a 31-30 win at Rockcastle County secured when senior linebacker Grayson Blevins stonewalled a Rockets two-point conversion in overtime.

“I’ve never been a part of a state championship, and I’d love that — but … I want to get to be a football coach one more week,” Mercer coach David Buchanan said after Friday’s win, “and I think the kids are like that, they want another week to be a football player.”

ANOTHER LINE IN THE STORY

Casey County keeps making history this season. The Rebels have now won a school-record 10 games and Friday’s matchup at Corbin is their first appearance in the region final.

After the win over Estill County last Friday, senior Breece Hayes said the Rebels aren’t concerned with history, instead looking forward to more.

In the 49-21 win over Estill, the Rebels had a school-record seven players score touchdowns. And the 241 rushing yards, led by Preston Tucker’s 104 yards, was a season high for Casey.

Heading into this season, the story surrounding Boyle County wasn’t so much who was back but who was gone. The Rebels had lost arguably more talent than any other team in the area, and now the keys to the kingdom was turned over to a largely inexperienced cast.

It started out rough — losses to Lafayette, Danville and North Hardin kicked off the season — but Boyle rebounded for six wins in its last seven games. Along the way, star underclassmen starting showing their talents, players like Tanner Crawford and Reese Smith.

This season ended much sooner than anyone associated with the Boyle program wanted, but next year’s story has already started being written with the wealth of talent the Rebels have returning to the fold.