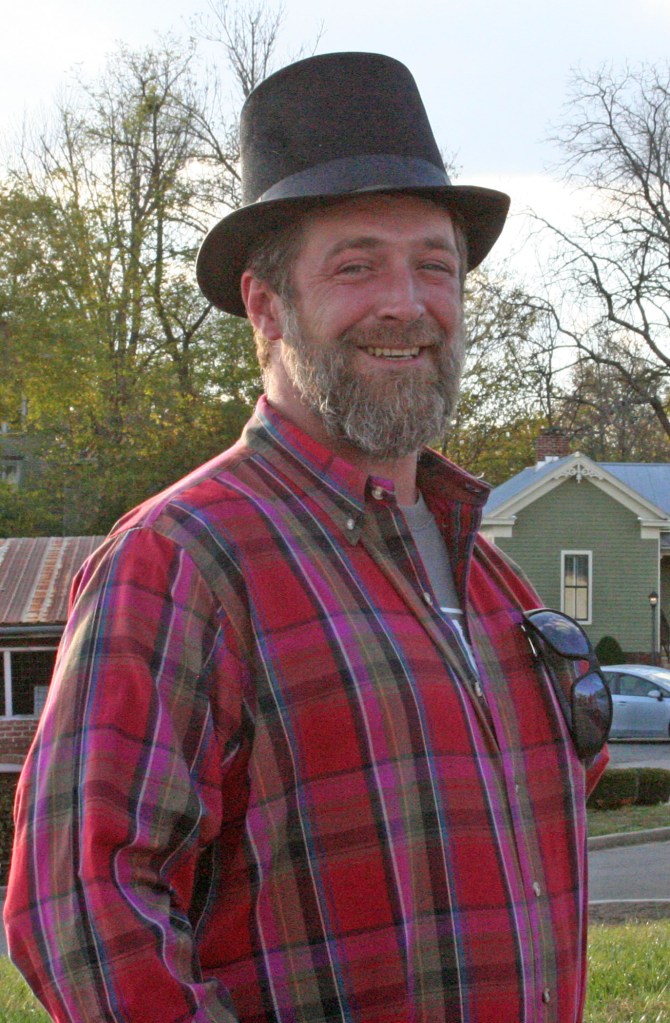 Kendra Peek/kendra.peek@amnews.com Mike Roberts of Lincoln County works as a chimney sweep, sporting a top hat he keeps in his work van because "everyone asks if you have one." He also spends time as a bell ringer for the Salvation Army, as a way of giving back to the community.

Chimney sweeping is a dirty job, rivaling one you’d find Mike Rowe trying out, but it’s one that Lincoln resident Mike Roberts does with a smile on his face.

“I love sweeping chimneys,” he said.

It was through a TV episode of Dirty Jobs with Mike Rowe that Roberts found out about training he could take. He had been doing some of that type of work with his father-in-law and decided to leap in.

He found a career he loved.

“I love sweeping chimneys. I meet the best people. I get the best view — there’s nothing like the view from the top of a town, the top of a mountain sometimes. Lots of fresh air and lovely people. I get to go around, spreading my luck,” he said. “They say chimney sweeps are lucky by nature. I just like to spread it around a little bit.”

And, he said, it’s pretty important work, too.

“This business is all about being able to sleep at night, knowing that the safety of families, isn’t necessarily in your hands, but you’re an advocate for that family, for that chimney. You’re the one that’s telling them, ‘Please don’t start a fire in this,’ or ‘You’re good to go.’ We try to be very thorough because I like sleep,” Roberts said.

The process has modernized quite a bit, Roberts said, now using a vacuum process to help clean up the buildup and by using a motorized “rotary” sweep.

“It’s fantastic. It does 100 times better than the traditional. It’s a newer and better way,” he said. They also use a camera to inspect the chimney.

For anyone looking to hire a chimney sweeper, Roberts said, they should visit csia.org, the website for the Chimney Safety Institute of America, where sweepers, dryer exhaust technicians, and more can be found by searching near your location. Roberts is a certified chimney sweep and has taken classes through the National Chimney Sweep Training School

He said it’s a good idea to call someone before buying a house.

“Ninety-five percent of the chimneys I see need something to be brought up to code. Having that knowledge can save you anywhere from $5-$600 to $3-$4,000 on your home,” Roberts said. That’s a situation in which he might use a video camera to look into the chimney.

To Roberts, wood is king.

“I have never turned my electric heat on in my house,” he said. “To me, wood is king. To my clients, it is king.”

As there are so few who are certified, Roberts finds himself traveling around the region, and sometimes beyond, to answer the call, because he feels a bit of responsibility for all his clients and potential clients.

“I want the people who want to burn wood, to be able to do it and feel comfortable doing it,” he said. “The benefits have to outweigh the negatives. The money you can save, the heat that it provides. Cozying up next to your wood stove or fireside dinner? Nothing compares with wood.”

Not much compares with being in the woods, either, he said.

“If you ever want to be connected to God, that’s where he’s at,” Roberts said. He uses some of that time in the woods to pursue one of his many interests — mushroom hunting.

Roberts has familiarized himself with about 20 different types of mushrooms in the area that grow year-round and are safe to eat. Mostly, he just finds them for himself.

“I love it. I love spending time in the woods,” he said.

Although Roberts loves his business and his hobbies of mushroom hunting and fishing, among others, if he followed his true passion, it would be sculpting, he said.

“That’s my passion, but it doesn’t … I could show you 100,000 starving artists. The kids don’t deserve that. They deserve somebody that’s making some money,” Roberts said.

He stumbled into sculpting by accident.

“The next thing you know — well, not the next thing. About 16 years and $20,000 worth of tools and chasing stone all over the country … it’s hard to find, but I find enough to keep me happy.”

Although he hasn’t made it his career, Roberts said he still made it part of his life, because it’s a passion and “I’m big on chasing your dreams.”

One of the most important parts of his life, though, is his family.

Roberts had a “humble” childhood. The Cleveland-born man moved to Broughtentown when he was about nine years old.

“We lived in, basically, the ghetto outside of Cleveland,” he said. At nine, “we moved to the old family homestead in Broughtentown.”

There was no running water and no septic system, he said. It took a while, but they finally got the running water.

“We lived hard in those hills of Broughtontown. There was never a lot. There was always enough. There was a lot of love. And a lot of time to experience and enjoy our childhood,” Roberts said.

Although it was quite the culture shock then, he said there’s been no place like Lincoln County since.

“There’s only one place that’s been home. I love the place, I love the people. This is home,” Roberts said.

He had a bit of a “rough patch” in adulthood and his best friend passed away. Roberts had been asked to be the godfather to the man’s daughter, who was very sick as a baby.

“She was six months old when he passed. She was having seizures — at that point, the doctors had diagnosed it as acid reflux.”

Elizabeth, the young child, was having trouble doing things that normal six-month old babies were doing.

“She would eat and sleep, but she wouldn’t play. It was very difficult to watch, especially knowing that my best friend was gone, and this was his daughter,” Roberts said.

The man’s widow, Shawna, was battling her own illness, lupus, which frequently hospitalized her.

“It was really rough. I was there, I was able to be there,” he said. “When my best friend asked me, ‘Will you be the godfather to my child?’ I was completely honored.”

Roberts began caring for both, Elizabeth and Shawna, getting them to doctors and making sure they were getting the help they needed. Eventually, he and Shawna decided to get married.

And eventually, Elizabeth’s seizures stopped. But not before she had to have a left functional hemispherectomy.

Elizabeth is now 9, and requires a great deal of care. He and Shawna have since had two more children together, Evelyn, 6, and Aemon, 3, and both love their big sister.

Evelyn loves helping her dad farm, something they do for the family and nearby friends.

“My family wouldn’t eat that much in two years, so we share with the neighbors. It’s great for the kids to get out there, pick beans… my 3-year-old, he doesn’t really care for it yet. My 6-year-old, we’ll get out there, start singing songs about picking beans and the next thing you know, all the beans will be picked,” he said with a smile.

And they haven’t forgotten Elizabeth’s dad, with photos scattered around the house to keep his memory going, Roberts said.

“I miss him everyday,” Roberts said. Evelyn and Aemon know him only as their uncle.

Before Elizabeth, Roberts said he was a “roughneck,” until he had “purpose.”

“It’s easy to go through life blind, without vision or focus until another person gives you that focus,” he said. “I’m not even going to say another person. After everything I’ve been through or seen … belief in God and the way he works. I can really feel God’s hands guiding me exactly where I need to be.”

“I’ve seen a lot, been through a lot. I know that there’s a tomorrow. And if there’s not, I know where I’ll be headed,” he said.

It was all of this that led him to another great passion about eight years ago — the Salvation Army.

“I felt extremely blessed with everything I have, with the love that I found in my family, with the relationship that I found with my creator in this point. I had to give some back,” Roberts said.

He had shopped at the Thrift Store a few times and saw a sign seeking bell ringers. Roberts said he thought, “It’s time,” and he signed up.

“I’ve been able forge great relationships with all of those people down there and greatly respect what they do. The Salvation Army, and places of that nature, they concentrate on the common needs. You’re going to go in there and you’re going to feel love,” he said.

Quoting an old motto of the Salvation Army, “Soup, Soap and Salvation,” Roberts said he liked how the organization cares for all of a person and a community.

“You put money in the bucket, it goes to people in need here locally. You can see your work physically,” he said.

Roberts said he loves being able to do something that he knows benefits others, even if he isn’t able to financially help.

“Having them as an avenue for me to give back, it makes it invaluable to me. Regardless of what happens, I’m never going to have a lot of money. But because of my flexibility, I’ve always got some time. Giving back is easy. It’s the most selfishly, unselfish thing you can do.”

There will be a kickoff for this year’s bell ringing season from 11 a.m. to 1 p.m. on Monday, Nov. 21 at Kroger. The Salvation Army Band will be there along with WHIR.

Ringers in Danville will be located at the Kroger and the Hobby Lobby, but will begin ringing at Walmart after Black Friday, and will ring everyday but Sundays.