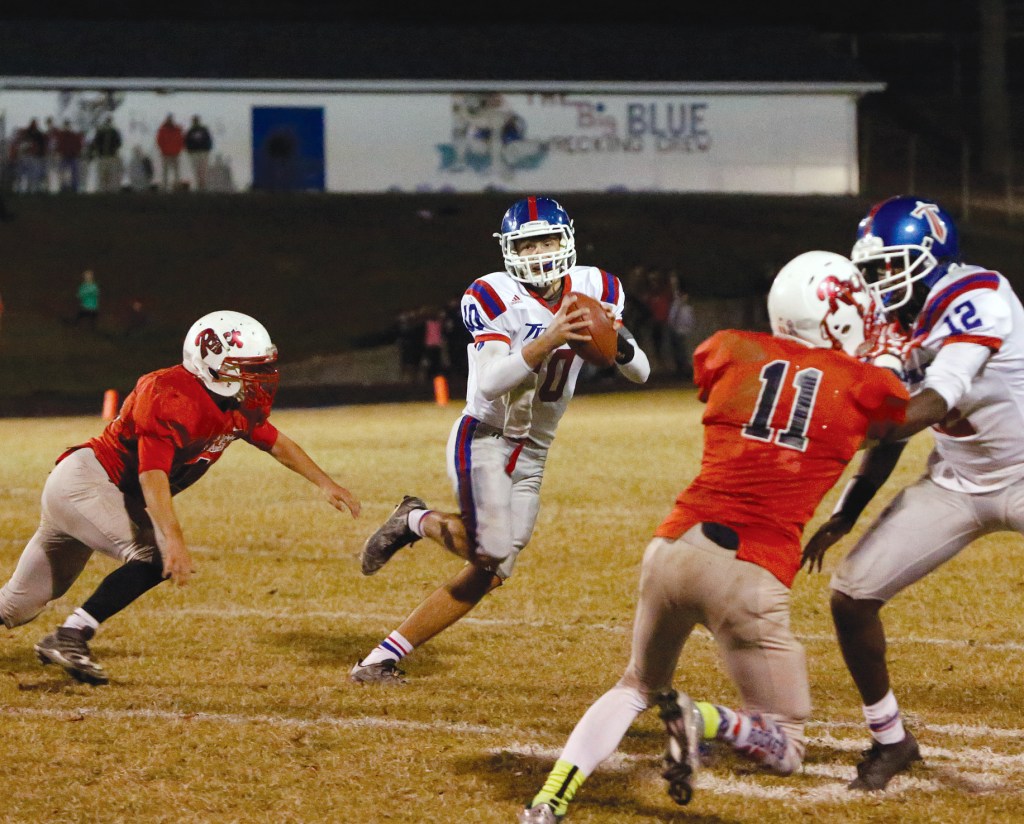 Nearly eight weeks ago, Mercer County made the long bus ride back from a 47-23 loss at the hands of Wayne County. The loss dropped the Titans to 2-3 heading into district play.

Since then, they’ve gone 6-1 and according to coach David Buchanan, they do not resemble the team from two months ago. Mercer will get a chance at revenge when it plays at Wayne County in a Class 4A region final at 7:30 p.m. Friday.

“It’s not even close,” Buchanan said. “Our new guys are a lot more comfortable. We’ve got Aubrey Jones back, which means Colin Miracle can play on the defensive front. We’re just very, very different right now because for those two reasons — our new guys have grown up and we’ve got Aubrey back. All that stuff has helped us, made us a much better and different team.”

While the record has flipped since the loss to the Cardinals (10-2), Buchanan points to the second half of a 28-20 win over Taylor County as the turning point of the season. In two games following that win, Mercer beat George Rogers Clark and Knox Central by a combined 64-3.

“At that point, we were still trying to screw up and won anyways,” Buchanan said of the Taylor win. “We really did some bad things to lose that ball game and won anyways. I felt like after Taylor County, having the bye week and calming down, the first time we played like I really felt like we could play is the GRC game. Since then, I sort of felt like we’ve been OK, we’re who I thought we were.”

So even with that, the Titans entered the regular season finale in Winchester with a respectable 5-4 record, which speaks to the talent and ability of the players on the roster to win despite not performing up to their coach’s standards.

“We were talented and even though we were trying to screw it up, we were still talented enough in other areas that we were winning games,” Buchanan said. “Sometimes that’s a step in developing your program.”

This is the first time Mercer has played in a region final since 2013, when it lost to Lexington Catholic, a team it lost to earlier in that season, too. The Titans are looking for their first trip to a state semifinal since the 2006 state championship season.

The last time Mercer faced Wayne this year was Trevon Faulkner’s first action of the season. The junior has since set the field on fire at free safety, coming up with seven interceptions in eight games.

And recently, Faulkner has made his influence felt on offense — in two playoff games, he’s caught seven passes for 106 yards and three scores, including the eventual game-winner in last week’s 31-30 overtime victory at Rockcastle County.

“There’s a lot of similarity between playing basketball and free safety, and every day that stuff transfers more and more,” Buchanan said. “He just excels in space. He’s very good to go up and get the ball. He’s very good at anticipating where the ball is going. He keeps getting better and better.”

During the two playoff games, quarterback Gunnar Gillis has thrown for 358 yards with five touchdowns while completing 26-of-50 passes.

Paired on the outside with Tanner Robins and Aaron Johnson, Faulkner gives the Titans another legitimate weapon who can score from anywhere on the field.

“We can put Tanner, Trevon and Aaron on the field at the same time, and we can have Grayson (Blevins) and D (Smith) out there with them and Gunnar,” Buchanan said. “We’ve got several playmakers we can get on the field who can score.”

The Cardinals do as well. They average nearly 43 points and 350 yards per game. Running back Dalton Garner has rushed for 1,059 yards and 20 touchdowns. He rushed for 131 yards and two scores in the first meeting between Wayne and Mercer, averaging more than 10 yards per carry.

The Cardinals have dominated their competition this season, winning nine games by 17 points or more — including that win over Mercer. But from what Buchanan has seen of his team over the last three games, don’t count on that result meaning too much to a renewed Titans squad.