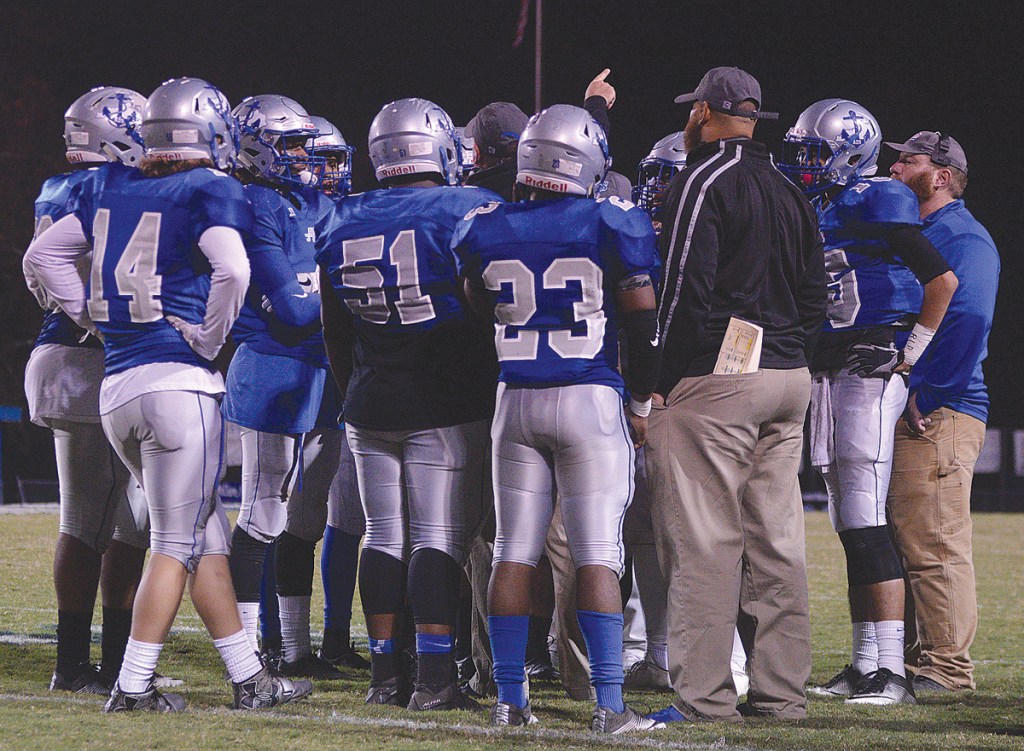 For the fourth time in two years, Danville and Lexington Christian will meet in a high stakes football game. And unlike the first two rematches, the Admirals will enter Friday’s Class 2A playoff game looking to right a loss suffered in the last game.

Four weeks ago, the Ads held a 26-7 lead on the Eagles in the first half before rallying for a 42-40 win at Admiral Stadium.

“We were in control of the game I thought. We were up 26-7 with the ball,” Ads coach Clay Clevenger said. “It just seemed like our body language wasn’t what it should have been, even at halftime with a two score lead. I can’t put my thumb on it, whether we got a little overconfident and just wanted to get it over with, I don’t know. Obviously, we didn’t do what we needed to do.”

In that game, Danville quarterback Zach Dampier threw for 310 yards and four touchdowns while completing 25-of-34 passes, but the running game stalled out with 80 yards — despite 124 yards and two scores from Donlevy Harris. That means there were negative 44 yards on the other rushes.

The Eagles totaled 501 yards, with running back Dillon Wheatley gashing the Ads for 249 yards and four TDs.

In the three games since that loss, the Ads have allowed 351 total yards, with only 213 coming on the ground.

During that span, Dampier has completed 48-of-66 passes for 663 yards and seven scores. And in those games, Dmauriae VanCleave has scored four TDs, including two punt returns covering 135 yards.

But it’s nothing the Eagles haven’t seen and aren’t expecting, just the Ads shouldn’t be fooled by too much LCA throws at them.

For LCA, that’s going to be a steady dose of Wheatley running the ball and Brayden Miller completing passes to a deep receiving corp. Wheatley has rushed for 1,631 yards and 26 TDs while Miller has thrown for 1,918 yards and 25 scores, completing scoring passes to eight different players.

The Eagles have been dominant at home this year, winning seven games by nearly 38 points per contest. In fact, the last time the Eagles lost at home was a 41-7 loss to the Ads in the 2015 regular season.

However, Clevenger isn’t worried about how his players will respond to the inhospitable road environment, feeling they perform better when the road trip can eliminate down time and distractions.

“There’s not as much time to sit around and think as when you’re at home,” he said. “You keep moving, doing a lot of things, getting on the bus riding up there and getting off, there’s a little bit more movement. Our guys seem to handle that better than sitting around and waiting on something.”

There shouldn’t much trouble for Clevenger to motivate his squad for this game — region final with a trip to the state semifinals on the line against a rival who got the better of them the last time out.

And that’s all this is about. Take away the postseason pressure and implications of what could come next week. The focus is all about LCA.

“Our kids kind of, to put it in their terms, low key have been looking to get back to this game after what happened last time,” Clevenger said. “We don’t talk about Bowling Green and state championships, we talk about the week at hand and the task.

“Our kids got humbled the last time we played, and they’re looking to see if they can change the outcome this time around.”