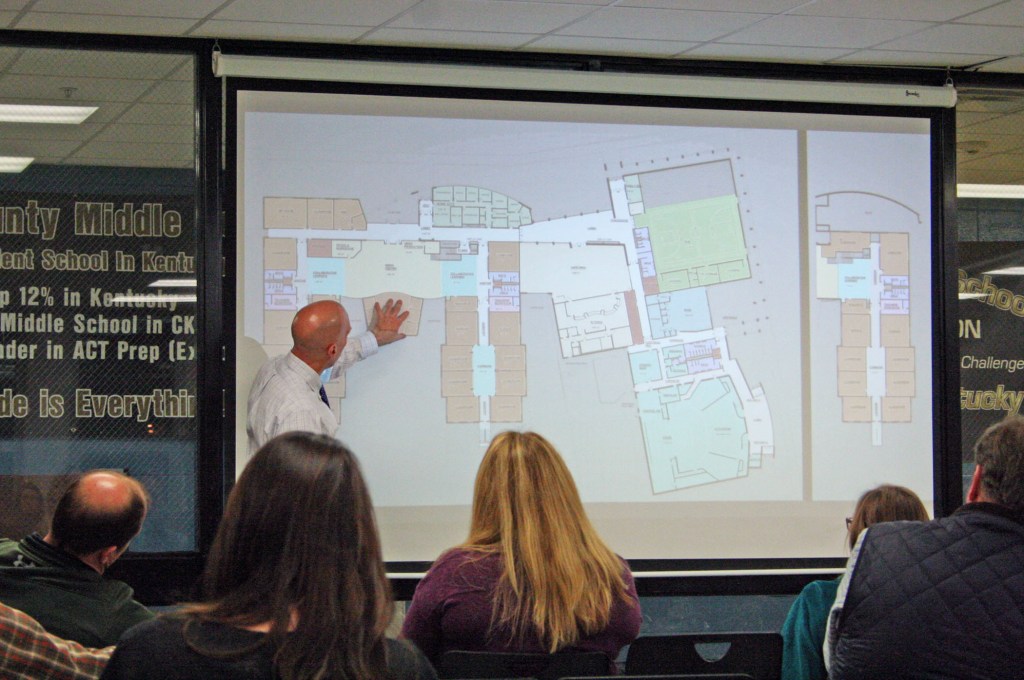 Kendra Peek/kendra.peek@amnews.com Boyle County Superintendent Mike LaFavers explains the functionality of the media center and collaboration spaces in the artist rendering of the new Boyle County Middle School, slated to open in the 2018-2019 school year.

About 50 people gathered at the Boyle County Middle School Tuesday night to hear more about the proposed plan for a new middle school. 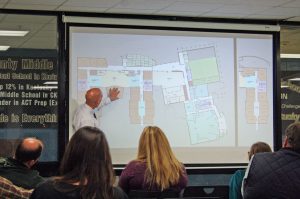 Kendra Peek/kendra.peek@amnews.com
Boyle County Superintendent Mike LaFavers explains the functionality of the media center and collaboration spaces in the artist rendering of the new Boyle County Middle School, slated to open in the 2018-2019 school year.

“We were looking for things that were different,” Superintendent Mike LaFavers said. “We tried to design a school that would last … at least 65 years. One of the big things we’re looking for is flexibility.”

Slated to open during the 2018-2019 school year, the school would include two Spanish classrooms, an art classroom, a computer lab, a full-size gymnasium with a capacity for 450 people, a media center, multiple collaborative spaces for co-teaching to happen, and a performing arts center that would be one of the biggest in the state.

The performing arts center would have to be approved my the Kentucky Department of Education before it is officially part of the plan; currently, it is an alternative in the plan.

The new school project could also include fixing and expanding the district’s tennis courts. 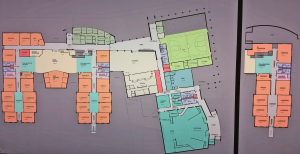 Kendra Peek/kendra.peek@amnews.com
The preliminary plan for the new Boyle County Middle School, which will likely see a few changes as the project progresses.

Attendees asked questions about the safety of students in the new middle school, including what would happen in the event of a lockdown. The solution is double doors that would close at the push of a button, securing the halls, with the exception of classrooms on the front exterior wall, including the art classroom, the Functional Mental Disability classroom and a Spanish classroom.

While LaFavers said it isn’t perfect, it did secure the majority of students.

“These rooms are hanging out there, much like every room in (the current middle school) is. We think through plans for lockdown. These spaces have to be thought through,” he said. “You’ll lock down 80 percent of the population, maybe 90. But not perfect. (It will) never be perfect — too much movement in the building to be a perfect plan.” 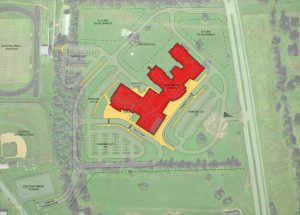 A map of the new Boyle County Middle School, slated to open during winter term of the 2018-2019 school year.

Officials plan to talk to architects about the possibility of adding another door in the hallway if building codes will allow it.

The plan carries an estimated $30 million price tag, which is subject to change.

Boyle County Middle School Teacher Rachael Seals spoke up during the meeting and said she was excited for the collaborative spaces.

“As a teacher, I am very excited to have the instructional space that has been designed. Right now, as a co-teacher, on a day-to-day basis, I am in the hallway. I have people walking by, distracting my kids. I do the best I can,” she said. “That is our number one goal — to teach your kids. This school, the new design, is going to allow every teacher to have a quiet instruction space. That is wonderful.”

Tuesday’s meeting was to let the district know if the plan was on the right track. The overall consensus, LaFavers said after the meeting, was that people seemed in favor of the plan.

“We’ve got a lot of people who care about education in general in our community and about the Boyle County Schools and those people were here tonight,” he said. 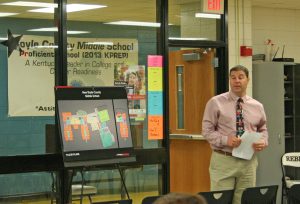 Kendra Peek/kendra.peek@amnews.com
Assistant Superintendent Chris Holderman opens the Boyle County Middle School forum, standing in front of a potential depiction of the interior of the new middle school in the cafeteria of the current school.

During Thursday night’s Boyle County Board of Education meeting, board members will have the opportunity to look at the plan. With their approval, the architects will begin to look deeper at the specifics for the interior of the building, speaking to the cafeteria workers about the cafeteria, the art teacher about the art classroom, the band director about the band room, and more specifics, LaFavers said.

There will be a Boyle County Board of Education meeting at 7 p.m. Thursday, which includes a decision on the plan proposed for the new middle school.