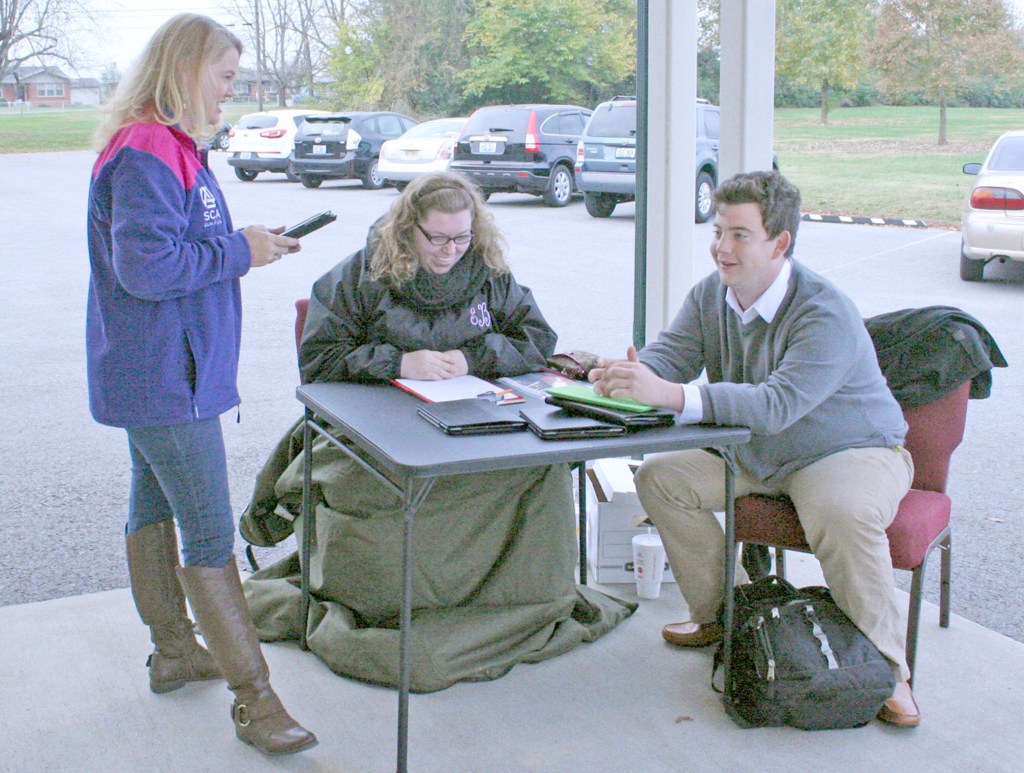 Kendra Peek/kendra.peek@amnews.com Jada Gaddis speaks with Centre College students Shelby Boyd and Jacob Cooper after casting her vote Nov. 8. Boyd and Cooper are part of the Intro to American Politics class at the college and were inviting voters to take anonymous exit surveys on iPads.

Boyle County voters generally think their community is heading in the right direction, but they view drug abuse as the biggest problem facing the area. That’s according to an exit poll conducted on Election Day by Centre College and Boyle County High School students.

It was the fifth time Centre professor Benjamin Knoll has coordinated an exit poll of Boyle County voters, and it was the first time that voters did not identify “jobs” as the most important problem that  local leaders need to solve.

Of those polled, 28.1 percent listed “prescription drug abuse” as the biggest problem, while 21.4 percent chose “jobs.”

“Crime” came in third at 11 percent; education was fourth at 10.4 percent; and economic development was fifth at 9.3 percent.

Knoll said the percentage of voters choosing “jobs” has declined from 38 percent to 21 since the exit polls began in 2011.

“That is likely due to the continuing effects of the economic recovery around the country,” Knoll said.

Drug abuse was listed as the most important issue by only about 10 percent of voters from 2011 through 2014. Then it increased to 17 percent last year before ballooning to 28 percent this year, Knoll said.

Purpose of the poll

“Public opinion polling is one of the primary tools that we have to understand what people think about social and political attitudes,” he said. “Students have the opportunity to learn how polling works from the inside out. That way, they can be more critical consumers of polling information that they encounter in the media.”

“This was an especially good opportunity for the AP Government students at Boyle County High School to partner with us to conduct this survey,” Knoll added. “We were grateful for their collaboration and could not have done it without them this year.”

Knoll said results from non-partisan questions about community issues and priorities are likely the most reliable this year, while partisan questions, especially about national and state politicians and issues, are least reliable.

Something that potentially skews the final results of the poll is what appears to be a lack of participation in the exit polls from Republican voters, Knoll said.

Knoll theorized that some Republicans — “but certainly not all or even a majority” — have a negative or skeptical view of polls and media in general.

“Thus, some may be more likely to simply ‘opt out’ than to participate because they don’t trust either the results or the method used to get the results,” Knoll said. “If this is true, it would help explain the pattern not only (with) our exit polling results, but also why the polls got this year’s presidential vote wrong.”

Because of the apparent lack of Republican participation, Knoll provided adjusted estimates on some questions in an effort to get closer to how Boyle County voters may really feel. The original results and adjusted estimates are both available from Knoll’s blog, www.informationknoll.com.

Knoll said a lack of participation from voters who do not trust polls may cause “a self-fulfilling prophecy.”

Voters on the pipeline

Voters were asked several questions about local issues, including whether they approve or disapprove “of the proposal to repurpose the Tennessee Gas Pipeline (which runs through Boyle County) from natural to liquid gas and reversing the direction of flow to north-to-south.”

Of those polled, 47.1 percent disapproved, 34.8 percent approved and 18.1 percent said they didn’t know or had no opinion. After adjusting for potential lack of participation, Knoll estimates the real split in Boyle County may be closer to 43.7 percent who disapprove and 38.2 percent who approve.

The pipeline proposal has been roundly rejected by elected officials and other community leaders, with every government and member of the Danville-Boyle County Economic Development Partnership passing resolutions formally opposing the plan.

Sarah Vahlkamp, co-chair of an informal steering committee organizing local efforts against the pipeline, said she was glad to see that the pipeline issue made it on the survey. But, she added, she sees an issue with accuracy in the phrasing of the question.

“The phrase ‘repurpose … from natural to liquid gas’ is not completely accurate. The Kinder Morgan proposal is to carry the hazardous natural gas liquids (NGLs), which is not the same as liquified natural gas,” she said. “… From the beginning of our awareness of the dangers of NGLs, there has been a confusion of terms. I think if the question had read ‘NGLs,’ it might have provided clearer results.”

“If one assumes that probably most people did not read that carefully and take the results at face value, then my interpretation would be that there are still many citizens out there not as well-informed as we had hoped in spite of all our efforts,” Vahlkamp continued. “So we shall continue to educate the public and emphasize the health and safety of Boyle County citizens.”

Knoll acknowledged on his blog that the wording had not been “100-percent accurate.”

“I appreciate the clarification being brought to my attention and regret the error,” he wrote.

Voters on the EDP

Voters were also asked how effective they think the partnership between Danville and the EDP is “at promoting jobs and economic growth in the area.”

EDP Communications Director Jennifer Kirchner issued a statement about the results: “We are pleased with the exit poll results showing 59.8 percent of Boyle County voters believe the partnership is effective. The economy is on a positive trajectory and that correlates with and enables us to advance development. The organizational strategy is one that encourages cooperation, reducing duplication of efforts and productively using our resources to further prosperity through sustainable development. We value our relationship with all the local governments of Boyle County, aim to be cooperative and seek compromise to further our collective goals for the common good.”

“Given that both major candidates had record unfavorable ratings this year, I would have thought that most voters would have been ‘holding their noses’ when they voted,” Knoll said. “… That challenges the narrative that no one liked their party’s choices this year.”

Knoll said continued strong support for where the local community is headed also stands out among the results.

“I’m glad to see that for the third year in a row, almost 80 percent of Boyle County voters see our community as ‘heading in the right direction,’” he said. “That speaks well to our community leaders and citizens.”

Do you believe Danville/Boyle County is heading in the right direction or heading off on the wrong track?

What is the single most important problem that our local area needs to solve?

Over the past year, do you believe that the local economy has …

Do you approve or disapprove of the proposal to repurpose the Tennessee Gas Pipeline?

What officials say on the pipeline

Danville Mayor Mike Perros: “I am not in favor of the pipeline proposal as it exists. I would be in favor if Kinder Morgan would replace the 74-year-old pipe that has been there with a new modern pipe that met the standards for today.”

Danville City Manager Ron Scott: “We have significant concerns about the safety of putting material through the pipeline that was not designed for high pressure that has greater volume in the existing pipeline. … I think it’s probably that we will attempt in the near future to schedule a meeting our U.S. Congressional Delegation and go to Washington, D.C. to personally express that opposition.”

How effective is the partnership between the City of Danville and the EDP organization at promoting jobs and economic growth?

What officials say about the EDP

Danville Mayor Mike Perros: “If one looks at our job expansion over the last seven years of EDP, I believe the conclusion could clearly be drawn that we should be doing quite a bit better. That is why the city has taken the leadership to bring in a strategic plan consultant. We look forward to working with them diligently over the next five months to get a plan to bring greater success in job creation.”

Danville City Manager Ron Scott: “I think we are becoming more effective in a team approach to working through some of the operational issues and planning issues to make it become more effective.”

Do you approve or disapprove of Danville City Commission’s handling of the following issues: