New middle school schematic approved by Boyle Board of Ed 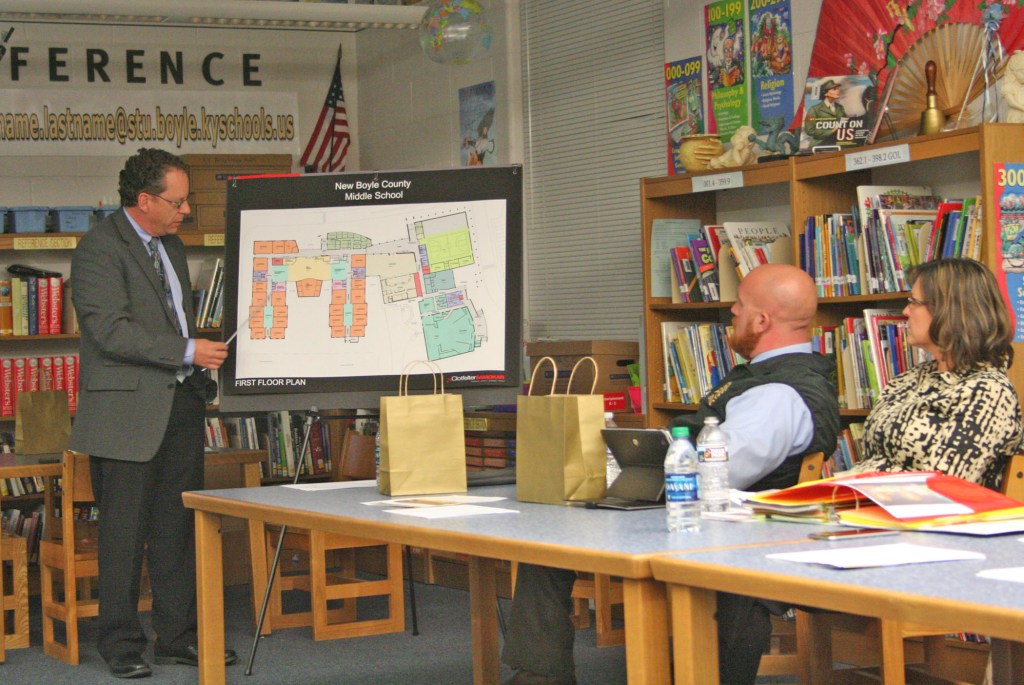 Kendra Peek/kendra.peek@amnews.com Tony Thomas, with ClotfelterSamokar, presented on the schematic site design of the new Boyle County Middle School, which the Boyle County Board of Education approved.

Superintendent Mike LaFavers said he, Assistant Superintendent Chris Holderman and architect Tony Thomas with Clotfelter Samokar met with Kentucky Department of Education officials and were given clearance to build the center, which would be one of the biggest in the state. 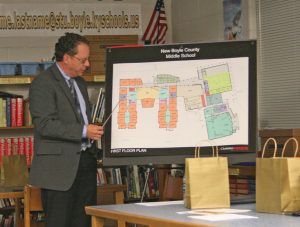 Kendra Peek/kendra.peek@amnews.com
Tony Thomas, with ClotfelterSamokar, presented on the schematic site design of the new Boyle County Middle School, which the Boyle County Board of Education approved.

“As far as KDE is concerned, as long as the money is there, we can do that,” LaFavers said.

LaFavers announced KDE’s approval at Thursday’s Board of Education meeting, where the board also approved the schematic site plan for the new school.

Thomas will now begin meeting with faculty and staff to plan specifics on the different areas of the school, speaking with cafeteria workers regarding the cafeteria, with the district’s drama teacher about the theater, and science teachers regarding the science classrooms.

“This gives him the green light to move forward and pull teachers in,” LaFavers said during the meeting. “He will bring us a set of plans that have been developed and we will start looking at those.” 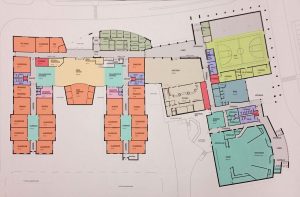 An updated graphic of the new Boyle County Middle School. The new school is expected to open after the 2018-2019 winter break.

The plan is “on course” for a bid date in May and for construction to begin in July, LaFavers said.

“Having this as an alternate gives us a lot of flexibility going forward,” LaFavers said.

Unfortunately, there’s no way to predict what the cost per square foot will be, he said.

The approximately 100,000-square-foot building is expected to cost about $23 million.

Thomas told board members that he was estimating cost based on supplies that were about the middle of the road — not too expensive but not too cheap. 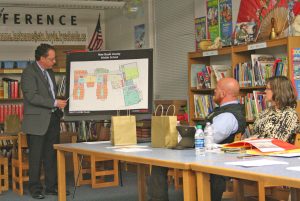 Kendra Peek/kendra.peek@amnews.com
Tony Thomas, with ClotfelterSamokar, presented on the schematic site design of the new Boyle County Middle School, which the Boyle County Board of Education approved.

“It’s a unique building. It’s got unique features. It’s not a straight box with brick and no windows. There’s detail and design here,” Thomas said.

Thomas listed changes made to the plan following input from a teacher meeting and a community forum. The modified plan:

• adds display cases all around the school;

• adds an exterior door to the custodian closet near the cafeteria;

• expands resource rooms into full-size rooms and swaps those with the former locations of the teacher workrooms, which were also expanded to include two bathrooms in each;

• increases the width of stairwells;

• builds custodial space near gym so it could easily be converted into a training room; and

• adds an office for coordinator for the theater space.

Other changes were made as well. All of the changes result in extending the back of the building by 12 feet.

• Learned that there were items that didn’t sell through the surplus and voted to discard of those items. LaFavers said they are working on a plan to better notify the public of the surplus items.

• Accepted the audit that was presented at the working session last week. It can be viewed on the district website, on the finance page under the department tab.

• Tabled a discussion on getting bids for soft drinks for the faculty and staff vending machines. The money generated from the machines allows principals to purchase items or host meals for faculty and staff. Schools can also get free items, such as refrigerators, as part of the bidding process.

The contracts are usually for five years. The board agreed to allow principals the chance to contact potential vendors.