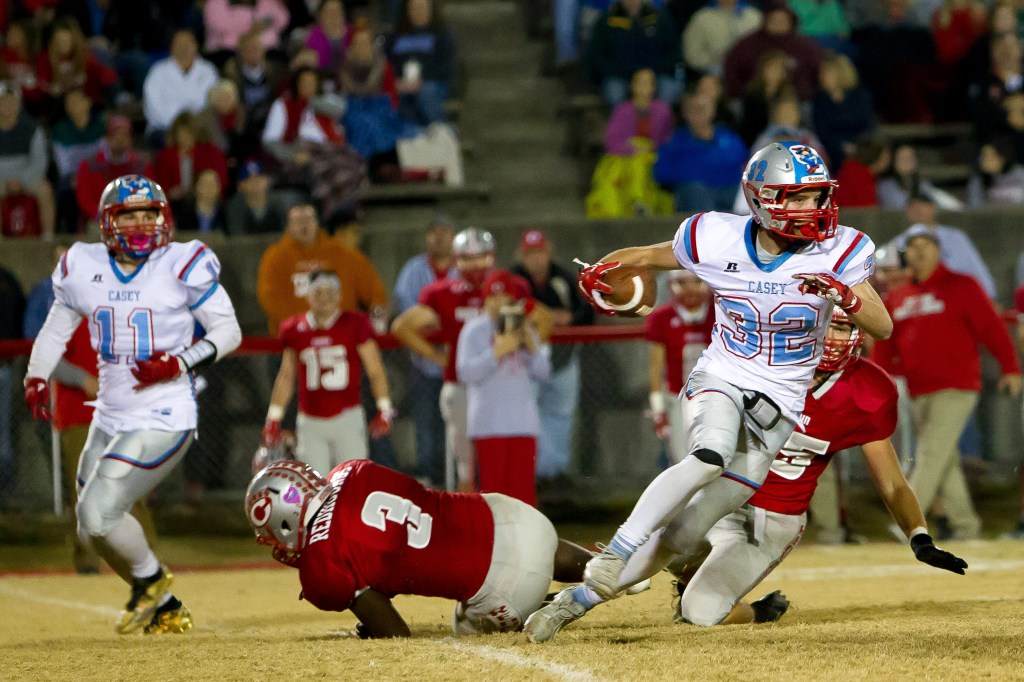 Photo by Les Nicholson/For the Advocate-Messenger

CORBIN – In a season of firsts and bests, this was the last stand for Casey County.

The Rebels had marched all the way to the regional finals for the first time, only to find the only team they had been unable to beat in their first 11 games standing in their way.

They were again unable to push past Corbin, especially after giving up 23 points in the first quarter, and the most successful season in school history ended with a 38-17 loss in the Class 3A, Region 4 final at Campbell Field.

A handful of mistakes put Casey in a 23-7 hole in the first quarter, and the Rebels couldn’t make it all the way out, but they made this a much closer game than the first meeting between these teams. They battled back to within a touchdown late in the third period before Corbin put the game away in the fourth.

“We still made too many mistakes to beat a really good team, but we didn’t make a mistake with effort,” Casey coach Steve Stonebraker said. “Our kids got down early, we got behind the 8-ball and we continued to fight and claw and scratch (and) got the momentum back. Unfortunately they were able to make some plays to close it out.”

By making a game of it, Casey (10-2) wrote one more memorable chapter to the story of its unforgettable season. When the Rebels’ bus pulled up to the stadium, it brought them farther than they had ever been before.

They had already set school records for wins and points and defeated teams they had never beaten before, and a long list of team and individual statistical records had been rewritten as well. And they ignited interest both within their community and beyond the county line in a program that has had only four winning seasons in its 43 years of existence.

“We just hope that we made our program proud, our town proud, our school proud, our God proud, our families proud. That’s all we wanted to do when we came out here every day,” Casey quarterback Breece Hayes said. “God blessed the Casey County Rebels.”

Stonebraker said the bar has once again been raised for future Casey teams.

“As a program, we’ve got to look at this as just getting started,” he said. “That’s what I told the guys that are going to be returning, that they now have a responsibility to continue what the seniors this year were able to lead us to.”

Hayes completed 12 of 16 passes for 92 yards to finish his senior season with 2,587 passing yards, and he ran for 40 yards and both of Casey’s touchdowns. However, he also threw two first-quarter interceptions that led to scores for Corbin (12-1).

“I threw a couple interceptions, and that’s going to happen, but I played my tail off. I just made a couple dumb decisions, but (my teammates) did the best they could for me, and I really appreciate that,” he said.

Casey held Corbin scoreless through the second and third quarters, and the Rebels drove 74 yards in 11 plays – with help from two personal-foul penalties called on the Redhounds – to the Corbin 5-yard line, where they faced fourth-and-1. They opted for a 22-yard field goal by Nick Wilkerson that made it 23-17 with 2:58 remaining in the third period.

“Coming out in the second half we were able to come up with a stop, and offensively we were able to move the ball … and I thought the smart play was to go for the field goal and make it a one-score game and really get momentum back,” Stonebraker said.

Corbin answered, however, with a 32-yard touchdown run by Jonah French on the first play of the fourth quarter. The Redhounds effectively clinched their spot in the semifinals – they’ll host Belfry this week – by burning more than six minutes off the clock on their next series before turning the ball over on downs, then recovered a fumble and scored once more with 1:56 to play.

Soon after that score, Stonebraker called timeout to take his offensive starters out of the game to a standing ovation from the Casey fans, hugging several of the seniors as they headed to the sideline.

“They left the program a whole lot better than they found it,” Stonebraker said of the nine seniors. “I can’t say enough about those guys and their effort and their leadership this year. They did a tremendous job.”

The Rebels faced long odds after the first quarter, when Corbin scored early and often. The Redhounds scored just 69 seconds into the game after Cameron Maguet intercepted Hayes’ pass on the first play from scrimmage.

A 39-yard run by Collin Miller, who rushed for a game-high 74 yards, set up a 4-yard touchdown run by Hayes that tied the game just over a minute later, but Casey’s next series ended with a bad snap on a punt attempt that resulted in a Corbin safety.

The Redhounds returned the free kick to the Casey 36 and scored five plays later on Chase Estep’s second touchdown run of the night to take a 16-7 lead. Hayes was intercepted by Lucas Ellison three plays later, and Tucker Jewell ran 26 yards for a TD on the very next play.

The Rebels made it clear they weren’t going to go quietly, however, when they converted on fourth-and-3 from their own 38-yard line on their next series.

“It sent a message to our team that we’re not going to quit,” Stonebraker said. “Even though it may have been minus territory, we were going to keep trying to fight and trying to move the sticks and stay in the ballgame.”

“We’ve been fighting all of our lives,” Hayes said. “We’re from Casey County, so every day it’s a fight.”

Another fourth-down conversion later in the second quarter led to a 30-yard pass from Hayes to Preston Tucker to the 1-yard line, and that led to Hayes’ second touchdown of the game.

Corbin drove to the Casey 5 before the clock ran out, and the Redhounds were stopped on downs at the Casey 21 on the opening drive of the second half. The Rebels then drove for the Wilkerson field goal that made them only the second team this season to score more than 14 points against Corbin, which was allowing only 7.8 points per game.

“I just felt like we battled,” Hayes said. “I told my guys when we were out there right before the end of the game, ‘The one thing you can take to the bank is that we never quit.’”