Farmers skeptical of plan for electricity

Editor’s note: This is the second part of a two-part series of articles about Inter-County Energy. Mike Denis, local historian, provided information for this article taken from research by Jim Jacobus, president of Inter-County Energy in Danville; Richard C. Brown’s history of Danville Boyle County; Forkland community history; and The Kentucky Advocate.

When talk of forming a new cooperative to provide electricity in the rural area of Boyle County and surrounding counties in the late 1930s, many farmers were skeptical of the new plan. They did not see how the cooperative would be able to pay off the REA loan, and feared their farms would be taken as collateral if this happened.

Others feared the electricity would cause fires, kill birds, and cause cows’ milk to sour. Some did not want trees removed for lines.

The $5 membership was also an issue, some paid with notes, and others in kind — like chickens.

The sign-up team soon found that if the wife was present, she would turn over the money before their husbands finished arguing. 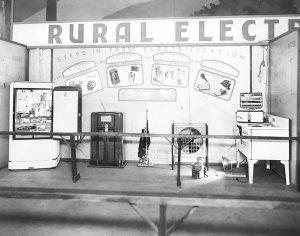 Photos contributed
Residents in the rural communities of Boyle and surrounding counties exhibited displays of electric appliances they could use with the installation of electricity.

Private utilities also were building lines in rural areas without permission of the Public Utilities Commission.

This ended on May 18, 1937, when the commission ordered private utilities to sell to co-ops at wholesale prices. Inter-County decided to buy electricity from Kentucky Utilities, a private company.

Some farmers had to give rights-of-way for the lines which did not make them happy. They were reminded of the benefits of having electricity by REA and finally agreed.

Eventually, 1,512 customers in Boyle and adjoining counties had signed up for electricity and construction began in June.

The Advocate reported construction began in Perryville on Dec. 29, 1937.

The REA required two homes per mile before energizing a line, however, many homes were wired and ready for lines before they reach them.

W.G. Prewitt and and his tenant Uncel Whayne, who operated a farm north of Perryville, was the first farm to receive electricity on June 1, 1938, and by September new lines had reached Forkland.

Work was extended to Herrington Lake and Wells Landing areas in the spring of 1939. By September, lines were constructed to Stanford, Big South Fork, Little South Fork, Quirk’s Run, Hustonville and Bryantsville.

Of the 24 Kentucky co-ops, Inter-County was the most successful in the 1940s. It paid off loans early, had 1,601 miles of lines with 1,606 customers that covered all or parts of 10 counties.

Farmers were using electricity in all aspects of their farms, from cooling milk to heading chicken brooders. Homes also were wired for electricity. 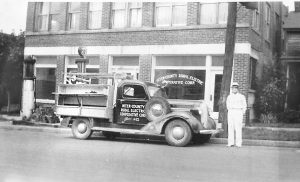 The project also slowed migration from farms to cities, but was halted after World War II began because copper was reserved to defense and war efforts.

In 1943, electricity extended to 51 more farms to aid in wartime food production which was up and spoilage down.

Currently, Inter-County has more than 65 employees and 25,000 members in 12 counties: Boyle, Lincoln, Garrard, Mercer, Nelson, Washington, Marion, LaRue,Casey, Taylor, Madison and Rockcastle, according to the Inter-County website. It started out with eight employees for the first 500 members.

Inter-County is locally owned and controlled by its members.