Going to the Dogs: Danville woman turns passion for caring for animals into home business 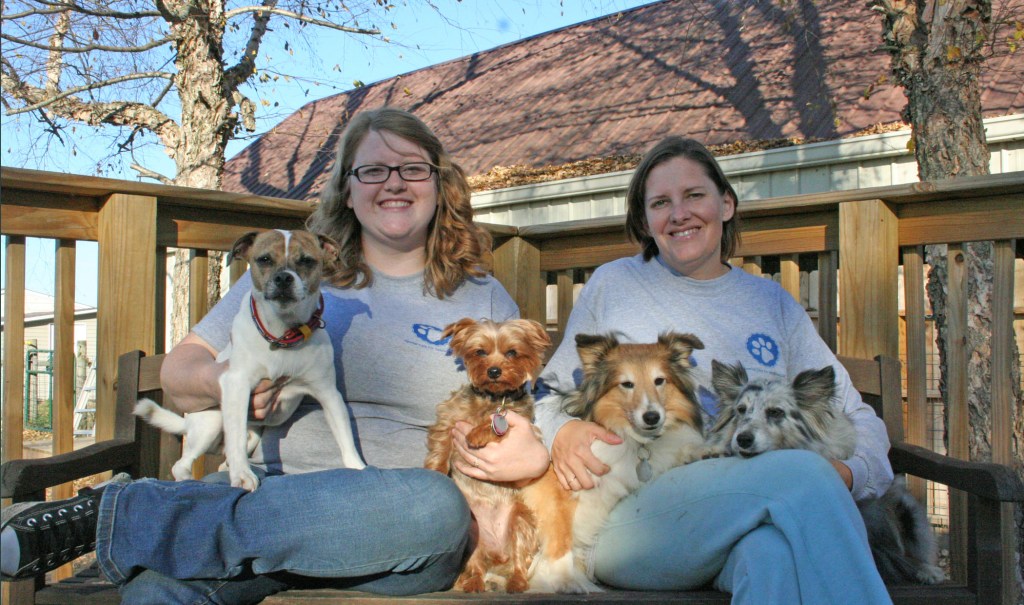 A love for animals has blossomed into a way of life for Danville’s Jenna Gordon.

“I’ve always loved animals,” Gordon said while on the back porch of her home, which doubles as the location of Special Care for Special Pets, a dog boarding and day care facility.

A Boyle County native, she started volunteering in high school at a local veterinary clinic. After graduation, she began working for a clinic in Lexington and considered a future as a veterinarian, but decided the distance was further than she was prepared to go. Instead, she continued working for the vet and pursued a career in human healthcare. 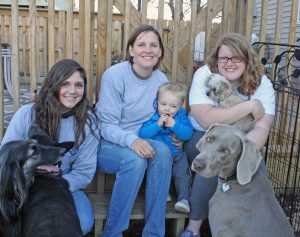 While she worked in Lexington, Gordon met her future husband, Matthew. She also started dog sitting, thanks in part to her future mother-in-law, who would recommend her to people she knew, and in part to the veterinarian’s office where Gordon worked. If anyone was going to be gone and had an animal they needed looking after, but didn’t want to bring it to the clinic, they could post a note at the office. Employees were encouraged to take some of those animals home, if they could.

“I branched out from there a little bit,” Gordon said.

Over the years, the pet sitting would fluctuate, depending on where Gordon was working at the time. While at a clinic in Harrodsburg, it was discouraged. While working at a bank in Perryville, it would bloom back out, because she worked regularly with the public.

Word of mouth has always been her method for advertising, until last year, when Gordon got business cards to hand out, calling her business Special Care for Special Pets.

In May, she took the leap, turning her home into a full-time doggy daycare facility, complete with kennels for overnight boarding.

“In the beginning, it was spring break, fall break, and occasional holidays were the busy times. The last three years, it started becoming year-round full time,” Gordon said. 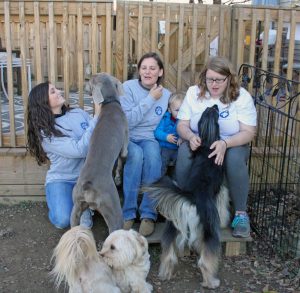 People had encouraged her to go full-time with pet care, but she said it took a while for her to come around to the idea.

“I wouldn’t listen. God just kept pushing me. Events happened; I wouldn’t listen. I lost my job at the bank and I was like, ‘O.K., I’m going to listen,’” she said. “Then I got scared, so I got another job. He pushed me again, and I was like, ‘All right, I’m going to listen.’ Then I quit that job. I decided to take a leap of faith and do this full-time.”

A mom of a two-year-old boy, Gentry, Gordon said he has been spending more and more time at home with her and the dogs.

“I’m slowly getting brave enough to be a full-time mom and a full-time dog sitter,” she said.

Gentry plays along with the dogs, not afraid of them at all.

Gordon officially started staying home full-time in May, and said she had some skeptics.

“When I first started staying home, I had a lot of people ask me if I was crazy. Repeatedly. I said I hadn’t decided yet,” she said, laughing. “I love animals. I love dogs.”

There are “no normal” moments when working with dogs, Gordon said. One night, a tornado warning came through, sending her and 11 dogs into the guest bathroom, to be safe.

“I had cheese and crackers to pacify them,” she said.

During a different storm, they all gathered in the hallway and the electricity went out. When it came back on, all the dogs were asleep, Gordon said. 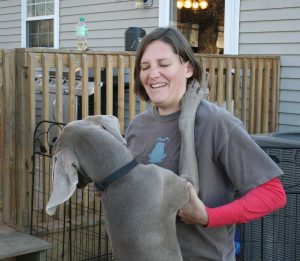 Kendra Peek/kendra.peek@amnews.com
Gordon gets a hug from Grayson.

Not including her four dogs, Gordon has 15 regular daycare dogs that filter in and out each week, and five to seven each day, with eight to 10 boarders on top of that.

Although there’s a kennel connected to a fenced-in area in their backyard, most of the overnight dogs stay in the house with Gordon and her family. She tries to keep them in the way they’re accustomed: if they are usually crated at night, they’re crated with her; if they usually sleep loose in their family’s house, they sleep loose in her family’s house. The guest bedroom has been converted to a dog-friendly space, as well as other areas of the house getting mattresses for the dogs to sleep on.

“They are all over the house,” she said with a smile. “They’re part of the family. Whatever their routine is at home, we try to be here, as long as they’re safe and happy.”

Daycare dogs are dropped off between 8 a.m. and 10 a.m. They get a nap time and snack time around lunch. She has an established routine with her regulars.

Currently, a new kennel is going up on the back of the property. The front space of the kennel will be set up like a “home environment,” complete with a daybed, while the back will have runs for dogs that need a little time on their own. It’ll be helpful for the cold weather season, she said, to give the dogs a little room to run, play and rest. There will be a covered area between the two buildings, to allow them to use the bathroom in a covered space.

“We try to be crate-free as much as possible,” Gordon said, but that is an option if it needs to be. 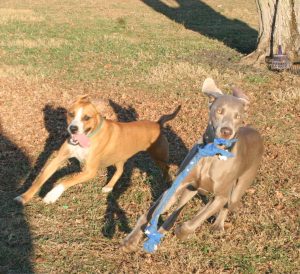 If the weather is nice, the dogs spend a lot of the day outside playing. The dogs aren’t separated by size as much as by energy level and temperament.

Some dogs need a day or two of rest after their day of playing. Some of the dog owners have expressed gratitude, Gordon said, because the day of activity has really helped the dogs get out energy that would otherwise be pent up if they stayed home alone all day.

“I’m more comfortable with two sets of eyes and ears. Especially for drop off and pick up, and feeding,” she said. “They can get along one minute and have spats the next.”

Most of the dogs who come to doggy daycare are 3 years old or younger, but Gordon said there are some older dogs who come. Those they usually keep separate and monitor their rest time a lot more.

Dogs also get to do “arts and crafts.” At Halloween, they painted pumpkins with paw prints, which also resulted in painted prints on her porch. For Thanksgiving, she said she plans to make turkeys.

“It’s never a dull moment — no two days are the same,” Gordon said.

Gordon has become the “god mom” of several of the dogs. She makes sure to send photos and updates daily to those who are kenneling their dogs, and even to doggy daycare “parents,” if need be. Eventually, she plans to install webcams in the outdoor play areas for owners to be able to check in on their pets.

There are some dogs that have become so attached, they don’t want to leave at the end of the day, she said, and they get excited when they turn down Perryville Road to come to daycare.

Every dog has to turn in vaccine records and she asks for two weeks notice. Those who come get baths and nail trims.

Although her focus with the daycare is dogs, Gordon said she will do in-home checks on other animals, and has taken care of cats, chickens, goats, cows, horses and fish before.

Gordon said she’s also learning more about the business side of things.

“It continues to be a learning thing,” she said. 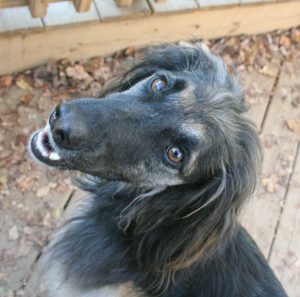 Someday, she hopes to use Special Care for Special Pets as a ministry, donating a growing portion of the proceeds to organizations in need.

That’s important, Gordon said, because she wants to maintain a faith-based business.

“The dogs and people become part of your family,” she said. “That makes for a good foundation. It helps to show God’s love everywhere you go.”

To learn more about Special Care for Special Pets, visit the Facebook page.

Kendra Peek/kendra.peek@amnews.com Jenna Gordon gets a “hug” from Jax

Kendra Peek/kendra.peek@amnews.com Gordon gets a hug from Grayson.

Kendra Peek/kendra.peek@amnews.com Gordon gets a hug from Grayson.