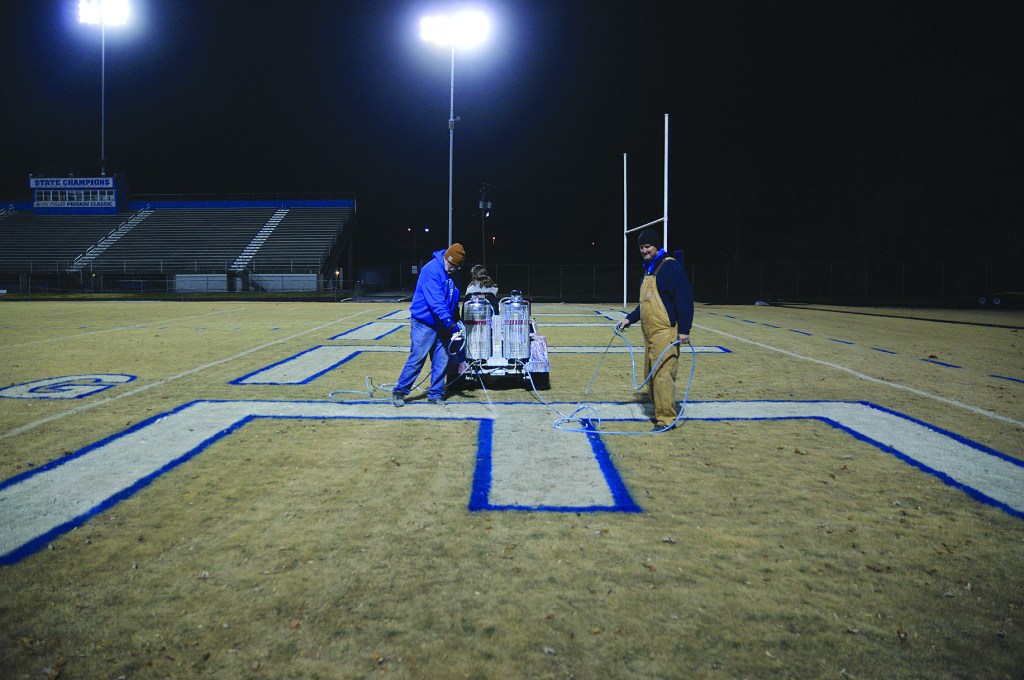 For twenty five years, Danny Gadberry and a group of volunteers have been painting the field at Admiral Stadium. They haven’t done it for fame or money, but Gadberry says it’s been about the friendships they’ve built on Wednesday and Thursday nights in the fall.

“You couldn’t ask for a better group of people,” Gadberry said.

This week will be the last for the group of nine as they hang up their spray wands and paint. The group this year includes Gadberry, Donny Dampier, Steve Young, Buzz Belcher, Butch Taylor, John Zinter, Eddie Smock, Tom Wethington and Richard Williams.

Before the game three weeks ago against Allen Central, Gadberry painted each volunteer’s initials in the state logo at midfield to honor the group.

Gadberry was roped into helping out in 1991, and when he took a full time maintenance position with Danville Schools soon after, the fit became even more natural and permanent. 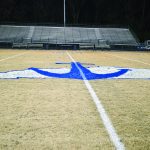 It hasn’t always been easy for the group. Gadberry remembers the challenges the field presented before new drainage was put in four years ago.

“It would never dry,” he said.

Last year brought a memorable week with heavy rain every day leading up to the Cambpellsville matchup. Their schedule kept getting pushed back until they had to paint in the rain on Friday, but after making a few passes on the field, Gadberry had to go against his preference and use aerosol paint on the field. They finally got done about five hours before kickoff.

Seven of the volunteers were at Admiral Stadium on Tuesday night, getting started a night early with rain in the forecast and Thanksgiving on Thursday.

And none were complaining to have one more week to paint as the Ads host Covington Holy Cross at 7:30 p.m. Friday in a Class 2A state semifinal.

Of the volunteers in this year’s group, only Dampier has a son who still plays for the Ads. Young’s son, Hamilton, graduated last year and currently plays at Thomas More.

Before this season, Hamilton asked his dad if he’s still going to paint. When Steve said yes, the question became, “Why?”

“And he said, ‘Because I just like these people,’” Gadberry said.

There’s no one waiting in the wings to take over the painting duties once this group sets aside. Friday’s game might be the last time the extra flourishes are on the field — the school and mascot names in the end zone, the logo at midfield — so definitely take the time to enjoy what Gadberry and his crew have done for so many years.

Or, heck, someone else could step in and keep the tradition going, just like Gadberry did a quarter of a century ago.