Two of Boyle County’s most consistent captains were named two of the best in the area by coaches and media.

Boyle County coach Chuck Smith said the pair were stellar on and off the field for his team.

Bramel earned the lineman of the year award after being the go-to run blocker on the Boyle County offensive line.

“He was mostly our run-behind guy on offense,” Smith said. “He’s got Division I size and athleticism, and he’s really a tough, physical kid as well. I think his best football is to come. He’s going to keep getting better and better, the more he develops and the stronger he gets, the more weight he puts on. He can really become a true Division I player.”

“Keeping them safe and having those three running backs this year made us look good this year,” Bramel said.

He also said the offensive line created a bond toward the end of the season that helped them succeed. Losing two seniors will hurt next season, but Bramel was confident they’d come back stronger in 2017.

“We’re going to be losing Hunter Floyd and Tucker Kilby, they were good leaders and we’ll be missing them,” he said. “But we should be good for next year. The line as a whole, I thought we really came together. We were kind of the core of our team, I feel like. We always said, ‘FWF,’ Family Within a Family, for the O-Line. I think we really became a family as an O-Line.” 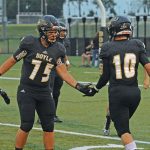 the end of the year switched to offense because cramps limited his playing time, Paycheck said. But teammates stepped up.

“Wade Acey had a tremendous year, Hunter Floyd played most of the season and Clete Hellyer moved into his spot, he played very well, we were on the same side,” Paycheck said. “Aaron Hatter, me and him eventually switched positions at the end of the year. Our linebackers, Kaden Gervacio, Kagen Jackson, they really helped out a lot.”

Paycheck said his award was more of a “team” award because of the unit he played with.

After starting the season 0-3, Paycheck said he and his teammates wanted to make it a point to come out strong at Anderson County, a 41-13 win which became the first of four straight victories for the Rebels.

“To be a part of that (0-3 start) as a junior, it was kind of heartbreaking,” Paycheck said. “When we went over to Anderson County, we were thinking, ‘This is our chance to regroup and get our season back together.’”

Smith said Paycheck’s award is fully deserved because of the way he performs in practice.

“Mitchell plays just like he practices,” the coach said. “He’s full speed. He refuses to stay blocked, he won’t accept staying blocked. That’s what you’re looking for, someone that plays that hard. He plays with a lot of heart, desire and determination. He’s very explosive and physical, he’s just a really good player.”

Paycheck finished the season with 108 total tackles and had 12 tackles for loss. He led the team with three fumble recoveries.

It was a resurgent year for Paycheck, who missed a majority of games during his first two years of high school due to injuries.

Smith said he’ll be looking for both players to take on additional responsibilities as senior leaders next season.