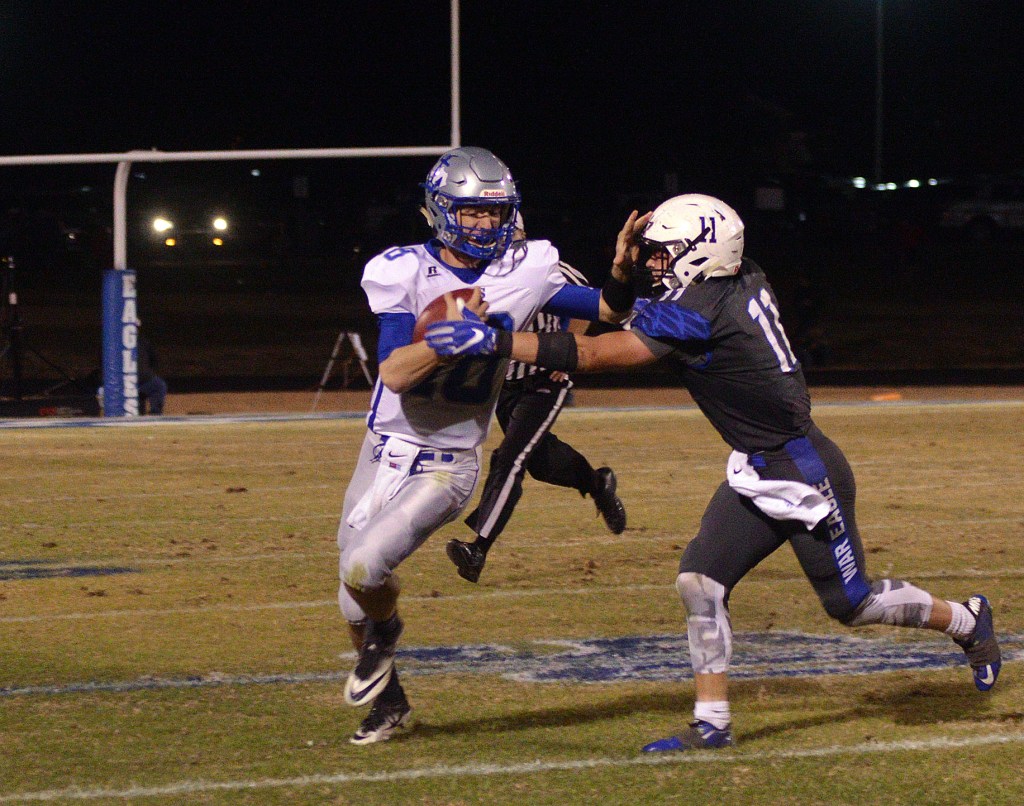 When Clay Clevenger returned to take over the coaching job at his alma mater four years ago, he brought with him his preferred offense, a split-back veer option. And while the Admirals featured that familiar offense in his first season, it became apparent to him if the team was to succeed, he’d have to switch things up.

While the Ads rushed for over 2,700 yards in that first season, they went 6-6, lost in the second round of the playoffs and were outgained by nearly 300 yards. Manning the quarterback spot was a freshman named Zach Dampier, who was more of a drop back passer than runner.

So Clevenger stepped out of his comfort zone, brought in coaches who were more familiar with a spread offense, and the rest is history. Dampier has turned into a once-in-a-generation talent and the Ads are off to their second straight Class 2A state semifinal.

This year has been the best in Dampier’s stellar career, throwing for 3,151 yards and 38 touchdowns with six interceptions in 291 pass attempts. He was the unanimous choice as the 2016 The Advocate-Messenger All-Area Offensive Player of the Year.

“I feel extremely blessed to know everybody sees me in that way, and it shows the type of team I’ve been on that they’ve allowed me to produce like that,” Dampier said. “None of those stats would be possible without somebody helping me along the way. It’s really a team award, and I’m just glad it went to Danville.”

Dampier will end his career atop the Ads record books and among some of history’s best names in the state. He has 8,445 yards and 93 touchdowns, 21st and 24th in KHSAA history, while his career completions and attempts also rank among history’s leaders. Seven more TD passes and 165 yards moves him into the top 20 in each category, and if he hits his season average in two more games, he could wind up 15th in all-time passing yards.

But success wasn’t always written in the stars for Dampier and this class of seniors. They hadn’t won a game in middle school and the class was small — just Dampier, Ellison Stanfield and Jeremiah Wheat.

“When I interviewed for the job … I asked what the talent level is going to be like and I was told for the first couple of years it wouldn’t be bad but then there’s going to be a fall off,” Clevenger said. “A lot of people in Danville expected these last two years to be down for Danville football.

“That’s what people saw, but people don’t realize that scrawny little eighth grader is going to grow into a 6-foot-3 ½, 180-pound quarterback who can zip the ball around the field.”

While few people could have predicted this sort of career, Dampier being a football player was never in question. His father, Donny, had a standout career at Bourbon County before playing fullback and linebacker at Eastern Kentucky.

“He was my coach until middle school, he’s always been a positive influence,” Zach said. “He couldn’t necessarily help me with the quarterback spot, but he helped me stay positive and take me to all the camps that I’ve been to.”

Zach said there are pictures of him as a baby with a football. He’s played other sports — he’s lettered in basketball and baseball at Danville — but football has always been it for him. And it was always quarterback or bust for him. He’s lined up behind center since his flag football days.

“My eighth grade year I played other positions, but I’ve always been a quarterback first,” Dampier said. “… I like helping other people succeed. Even in basketball, I was always more of an assist person; I like finding the perfect pass to allow other people to showcase their talents.”

Yet when Clevenger and the veer option arrived at Danville, that’s what Dampier ran.

“Freshman year, we ran the ball a lot and then I think he realized that I’m just not a runner,” Dampier said. “That’s why I play quarterback, I just can’t run.

“My freshman year when we ran the ball, I was terrified because I was a little freshman. Senior year, I still don’t run it a whole lot, but I feel more confident and I can make plays happen.”

Three runs this season stand out — a bruising TD rush at Campbellsville, an elusive 20-yard TD burst in the win over Allen Central, and last week against Lexington Christian when he stiff-armed a defender near the sideline.

One of the keys for the Ads heading into the season was Dampier’s ability to evolve as a leader. He admits he’s always been more of a lead-by-example sort of player but becoming more vocal was a process.

“Being vocal has been more of a struggle because I’m more of a reserved, shy guy,” Dampier said. “I think I stepped into that role more here recently. At this point, there are no do-overs. … I always knew the team believed in me and they wanted me to fill that role, and once the playoffs started, I knew this was it, there was no reason to hold anything back.”

Each year that’s gone by, Dampier’s numbers have steadily improved. After throwing for 913 yards and eight scores as a freshman, he upped those numbers to 1,889 and 17 as a sophomore and 2,492 and 30 as a junior.

Clevenger pointed out Dampier’s excellence as a student and cerebral play, and to his point is the decision making — after throwing 10 interceptions in 116 attempts as a freshman, he’s thrown 15 in 779 over the next three seasons.

“It’s his approach, his demeanor,” Clevenger said. “He’s very smart, very cerebral. You don’t have to tell him something more than once and it gets done. It goes from technique to this guy is going to be open in this situation, he just processes information and holds it in, and when it’s time to execute, the information is there.”

Dampier has benefitted from a cast of outstanding players around him, from running backs Stephen Ray and Donlevy Harris to receivers Dmauriae VanCleave, Triston Coffey, Ellison Stanfield and David Walker. While some of the long gains the Ads make in the passing game come after the catch, Clevenger said it’s still up to the quarterback to make the right read.

“We’ve got some speed, we’ve got some playmakers, and when you’ve got a guy who can get the ball in their hands quick, it gives them that much more space and makes the problem that much worse for a defense,” Clevenger said. “If you had a slow release, if the ball comes comes out slow, if he’s slow processing the information at the quarterback position, some of those 79-yard passes might be three- and four-yard gains.”

Dampier was named the preseason Offensive Player of the Year in a vote by the coaches, and he served notice in the first game the votes weren’t wasted, going for 332 yards and six TDs in a win at LaRue County.

It’s been a unique journey for two Danville guys starting their careers as Admirals — Clevenger as the coach, Dampier as the quarterback — at the same time. It’s given them a close bond.

“Us coming in at the same time, we really feel like we’re in it together,” Dampier said. “It improves our relationship even more because I’ve never played for another high school coach and he’s never had another quarterback. I’m glad he’s been able to be the quarterback coach. We’ve had some good times.”

The book on Zach Dampier is still being written, with a possible two games left in his standout high school career. There could be even more good times yet to come.