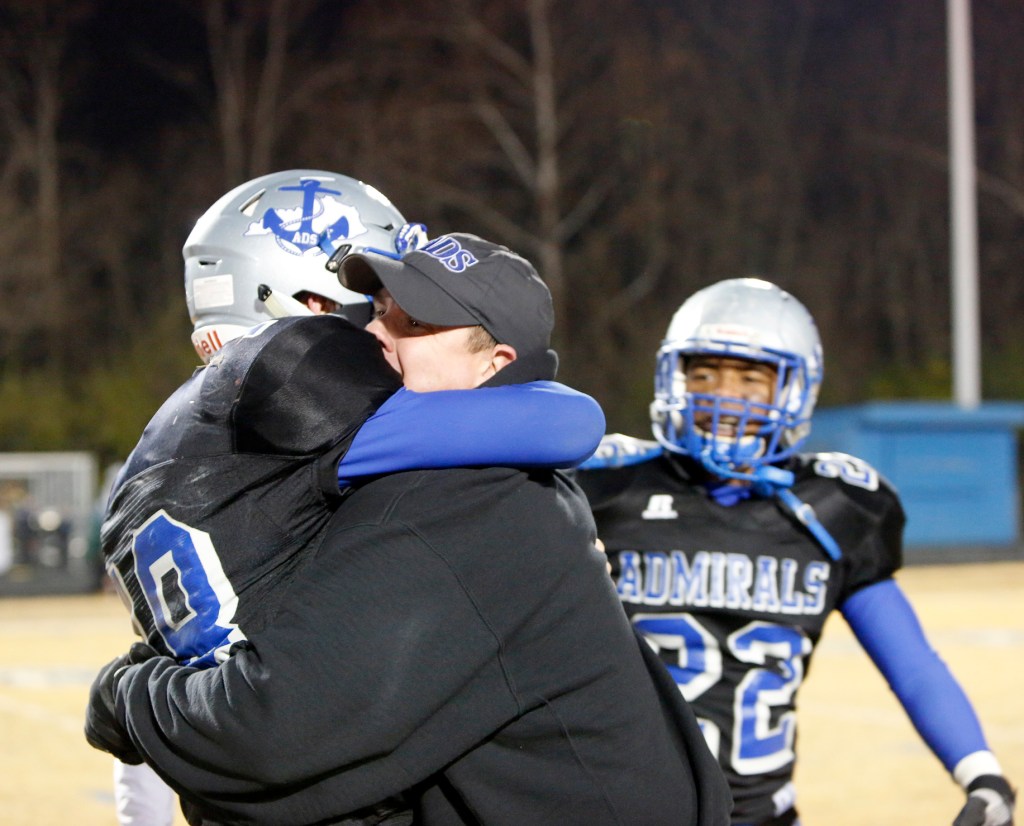 All around Admiral Stadium, spontaneous displays of joy were breaking out.

Fathers were hugging their sons. Cell-phone cameras were capturing the smiles. Fans were dancing in the grandstand. Little boys were screaming, “We’re going to state!” And police cruisers stood ready to escort the team from the field to the school.

It was a celebration 10 years in the making, as a Danville program that once regularly played for championships completed the long road back to title contention. The Admirals defeated Covington Holy Cross 42-35 in a Class 2A semifinal Friday night to earn their first trip to the state finals since 2006.

“You grew up your whole life thinking about getting there, and now we’re finally here,” Danville quarterback Zach Dampier said. “So we’ve just got to prepare hard next week and make sure we make the most of it. We don’t want any regrets on the biggest stage.”

Host Danville (12-2) punched its ticket to Bowling Green after the Admirals’ offense lit up a Holy Cross defense that had shut out five opponents and hadn’t allowed more than three touchdowns in its previous eight games, and their defense held a powerful rushing attack in check and made a game-saving stand that stopped the Indians’ comeback cold.

Now Danville will play for its 11th state championship — and its first since 2003 — when it faces Louisville Christian in the Class 2A finals at 2 p.m. Dec. 4.

“It’s what I came home for, to try and get this opportunity,” Danville coach Clay Clevenger said as he surveyed the celebration.

The Admirals came up one win short of the state finals last year, losing in the semifinals to Newport Central Catholic. This time around they led by three touchdowns when the fourth quarter began, but it took what was in effect a goal-line stand — though it was nowhere near the goal line — more than 10 minutes later to secure their title shot.

Holy Cross (10-4) scored twice in just over six minutes to pull within a touchdown, then got the ball back near midfield with 3:07 remaining.

The Indians, who got more than three-fourths of their offensive yardage on the ground this season, ran the ball twice to bring up third-and-1 at the Danville 47-yard line. They turned to Xavier Abernathy, whose plunge up the middle came up inches short of a first down. They tried the 228-pound Abernathy again on fourth down, with 240-pound running mate Derrick Barnes blocking for him, and what seemed to be the entire Danville defense converged to stop him short of the line of scrimmage with 1:37 to play.

“Five hundred pounds worth of running back, and to shut the door with a bunch of high school kids, that’s pretty big time right there,” Clevenger said. “We do a thing a couple times a week (in practice) called score drill, and it’s just one on one, let’s get after it. Going into (fourth down, we said), ‘Score drill right here, one score drill to win the football game.’ And our kids just got off the football and put their rear ends in the backfield.”

Defensive lineman Christian Hill said it was exactly like all those score drills in practice.

“We went to our 60 defense where we brought all of our defensive tackles in, and we just blew it up and caught them in the backfield and stopped them,” Hill said.

Barnes and Abernathy, who were averaging a combined 189 rushing yards per game, had 84 and 82 yards, respectively, for Holy Cross.

Danville outgained the Indians 302 yards to 282. Dampier accounted for most of the Admirals’ offensive gains, as he threw for 256 yards and four touchdowns and was their leading rusher with 42 yards and a TD.

The Danville quarterback had minus-24 yards rushing in Danville’s first 13 games, but he blew that number away with three carries for 34 yards on a third-quarter scoring drive that he finished with a 12-yard touchdown run.

“He showed his will tonight. He had a couple of big-time runs that he hadn’t had to do, but he wants to get this done, so he was selling out as well,” Clevenger said.

David Walker caught eight passes for 175 yards and had three touchdown receptions, a blocked punt and an interception for the Admirals, who scored three times in the third quarter to go up 42-21.

Walker started the third-quarter scoring on Danville’s first possession of the second half with a 47-yard touchdown catch that broke a 21-all tie. Dampier scored about six minutes later, and Tanner Ford pounced on a fumble on the ensuing kickoff to set up another Dampier-to-Walker TD pass just 23 seconds later.

Walker intercepted a pass by Holy Cross’ Dylan Couch three plays later, but the Indians got the ball back two plays later when Dampier fumbled and Jo Jo Cusick recovered, and they scored on their next play on a 2-yard run by Abernathy.

A Dampier punt forced Holy Cross to start its next drive at its own 2, but the Indians drove 98 yards in 10 plays for another Abernathy TD run that pulled them within 42-35 with 5:34 remaining.

“These kids just competed in that second half. We didn’t make it easy, but we competed,” Clevenger said. “This group laid it on the line for us tonight.”

Holy Cross seemed to have momentum on its side late in the first half when it scored twice in 41 seconds to take the lead for the first time. Barnes ran two yards for the first of those touchdowns, and two plays later he forced a fumble, recovered it and returned it 34 yards for a score that put the Indians up 21-14 with 1:19 left in the second quarter.

Danville was able to answer, however, with a seven-play, 58-yard drive that took only 50 seconds. Dampier went 6 for 6 on the drive, and Warren and Ford had two catches each. Warren finished the drive with a 14-yard scoring pass to Jaleel Warren 20 seconds before halftime.

“They had a lot of momentum … and for us to bounce back and get a touchdown and tie it up was big,” Clevenger said.

Hill said it was about that time that the Danville defensive front was able to start pushing past Holy Cross’ powerful offensive line.

“Their O-line was pretty good, but we started getting hits in the backfield,” Hill said.

Clevenger said Hill was one of the leaders at getting into the Indians’ backfield and to their quarterback.

“There’s so many guys that made big plays,” Clevenger said.

That bought the Admirals one more week of work to get ready for Louisville Christian (13-1), which defeated Mayfield 48-24 on Friday.

“They complain about running gassers every day, but these last two weeks I’ve reminded them, ‘All you did was earn yourself more gassers,’ and they cheered,” Clevenger said.

With that, the celebration resumed.

“We’ve got everybody out here on the field, having a great time,” Walker said. “It’s time to be Title Town again.”