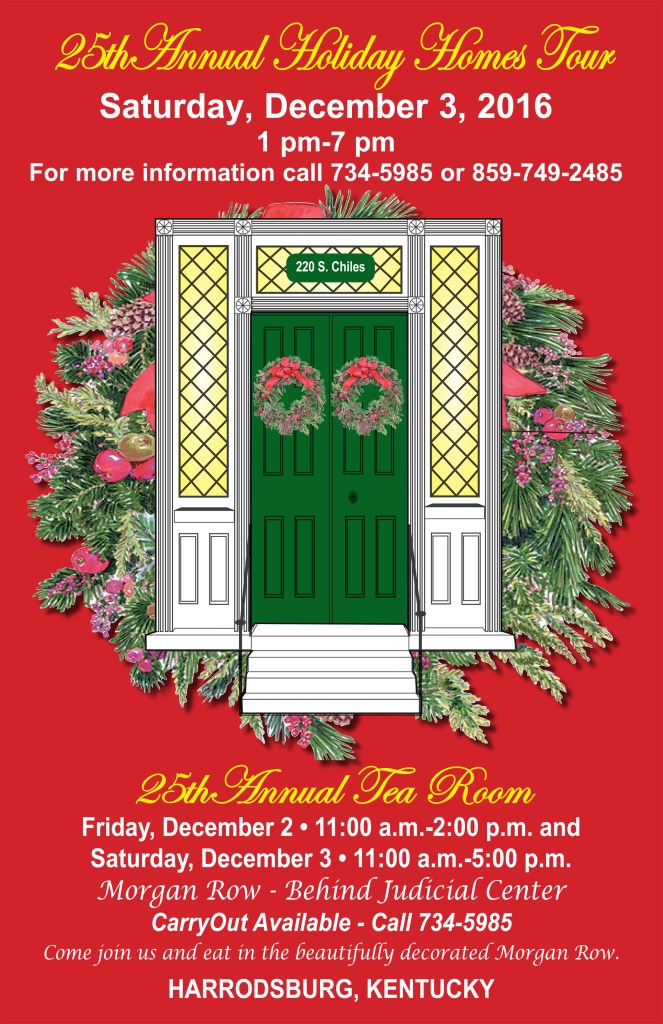 HARRODSBURG — Now in its 25th consecutive year, the Harrodsburg Historical Society’s major fundraiser offers up a listing of decked-out houses for tours.

The society’s Marian Bauer says with only one exception, all of the properties on this year’s Homes Tour are new listings

“As always, there are homes from different eras in a variety of architectural styles and all with unique features and stories to tell,” Bauer says. This year, the oldest on the list is a log house, circa 1794 — with a portion that appears to be a settlement cabin. “On exhibit there is a chair on loan from the Harrodsburg Historical Society known as the Ann McGinty Chair. Ann’s first husband, William Pogue, carved it from forest timber when they were living in Fort Harrod …”

With an almost entirely-new lineup, Bauer says having seven properties never having been on the tour over the last 24 years is quite a feat. She says it’s important for interested participants to know: this is not a “decorators’ showcase.”

“These are wonderful private homes whose owners graciously open for our enjoyment. We have houses that have been faithfully restored and those that are in process, and such is the situation with two of the properties. The 1880’s Thompson-Daviess house has undergone a total restoration with much of the original material intact. The present owners, Lewis and Myra Prewitt, are the third generation to occupy the home that her grandparents purchased in 1918. Beriah Magoffin, whose home, Clay Hill, is also on tour, first owned the lot on which the Thompson-Daviess house stands. He sold it to the Daviess family in 1817.”

The Clay Hill property, she says, is a work in process of restoration and it is a magnificent house worthy of preserving. “Dating to the early 1800s, the original architecture was Federal, but the immense portico with columns was added circa 1845 to reflect the Greek revival of the antebellum period.”

Bauer says although not open to the public, the two-story servants’ quarters and smoke house still stand.

Also on tour this year, Bauer says, is a house built in 1981, which had a major renovation in 2001, but is filled with the most beautiful decorations and collections of fine furnishings of historic significance.

“There will be music at the beautiful country Kirkwood Baptist Church, and since it is the last stop for those who may be traveling north, refreshments will be served in their fellowship hall.”

A special offering this year will include a discount to those who purchase tickets prior to Saturday receiving a $1-off of admission to The Ragged Edge Community Theatre’s performance of “A Christmas Carol” that evening, then on Sunday with their tour ticket.

“A Christmas Carol” performances are 8 p.m. Friday and 3 p.m. on Sunday. Tickets for the tour will be sold at the theater on Friday when the Box Office opens.

“We like to remind our visitors that the souvenir booklet with all the histories of the houses is the ticket and it must be presented at each property on tour,” Bauer says, and reminds that the tour is a self-guided event and may be taken in any order.

The tour ticket does not include the Tea Room, which is an additional offering on Friday, and on Saturday during the Homes Tour. The tea is held at Morgan Row, 220 S. Chiles St., behind the Judicial Center. On this year’s bill of fare will be vegetable soup and chili; sandwiches, including country ham and chicken salad, pimento cheese and olive nut; hot spiced tea; and assorted drinks. Carry out orders are available during Tea Room hours by calling (859) 734-5985.

The tour ticket does NOT include the Tea Room and the self-guided tour may be taken in any order. Also, tickets are sold at all the sites on tour as well as Morgan Row (Historical Society Headquarters & Tea Room), 220 S. Chiles Street, Beaumont Inn, J Sampson’s Antiques & Books on Main, and the Harrodsburg Tourist Commission. Tickets: adults/$15; seniors & groups of 20 or more/$11.

• Tickets may also be used at the Ragged Edge Community Theatre’s Box Office for a $1 discount off of admission to “The Christmas Carol.”  Visit raggededgetheatre.org for play tickets.