The house sits on a portion of 1,000 acres his father Beriah Sr. purchased in the early 1800s from Jonathan Clark, brother of George Rogers Clark.

Clay Hill, one of the major landmarks in historic Harrodsburg, will be among six houses and two churches to be open Saturday, Dec. 3, for Harrodsburg Historical Society’s 25th annual Christmas Tour. 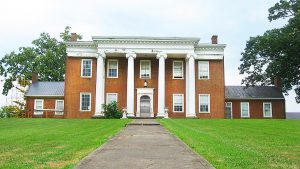 Built in 1812 by the governor’s father, the house has an interesting combination of early architectural features in Kentucky.

Originally the house was a large two-story block with symmetrical one-story wings set back a distance from the facade. Brick is laid in Flemish bond.

The front has five bays, the wings have two, and another entrance on the south wing. A kitchen ell is off the rear of the south end of the main block. Foundations are made of local stone.

The rear of the house is higher above ground than the front.

Windows have six-over-six pane sash. Except for the main entrance, the openings have plain frames and shaped sills and lintels. Attic lookouts are on the end walls of the main block and wings.

Woodwork by Matthew Lowery, a local cabinet maker, features the front doorway with a recessed fanlight with 13 panes said to represent 13 original colonies.

Interior casings frame the tri-panel door and fanlight with vertical bands of reeding.

An unusual exterior brick arcade in the back of the house has Greek Revival portico on the facade. The arcades are on brick columns.

Evidence shows brick walls under the arcade were

stuccoed at one time and a chair rail that remains in tact.

The interior of Clay Hill has a one-room deep central hall with a door leading to the arcade.

Off the hall is a closed stairway. Door frames and chair-railing are decorated with rope moldings. A men’s power room was under the stairway.

The house has two parlors with mantels.

A parlor to the north has a Federal-style mantel. A center panel features an oval sunburst linked to the deeply carved rosettes on side panels. Fluted columns support the mantel. The original chair-railing remains in the south parlor, but the mantel is less ornate with reeding below the shelf and an oval sunburst in the raised center panel. Each side has smaller paired vertical sunbursts supported by paired reeded pilasters.

A large built-in cupboard has a round arch and keystone. The bottom has three doors with double vertical panels.

Off the south parlor features a dining room with mantel, a built-in cupboard with three doors above with two doors and a row of drawers below.

The second floor has two bedrooms with fireplaces, and a 15-inch wide stairway to the unfinished attic.

The south wing which originally housed the kitchen, is now a large sitting room, with a brick fireplace.

A traveler’s room was in the north wing. Later additions included a door connecting the north parlor, a wing, and a small addition to the east.

Except for the kitchen, original white ash boards cover the floors.

The grounds include a brick smokehouse; a two-story, four-bay brick slave quarters with exterior end chimneys. An icehouse also was originally on the grounds.

Clay Hill mansion went out of the Magoffin family to John B. Thompson, father of J.B. Thompson, who was elected as U.
S. senator in 1851. 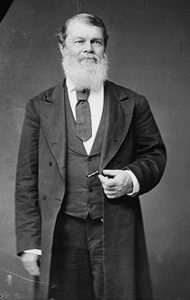 Other owners include A.G. Kyle owned the property in 1876 and Mr. and Mrs.Willard Gabhart, who restored the house.

James Kaywell is the current owner.

The elder Magoffin (1773-1843), originally from County Down, Ireland, became a successful merchant in Harrodsburg, and president of the Commonwealth Bank of Kentucky.

He married Jane McAfee, daughter of Samuel McAfee, who was among the earliest settlers who came from Virginia to Harrodsburg in the 1700s.

The Magoffins had 10 children, including Beriah Jr.

Beriah Jr., born in 1815, graduated from Centre College in 1835, and the law department of Transylvania University.

He practiced law in Jackson, Mississippi for two years and in 1839, returned to Kentucky.

He married Anna N. Shelby, granddaughter of Isaac Shelby, first governor of Kentucky. They lived in a mansion built for him by his father, which has been destroyed.

In 1850, he was elected to the state Senate. He defeated Joshua Bell in the race for governor in 1859.

He resigned as governor in 1862 after finding his views and acts as a strong Southern sympathizer at utter variance with the dominate party in the state legislature.

He returned home to Mercer County, and was elected to the state legislature in 1867, his final service in office. He served until 1869.

He died Feb. 28, 1885, and is buried in Spring Hill Cemetery, where a  monument has been erected in his honor.

Magoffin County was created in 1860 and named for Magoffin.