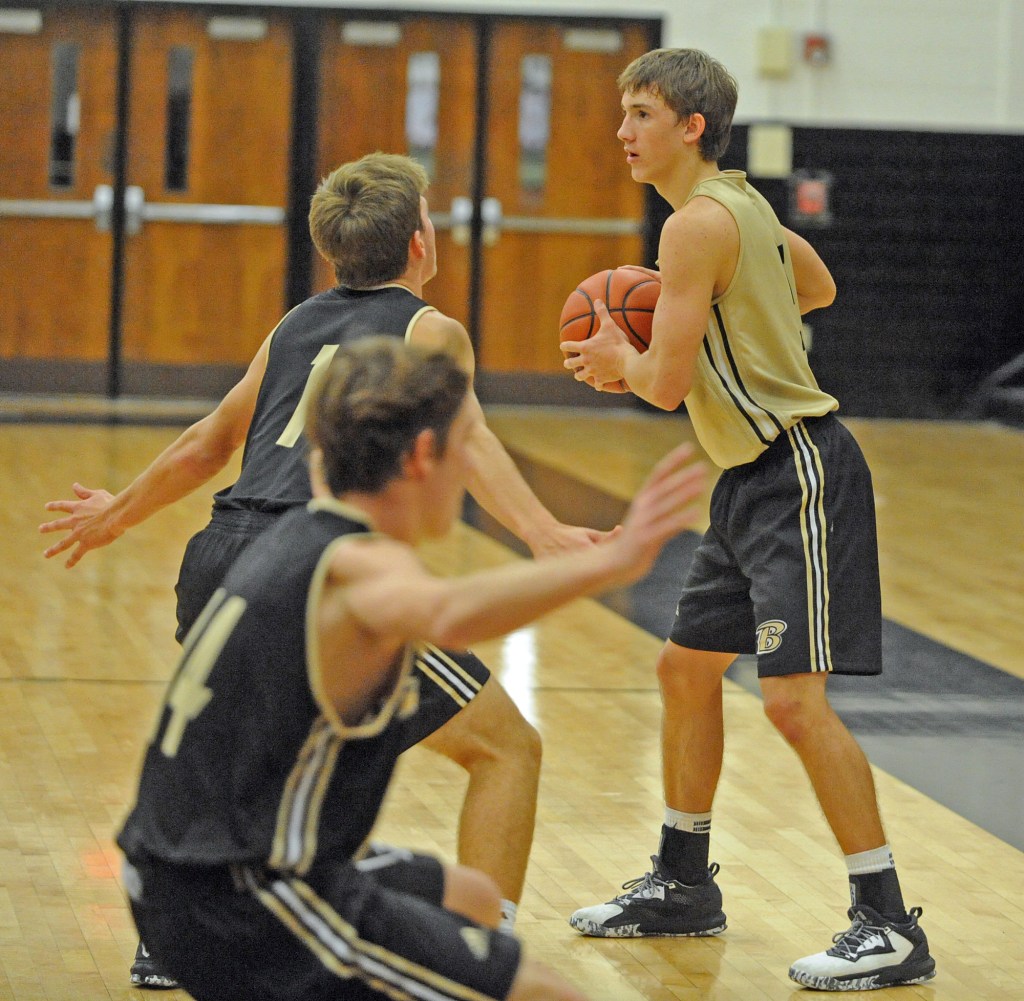 Matt Overing/matthew.overing@amnews.com Bryce Slone is Boyle County's leading returning scorer and will be tasked again with creating on offense for the Rebels this season.

But the Rebels are excited to see what new possibilities are on the horizon this season with an inexperienced but athletic squad.

“I think we’re going to be playing a lot quicker this season,” junior guard Bryce Slone said. “We’ve got backups that can come in and take mine and J’s spot, last year we didn’t have that. We did lose Colton, but Will (Bramel) is going to be a good presence, maybe not as much with blocking, we’ll have to play better perimeter defense, but Will will be able to hold his own in the post.”

“J” is Jason Alexander Jr. — often referred to as “Baby J.” Alexander and Slone are the only two Boyle players who played more than half of the Rebels’ games last season. As starters, the pair combined for 22.3 points per game and had the two highest three-point and free-throw percentages on the team. They were the only two Boyle representatives on the 12th Region All-Tournament team.

Bramel is a well-known commodity on the football field, winning the Lineman of the Year award for his dominance as an offensive tackle. But in basketball, Bramel is relatively unknown after spending a majority of last season behind Elkins.

Alexander, Bramel and Slone will be three constants for the Rebels this season. After that, the roster has talent mixed with inexperience.

“After those three, we have our two seniors, who have really been doing well,” coach Steve Adams said. “Dylan Frederick and Evan Shields, they just don’t have a lot of game experience. But they’ve been doing a nice job. After those two and the three that have minutes, we’re very, very young.”

“Really, it’ll just depend on how quickly they adapt and learn and continue to get better. With our schedule, especially in December, that’s how we’ll get better. Once we get through that and learn, we’ll know what our weaknesses are. Then we’ll continue to work on those through the middle part of our season schedule. Hopefully that’ll get us ready so at the end come tournament time, we’ll be a seasoned team and ready to make some noise.” 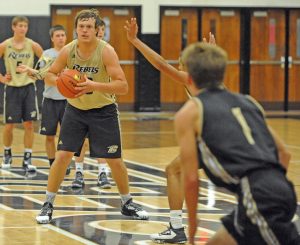 Matt Overing/matthew.overing@amnews.com
Boyle County junior Will Bramel makes a pass during practice. Bramel will be the starting center for the Rebels this season after years practicing behind Colton Elkins.

Frederick and Shields are big bodies that could give Bramel a break down low. Adams said Landen Bartleson — a freshman known for his speed on the football field — could also develop into a post player.

“We’ve moved Dylan Frederick into the post, and we’re hoping Landen Bartleson can give us some things there as well,” Adams said. “By the end of the year, I think we’ll have good depth. Because we don’t want Will playing scared or playing not to foul. We just want him playing. I think we’ll be better in that situation than a lot of people think.”

Bramel’s talent on the offensive end will turn some heads this season, Slone said.

“Nobody knows who Will is because he pretty much played JV all last year, he’s been on the bench for varsity two years in a row,” Slone said. “He would be the only one in practice that could score on Colton last year. He’s got a lot of tricks up his sleeve, he’ll be able to score a lot this season.”

Scoring will be a big question mark for Boyle after losing Elkins and Josiah Robbins in a class of seven seniors. But Alexander said he and Slone have been putting in the work in the offseason with coach Brian Britt at Centre College: About 2-4 hours each day drilling, playing one-on-one, and pickup games with college student-athletes.

“Mainly, I worked out with Coach Britt, me and Bryce, we have a membership over at Centre so we’re over there every day working on my shot, working on him getting to the bucket, just trying to add different dimensions to our game for this year,” Alexander said. “Last year, I wouldn’t say I was comfortable shooting the ball. This year, I feel a lot more comfortable with my jump shot.” 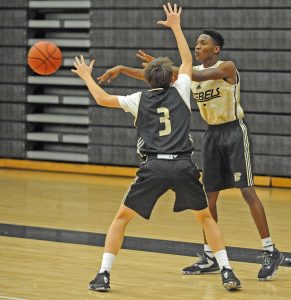 Matt Overing/matthew.overing@amnews.com
Jason Alexander makes a pass during practice. Alexander will be called upon to score more this season after averaging 9.4 points per game last year.

Alexander knows he’ll be called upon to score more this season.

Having that confidence is vital for the young players, Slone said.

“It’s a mind game a lot of times, that’s how it has been for me,” he said. “Confidence is huge. Like that first scrimmage game, that helped us gain confidence because it’s always good to get a win.”

Adams said three freshmen have stood out so far this preseason: Bartleson, Reese Smith and Grant Hotchkiss. Sophomore winger Will Imfield is another talented underclassman that Could see early minutes for the Rebels.

“They’re a little bit further ahead than the others, but the freshmen that played in the JV scrimmage did an excellent job,” Adams said. “They just like to compete. They don’t want to lose. That’s bringing a different type of toughness. that we may not have had in the past.”

Alexander said the newcomers will bring a different look on offense for the Rebels. 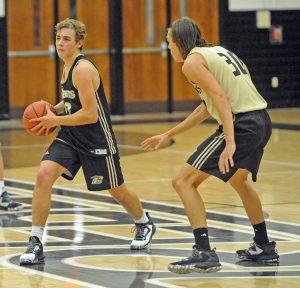 Matt Overing/matthew.overing@amnews.com
Grant Hotchkiss is one of three freshmen who coach Steve Adams said are standing out early on for the Rebels.

But it always comes back to toughness for Boyle. The Rebels won’t always have the size or skill advantage, but Adams wants the “toughness” advantage each night.

“When we say toughness, we don’t necessarily mean “tough” where you’re fighting people or beating people up, being physical,” he said. “We’re talking both mental and physical toughness, where we make the right play and are in the right position consistently and doing the right things. Making the tough plays when they need to be made. We try to put the kids in a position every day where it’s pretty tough on them so they get used to being in tough situations. Hopefully when we get into game situations, it’s a little bit easier.“