Danville girls basketball: Guards will lead the way in 2016-17 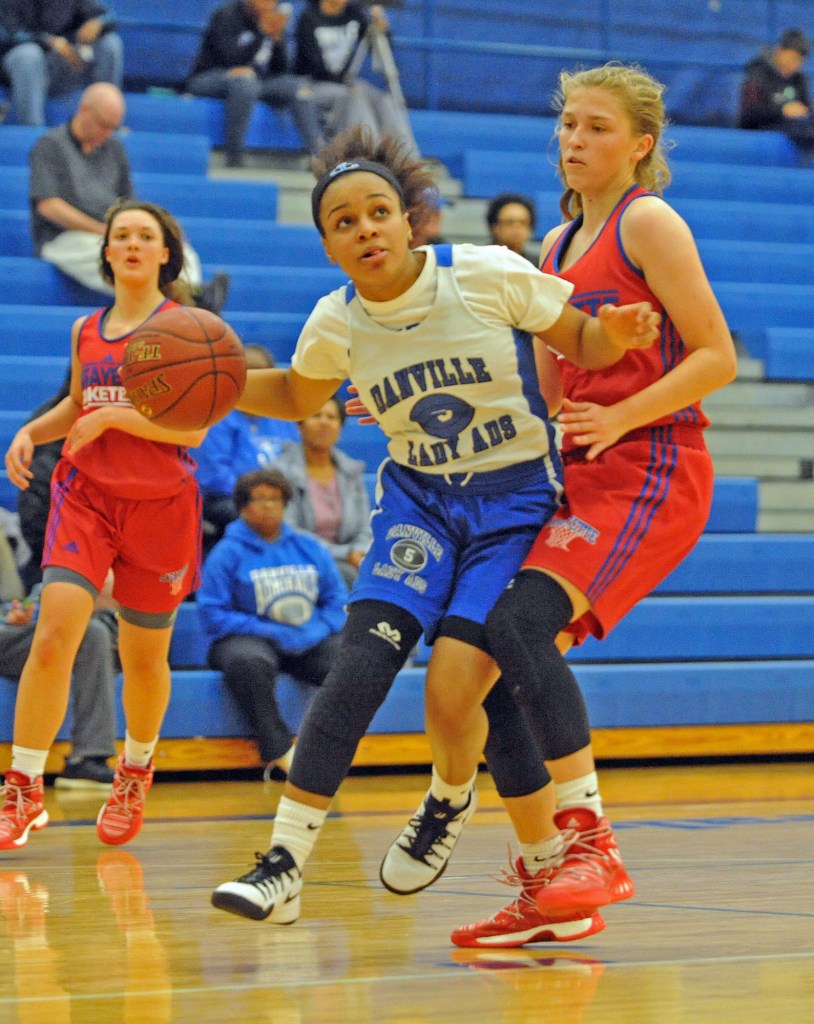 Matt Overing/matthew.overing@amnews.com Danville's Ivy Turner, along with teammates Alyvia Walker and Zenoviah Walker, will lead the Admirals from the perimeter this season.

Michael Menifee’s first season in charge at Danville was a slow starter, but by the end, the Admirals were rolling.

Danville finished 16-16, winning 10 of its last 14 regular-season games. The Admirals also made a surprising visit to the 12th Region tournament after beating Boyle County in the 45th district semifinals.

This year, the Ads are hopeful to accomplish more.

“We’re still working, I think they understand me, I understand them a little bit better,” Menifee said. “We’re really excited about this season and we’ll see what we can do, hopefully accomplish some things that haven’t been accomplished here. We’re going to keep working. The first two scrimmages, we had a little rust, especially shooting free throws and getting adjusted to this new basketball. But all in all, we’re coming along and I think we’re about where we should be.”

Danville will rely on its trio of guards — Alyvia Walker, Zenoviah Walker and Ivy Turner — to lead the team this season.

“They’re helping the younger ones and they’re helping some of the new girls,” Menifee said. “Understanding the concepts, understanding my terminology and what I want to get done and how we want to play. They’re really good leaders in that way. They’re good leaders in the way they play, the way they practice. They come and compete and that carries over with the young ones, showing them how to play, compete and be a Lady Admiral.”

Alyvia Walker said one of the keys for the team this season is playing at their pace.

Alyvia Walker led the team with 17 points per game last season. Now a senior, she’s looking to take more of an active leadership role this season. She and fellow seniors Dora Swann, Kennedy Walker and Zenoviah Walker and junior Kirby Alcorn were a part of Danville’s Sweet 16 run in 2014.

“We’ve got some seniors who have been with this program for five or six years, they’ve been to a Sweet 16, they’ve been to the finals of the All A,” Menifee said. “We’re going to try to duplicate that and send them out that way if we can.”

For that to happen, Alyvia Walker said consistency in practice is a must.

Menifee hopes his team’s injury problems won’t be as rough as they were at the start of the season.

“That’s our biggest key,” Menifee said. “Last year, we started out, Ivy got hurt in our second scrimmage. Novi got hurt before that scrimmage, then the second game of the year against Dunbar, she sprains her ankle. Ivy is out, we’re basically playing Alyvia, Kennedy and some eighth graders because Kirby had broken her finger.

“We need to be injury free and add some depth. Some of those younger girls are stepping up, coming in and playing mistake free basketball and playing solid defense, give those guys a breather. Because they need it in order to play against the teams we’re going to be playing.”

Carolina Gonzalez and Ikiah Burgess are two freshmen who were relied on as eighth graders last season and will be asked to step up and play more this season. DCA transfer Sarah Belcher is another new face that could see time on the court for the Ads.

Developing that youth and developing another option inside after Kennedy Walker is a must for Danville, Menifee said.

“We’ve been working all fall with Kennedy, really about understanding positioning and sometimes giving up that two points because we’re going to need her later in the fourth quarter,” Menifee said.

Menifee and the Admirals will have a challenging non-district schedule during the first half of the year, and that’s when Menifee expects to have that depth and experience sorted out. It will take time — maybe more time than the coach wants — but he’s happy with where his team is right now.

“They’re getting that, and that’s rough at this time of the year, because as a coach, you want to get in and be in here every day,” he said. “But you have to know there’s a human aspect, people need family time. You have to take off during Thanksgiving. I want to be with my family. We’re going to have enough time to practice, it’s a long season. But the good thing about it is, they come in and refocus.”